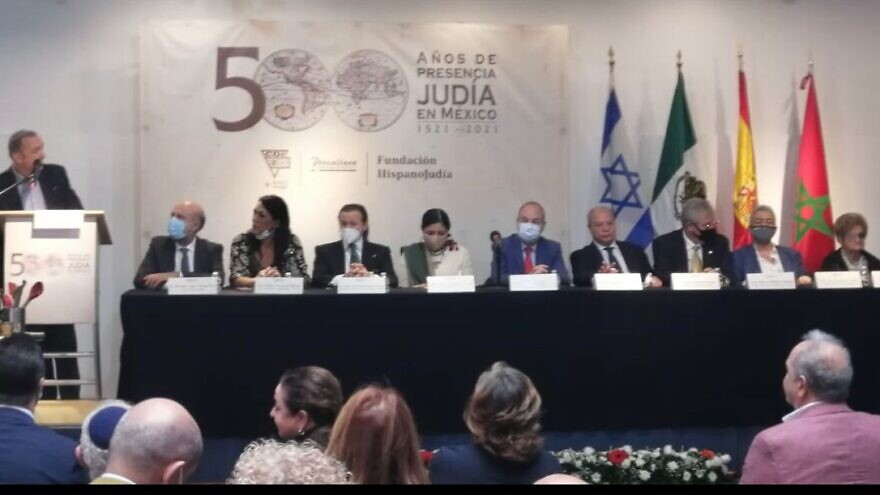 An event in Mexico celebrates 500 years of a Jewish presence in the country. Credit: Courtesy.
Spread the word.
Help JNS grow!
Share now:

The Fundación HispanoJudía (FHJ) and the Centro Deportivo Israelita de México (CDI) have organized a month-long series of events to celebrate 500 years of Jewish presence in Mexico.

The events, which relate to history, art and culture, are running from Oct. 31 to Nov. 28. Among the dignitaries participating were Alejandra Frausto Guerrero, Minister of Culture of Mexico, Juan López-Dóriga Pérez, Ambassador of Spain to Mexico, Zvi Tal, Ambassador of Israel to Mexico, and Abdelfattah Lebbar, Ambassador of Morocco to Mexico.

“Today, and I say this with great sorrow, Mexico is probably one of the few countries in the world where Jews can openly and fearlessly express their Judaism,” said the Israeli ambassador.

Tal went on to say that he had been struck by “the admiration that Mexican Jews feel towards the country in which they live, the country that has opened its arms to their ancestors, giving them the same opportunity to study, do business, and to succeed.”

He went on to express his gratitude for the way Mexico took in the Jews arriving from Spain: “We cannot speak of the expulsion of Jews from Spain without mentioning Mexico, the country that welcomed us and offered us a new life, opportunities, a new nationality and freedom of worship.”

The FHJ is a nonprofit organization, created with the goal of remembering and celebrating Sephardic and Hispanic heritage, as well as educating about the many common values and traditions between Jewish and Hispanic cultures. The foundation has associations in Mexico, Argentina, Panama, Israel and the United States.

The Centro Deportivo Israelita was founded in October 1950 and currently has approximately 18,000 associates, who offer the most diverse sports, social, recreational, cultural and artistic activities, all within the framework of Jewish identity.