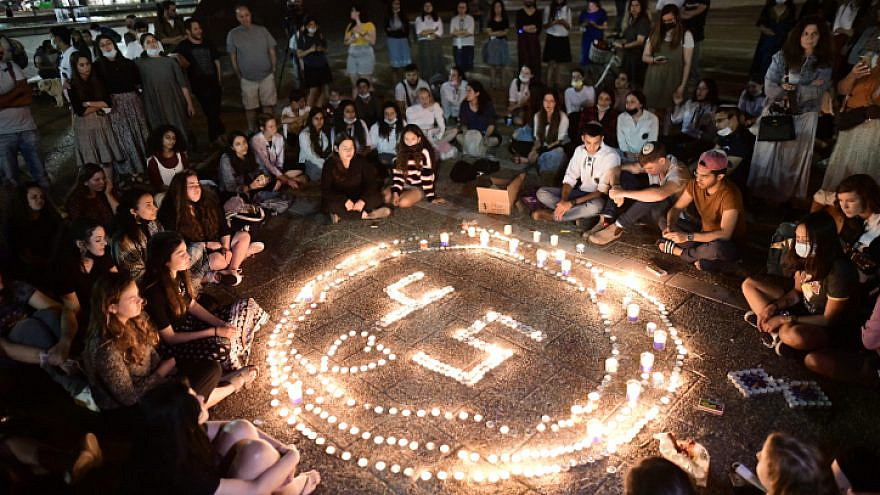 Israelis light candles for the 45 victims who were killed in a stampede at Mount Meron during the Lag B'Omer celebrations, at Rabin Squarein Tel Aviv. May 2, 2021. Photo by Tomer Neuberg/Flash90.
Spread the word.
Help JNS grow!
Share now:

(May 26, 2021 / Israel Hayom and JNS staff) Israel’s National Insurance Institute (NII) is proposing compensation in the amount of 100,000 shekels ($30,800) for each of the families who lost loved ones in the Lag B’Omer stampede at Mount Meron. A total of 45 participants in the festivities, including children as young as 9, were killed.

The investigation into the Mount Meron disaster is still underway, and a government commission of inquiry has not yet been formed, though Israeli lawmakers on Monday approved the fast-tracking of a bill to establish one.

At the request of the Knesset Finance Committee, which is chaired by Knesset member Moshe Gafni of the ultra-Orthodox United Torah Judaism Party, National Insurance Institute director general Meir Spiegel sent Gafni a draft version of the proposal for compensation.

The NII is suggesting that families who lost one relative be paid 100,000 shekels ($31,000), and families who lost more than one loved one be paid 130,000 shekels ($40,000) per victim. In addition, the NII is offering further compensation for relatives, depending on the number of family members. The additional payments would apply to victims’ children aged 20 and under, and widows aged 67 and younger.

The NII explains in the letter to Gafni that the monetary compensation would be awarded in addition to existing NII rights or compensatory damages ruled by a court.

The document also addresses compensation for people left disabled by injuries sustained in the stampede. The NII is calling on the government to recognize the Mount Meron incident as a “national disaster,” which would entitle the victims to government assistance.

The NII did not pull the suggested framework for compensation out of thin air. The letter points to existing compensatory arrangements that were based on a public commission established to investigate the collapse of the Versailles event venue in Jerusalem 20 years ago, in which 23 guests fell to their deaths when the upper floor of the building collapsed, and 380 more were left injured.

Following the Versailles affair, the Knesset passed a law to help survivors and bereaved families that included the formation of a dedicated committee charged with handling the injured and paying out compensation.

Spiegel pointed out that in the case of Versailles, the compensation to the families came entirely from the government, and was disbursed through the NII.