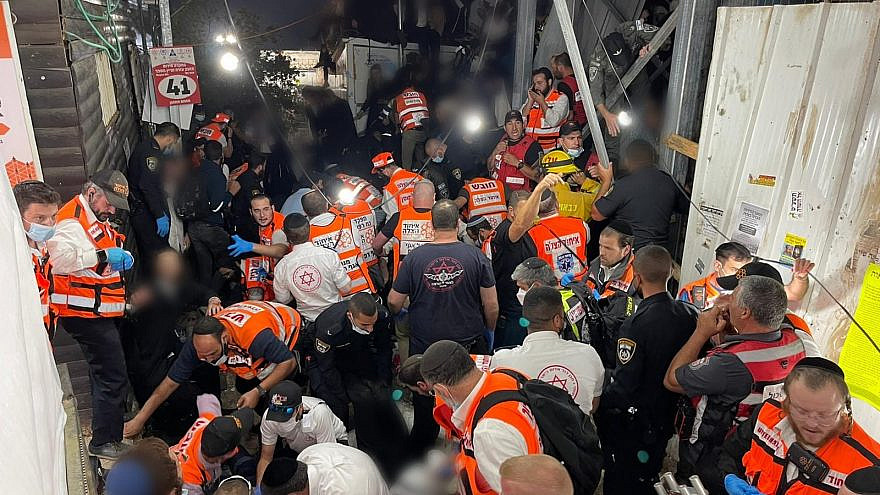 (April 29, 2021 / JNS) Dozens of Israelis have been reported killed and injured in an apparent stampede during Lag B’Omer commemorations in Meron, in what is being called one of the largest peacetime disasters in the nation’s history.

According to Magen David Adom, at least 38 people have been killed and 65 injured, including six in critical condition, 18 injured severely, two moderately and 39 lightly injured.

“MDA is fighting for the lives of dozens wounded, and will not give up until the last victim is evacuated,” it said.

“We just finished treating one of Israel’s worst disasters. A terrible disaster of people who came to celebrate Lag B’Omer and were unfortunately crushed to death,” said United Hatzalah vice president of operations Dov Maisel.

“This was a very difficult site—sites that we have not seen here in Israel since the worst days of the terrorist wave back during the early 2000s,” he said.

Vice President of Operation Dov Maisel speaks about the tragic incident at Meron and the work of the UH team there. pic.twitter.com/Xk7PesL6zS

The incident occurred as thousands of religious Jews were pushing each other down a crowded corridor and staircase. Victims were crushed under streaming crowds as emergency workers struggled to reach the scene. Many of the injured were evacuated to hospitals across the country.

The cause of the stampede was not immediately clear.

More than 100,000 worshippers had gathered at the foot of Mount Meron in northern Israel as they do annually to mark the holiday, gathering to visit the gravesite of Rabbi Shimon Bar Yochai and study texts. Bonfires are part of the tradition there and throughout the country.

Israeli officials had expressed concern about possible overcrowding at the site after last year’s festivities were canceled due to the coronavirus pandemic.

“A serious disaster on Mount Meron,” said Israeli Prime Minister Benjamin Netanyahu. “We are all praying for the recovery of the injured. I ask to strengthen the rescue forces operating in the area.”

Similarly, Israeli President Reuven Rivlin said he is following reports from Meron with “great anxiety” and praying for the wounded.