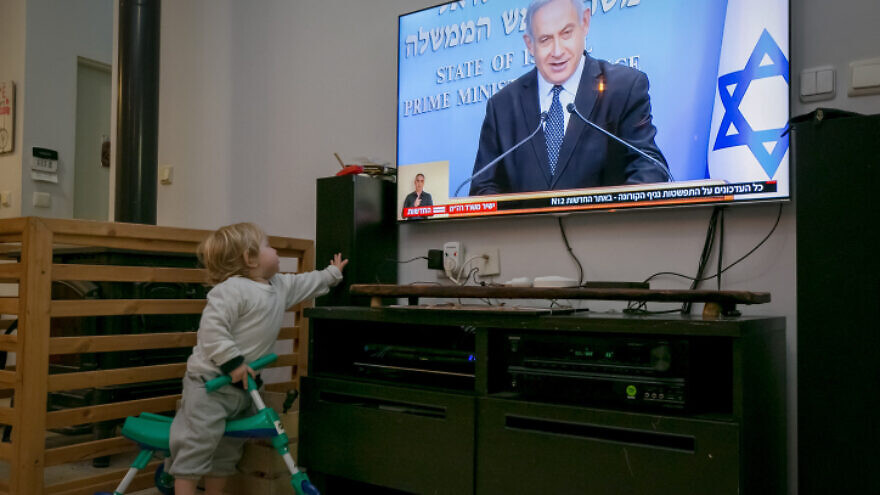 A child watches as Israeli Prime Minister Benjamin Netanyahu holds a live press conference on the new government restrictions for the public regarding the COVID-19 crisis on March 19, 2020. Photo by Chen Leopold/Flash90.
Spread the word.
Help JNS grow!
Share now:

(March 22, 2020 / JNS) Israeli Prime Minister Benjamin Netanyahu said on Saturday night that his Likud Party and rival Blue and White Party had reached agreement on the outlines of a national unity government, and called on Blue and White leader Benny Gantz to sign the deal, saying “millions of Israelis are waiting for us.”

During an interview with Israel’s Channel 12, Netanyahu said he and Gantz had agreed to a rotation deal under which Netanyahu would serve as prime minister before handing the post over to Gantz. Addressing Gantz, Netanyahu vowed to “leave office on the agreed date,” with “no shticks and tricks.”

Under the terms of the deal, Likud would take the prime ministerial, finance and Knesset speaker posts, with Blue and White receiving deputy prime minister, and the defense and foreign ministries, before switching after a year-and-a-half. The Justice Ministry would be either split or led by an outsider.

Netanyahu added that while Likud was ready to sign on the dotted line, that would change if Blue and White and its center-left bloc moved to oust Knesset Speaker Yuli Edelstein.

The center-left bloc moved to force a vote replacing Edelstein before the speaker shuttered the Knesset on March 18, citing concerns over potentially exposing legislators to coronavirus infection.

Israel’s Supreme Court is expected to rule on Sunday that Edelstein must reopen the Knesset and enable the formation of committees, as well as allow a vote on who will take over the post of Knesset speaker.

Gantz responded on Twitter, “Those who want unity do not work with ultimatums and harmful leaks and certainly do not try to hurt our democracy and citizens by paralyzing the Knesset.”