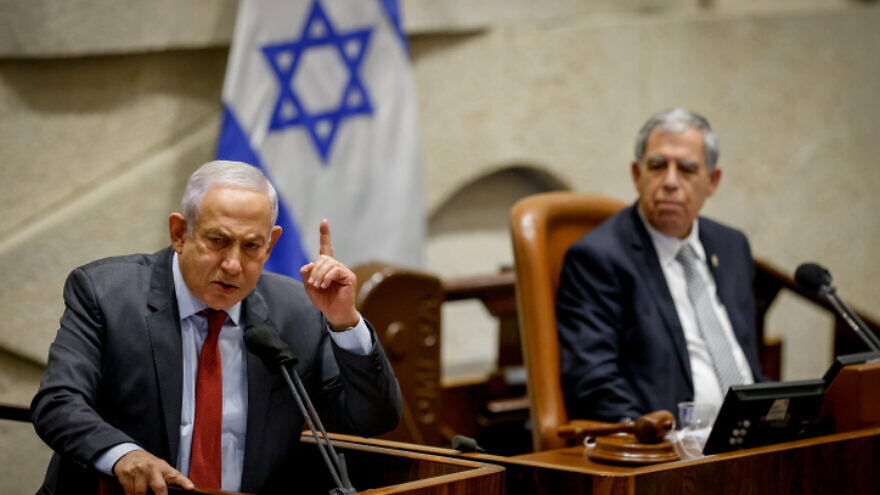 (February 22, 2022 / Israel Hayom) Israeli opposition leader Benjamin Netanyahu warned on Monday that the nuclear agreement being finalized between world powers and Iran in Vienna would give Iran a path to a nuclear weapon and urged Israeli decision-makers to actively campaign against it.

Speaking with i24NEWS, the former prime minister said that “the right policy from Israel’s point of view should be to speak out against it.” Israel’s current government could follow the path he took in railing against the 2015 Joint Comprehensive Plan of Action (JCPOA), he said.

“Look, I went to the U.S. Congress to speak out against the sitting American president. I didn’t do that lightheartedly. I knew that I was doing something unprecedented, but I knew the survival of my country, and in my opinion the survival of many countries, was at stake, so I did it. I spoke at U.N. forums, I spoke on endless television interviews, I did everything I could to mobilize the Senate and Congress against this, what I thought, was a dangerous agreement for the U.S., for Israel and for everyone else,” said Netanyahu.

The United States unilaterally exited the JCPOA in 2018 and reimposed sanctions on Tehran, but according to various reports over the past several days, it may soon conclude a new agreement with Iran, effectively ending the Trump administration’s “maximum pressure” policy.

Netanyahu said on Monday that negotiators in Vienna must leave the table if they do not get a good deal. They must insist on “a deal that forces Iran to dismantle its nuclear military infrastructure, that doesn’t let them develop their ballistic missiles to deliver a weapon, that stops weapon development, that stops terror, that ties the progress in lifting the restrictions on Iran to Iran’s behavior—not to the … calendar, which is what this deal does,” he said.

“The most important thing to say is with a deal or without a deal, Israel must do what it needs to do, to defend itself against this extraordinary threat to its existence and its future.”