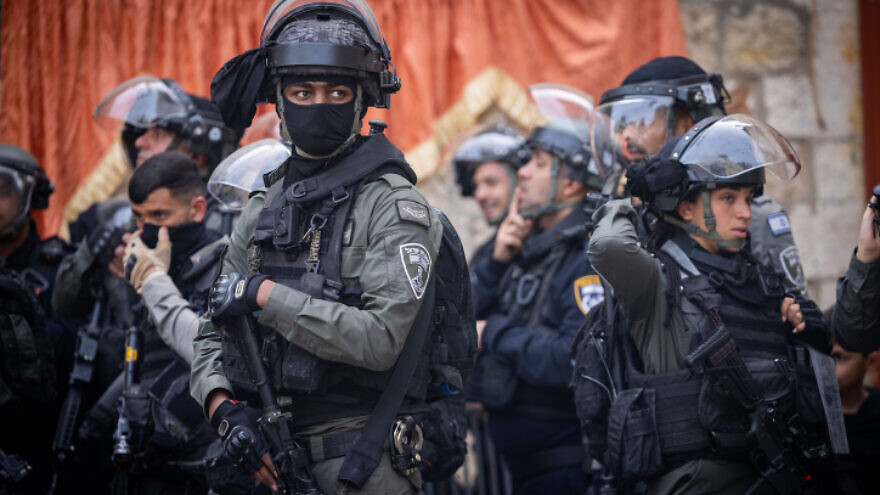 (April 21, 2022 / JNS) Dozens of masked rioters used “severe violence” during clashes with Israeli security forces at the end of dawn prayers on the Temple Mount in Jerusalem’s Old City on Thursday morning, according to the Israel Police.

In a statement, police said that the rioters entered the Al-Aqsa mosque in the morning, “closed its doors and continued to disturb the peace and riot, by throwing rocks and using fireworks, desecrating the mosque, where they are barricading themselves at this time.”

Law enforcement was doing “everything in its power to enable the public to worship freely,” the statement said, adding that officers were deployed outside the mosque “to provide security for visits and maintain order.”

The Red Crescent said it had treated 20 Muslim worshippers on the Temple Mount, some of them after exposure to tear gas, according to Kan News, adding that one of the injured is a Jordanian citizen.

On Wednesday, Palestinian rioters threw firebombs from inside the Al Aqsa mosque, one of which shattered on the entrance carpet of the site, causing a brief fire, while a second firebomb fell on the mosque’s doorway.

Police also warned that “Arab social-media networks continue to spread false, inciting and misleading information about events on the Temple Mount in an attempt to escalate the situation and misinform the public. It should be emphasized that many reports are out of touch with reality regarding events in the Temple Mount.”

“Israel has ensured and will continue to ensure and defend freedom of prayer, the status quo on the Temple Mount, and most importantly, the security of all the citizens of the area,” he stated afterwards.

“The terrorists who are throwing rocks and inciting violence on the Temple Mount are the ones that are harming the majority of the people who wish to celebrate Ramadan in peace,” said Gantz. “I call on Palestinian leadership and all the region’s leaders to act responsibly to ensure security stability and to expand the civil policy we aim to implement before Eid al-Fitr.”