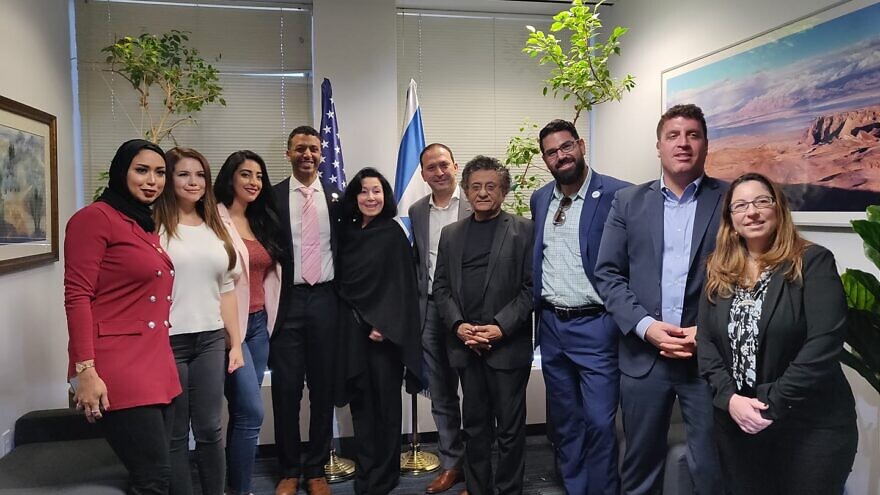 (November 12, 2021 / JNS) The Abraham Accords garnered headlines in 2020 as landmark normalization deals between the governments of Israel and Arab states. But more than a year later, advocates of the agreements are emphasizing their impact on everyday relationships between people.

During the second week of November, Sharaka—an NGO launched by Israeli, Emirati and Bahraini social entrepreneurs in the aftermath of the agreement’s signing—brought a delegation of young activists, leaders, thinkers and entrepreneurs from the Middle East and North Africa region on a speaking tour of California to promote the accords and a “new model for peace in the Middle East.”

“We were founded to ensure that the governmental agreements of the Abraham Accords are translated to the people-to-people level and create a warm, lasting peace,” Sharaka CEO and co-founder Amit Deri told JNS.

According to Sharaka’s head of communications and global affairs Dan Feferman, many observers were surprised to hear that message during the tour, which featured meetings and events with Jewish community institutions, the Democratic Party, politicians and activists, university and high school students, business and civic leaders, and the media.

“People in the U.S. are more focused on the conflicts, while we in the region are looking for ways to work together and have dialogue,” said Feferman, an Israeli scholar, speaker and podcaster.

Delegation member Hayvi Bouzo, a Syrian-born American journalist, also stressed that the Abraham Accords “represent a different kind of peace—a peace between people.” Although Syria has not normalized ties with Israel, the accords “actually made many more people in Syria come out and talk about wanting to have peace with Israel in a way we haven’t seen before,” she said.

Bouzo noted that on her talk show, called “Middle East Rise,” she has been pleasantly surprised to see an increasing number of Syrian listeners asking questions and exhibiting openness regarding the Abraham Accords. She said this marks progress from the entrenched “culture of hate in the Middle East and specifically in Arab countries” due to anti-Israel and anti-Semitic rhetoric promoted by the media and education systems.

Sharaka’s USA CEO, Omar el Busaidy, an Emirati Fulbright Scholar and entrepreneur, said that “it’s always going to be important for an Emirati to be present in discussions like this” because the UAE was the first country to normalize ties with Israel. While he initially believed that the accords would focus primarily on security, Busaidy said that today their most important accomplishment “is the depth of the cooperation in so many different fields between these two countries,” such as education and health care.

Following initial agreements by the UAE and Bahrain, two other Muslim-majority countries quickly signed on: Sudan and Morocco, the latter of which before 1948 was home to as many as 250,000 Jews.

Amazigh-Moroccan activist and artist Chama Mechtaly, an expert on Muslim-Jewish dialogue, explained that the difference between Morocco and Israel’s other nascent Arab allies is the fact that Morocco had already maintained lower-level diplomatic relations with the Jewish state since the signing of the Oslo Accords in the 1990s.

“In that sense, the Abraham Accords represent a renewal and reigniting of those relationships,” she said.

With more than 470,000 Moroccan Jews living in Israel, according to the Israeli Central Bureau of Statistics, as well as tens of thousands of Israelis visiting Morocco each year, the accords presented an opportunity for healing in relationships that were already relatively deep.

“For Israelis with a tough personal or family history, given the way they left Morocco, even those people are feeling very reunited with the culture and excited to return as visitors,” said Mechtaly.

At the same time, during Israeli Foreign Minister Yair Lapid’s recent visit to Morocco, Moroccan Foreign Minister Nasser Bourita maintained the government is approaching normalization with Israel in a manner that strives to advance a two-state solution. Bourita said that Israel and the Palestinians “badly need to start rebuilding trust and confidence between both parties.”

Still, Mechtaly believes government buy-in remains a victory in and of itself when it comes to the Abraham Accords. “Since we are in a region that requires leadership support, we can finally conduct this work of Muslim-Jewish dialogue in ways that are hopefully more sustainable and scalable,” she said.

“Even when politics fail and political deals collapse, we want to have enough of the social and cultural relationships between people so that they always have something to fall back on and something that will continue to deepen this Muslim-Jewish relationship,” said Mechtaly. “The Abraham Accords are opening the door for reclaiming the pluralistic, multicultural past of the region.”