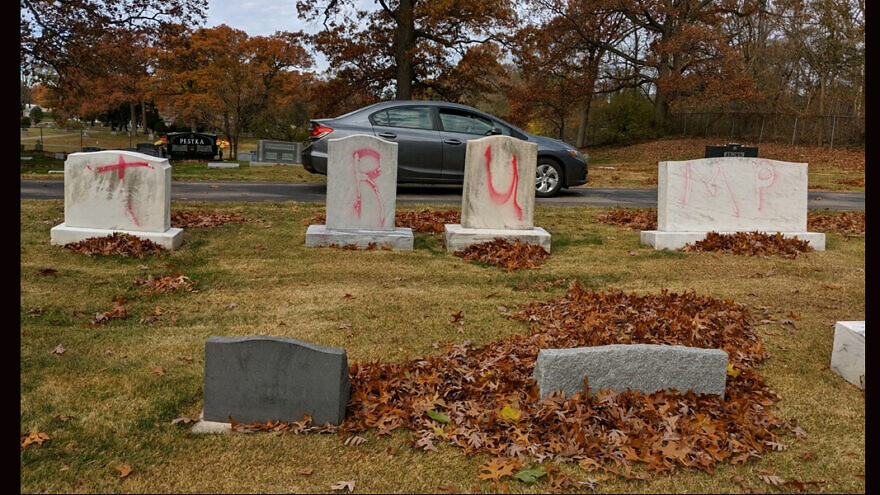 The cemetery in Grand Rapids belongs to Congregation Ahavas Israel, a 125-year-old Conservative congregation. The graffiti was found on Monday and is presumed to have happened over the weekend, according to Rabbi David Krishef.

The police have been contacted about the incident, according to Krishef.

However, both they and the local director of the Anti-Defamation League said it was too soon to deem the vandalism an act of anti-Semitism.

“It’s Halloween weekend, and there was nothing spray-painted that indicated anything specifically anti-Semitic,” Krishef told the Jewish Telegraphic Agency on Monday. “Whoever did this may or may not have known that this was a Jewish cemetery.”

“I don’t want to blow this up into a known and definite incident of anti-Semitism,” he added. “We don’t know that it was.”

ADL Michigan regional director Carolyn Normandin told JTA, “It was definitely vandalism and it was definitely political in nature, but we have no reason to call this straight-up anti-Semitism because there were no anti-Semitic symbols on the gravestones that were vandalized. We’re taking it seriously because it was a Jewish cemetery, and there were no other cemeteries or communal buildings in the area that were vandalized at the same time. Why did the vandals choose this cemetery?”

Out of 200,00 people who live in the city, the Jewish population numbers a little less than 1,000, Krishef told JTA.