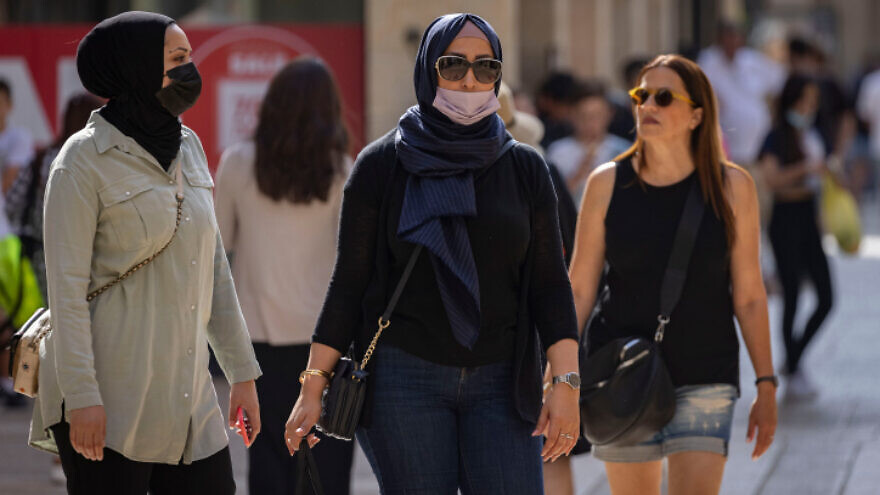 (July 12, 2022 / JNS) Nearly half of Arab residents of Jerusalem would prefer to become Israeli citizens rather than citizens of a Palestinian state, a poll published on Friday by the Washington Institute for Near East Studies revealed.

“As United States President Joe Biden prepares to visit Jerusalem, a June 2022 survey of the nearly 400,000 Palestinians there, commissioned by the Washington Institute and conducted by the Palestine Center for Public Opinion, shows that this public has reverted to relatively moderate positions—compared both to pre-pandemic polls and to West Bank attitudes today,” the Institute stated.

“This new trend is most vividly expressed on the bellwether question of citizenship options. Today, half (48%) of the city’s Palestinian residents say that, if they had to make a choice, they would prefer to become citizens of Israel, rather than of a Palestinian state. From 2017 to early 2020, that figure hovered around just 20%,” it added.

“Today, only a minority (43%) of East Jerusalemites say they would pick Palestine; while the remainder (9%) would opt for Jordanian citizenship.  Among West Bankers, the comparable figures are Israel, 25%; Palestine, 65%; Jordan, 10%,” said the Institute.

According to the findings, in east Jerusalem, 63% agreed at least somewhat with the following statement, “It would be better for us if we were part of Israel, rather than in Palestinian Authority or Hamas ruled lands,” said the poll, adding, “In the West Bank, the corresponding figure is less than half that proportion (28%).”

The statistical margin of error of the poll was listed as 6%.