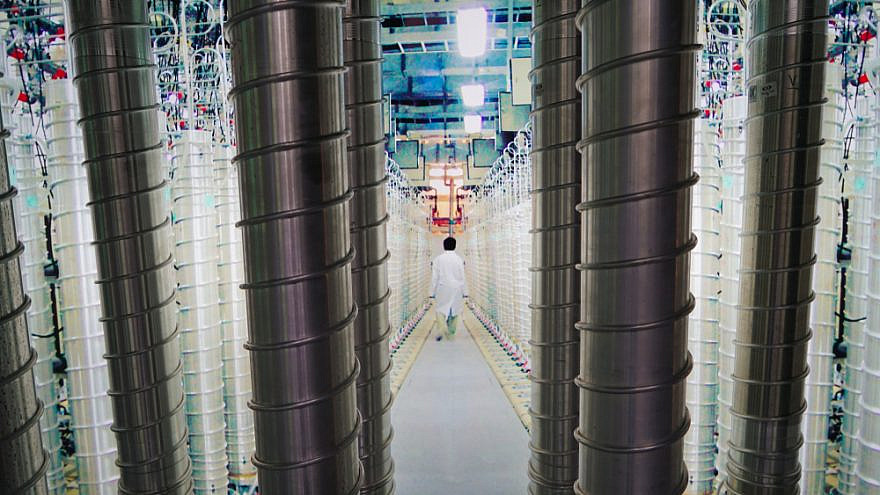 (July 6, 2021 / JNS) The reported June 23 blast that rocked a building linked to Iran’s nuclear program in the city of Karaj, west of Tehran, appears to have disrupted the ability of the Islamic Republic to feed key nuclear program sites with new centrifuges.

According to international media reports, an explosive suicide drone slammed into the building last month. Iran later confirmed that the site is state-owned.

Hours after the incident, Iranian state media claimed that security forces were able to foil “an act of sabotage” against a building belonging to the Atomic Energy Organization of Iran, and that there were no casualties or damage.

On Tuesday, the official IRNA news agency quoted Iranian cabinet spokesman Ali Rabiei as accusing Israel of being behind the attack. Rabiei claimed the attack was designed to torpedo ongoing nuclear talks between the Islamic Republic and world powers in Vienna.

“Whatever sabotage has happened, our strength has increased,” he said, seemingly contradicting earlier Iranian claims that the attack caused no damage.

Jonathan Ruhe, director of foreign policy at the Jewish Institute for National Security of America (JINSA), told JNS that the blast looks like it was designed to “disrupt centrifuge supply lines for both Natanz and Fordow [Iran’s two main uranium enrichment sites].”

He added that “unlike Iran’s declared nuclear facilities, where activities were regularly included in IAEA [International Atomic Energy Agency] reports, relatively little is publicly known about this facility in Karaj, other than it being part of the centrifuge supply chain for Iran’s uranium enrichment program at Natanz and Fordow.”

Any successful strike against the Iranian nuclear program’s centrifuge supply chain would need to “appreciably delay one of Iran’s key nuclear ambitions,” said Ruhe, listing this as the ability “to replace its existing enrichment workhorse—the rudimentary IR-1 centrifuge—with much more productive models like the IR-2m, IR-6 and IR-8 that could ramp up enrichment capability very quickly.”

On July 3, the Twitter account of the Intel Lab brand, which is made up of intelligence analysis professionals from around the world, released satellite imagery showing a significantly damaged structure at the Karaj site. It described the site as a “suspected centrifuge manufacturing facility” and showed pieces of the roof missing, as well black discoloration caused by fire.

Placing the June blast in a wider context, Ruhe recalled that on April 11, a blast tore through the Natanz active enrichment site, which according to JINSA’s assessment likely took some 5,000 IR-1 type centrifuges offline. In July 2020, a blast targeted a centrifuge assembly center at Natanz, according to media reports.

“After covert strikes in July 2020 against another Iranian centrifuge production facility and in April 2021 against its actively enriching machines, a manufacturing plant like Karaj became much more of a chokepoint,” said Ruhe.

“Therefore, taking it offline, even partially or temporarily, would represent another significant setback in Iran’s ongoing efforts to grow its enrichment infrastructure and quickly cut breakout time, even if its fundamental ability to produce enough fissile material for a bomb remains intact.”

On July 5, a large fire reportedly broke out at a factory near Karaj. Media reports said the purpose of the factory was not immediately clear.

The Iranian ISNA news agency quoted the Tehran Fire and Rescue Services as saying that the warehouse was used to store “all kinds of goods.”