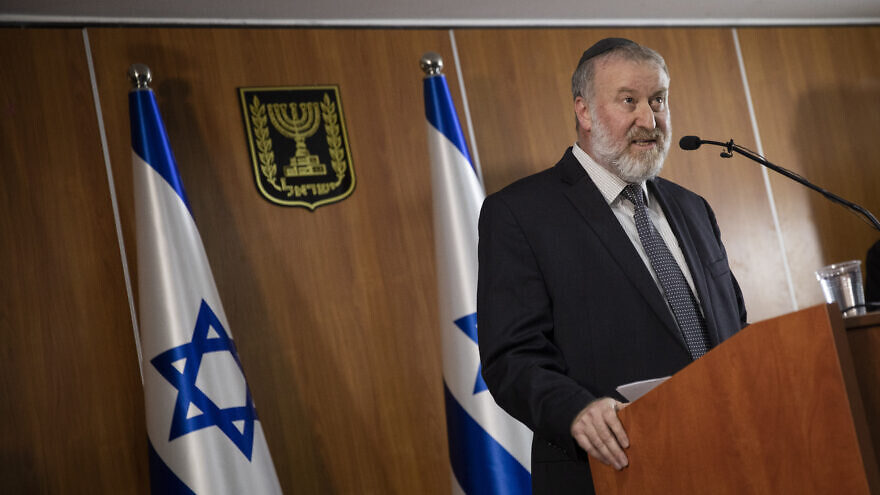 (September 8, 2020 / Israel Hayom) Senior police officers and officials at Israel’s State Attorney’s Office allegedly covered up a serious conflict of interest on the part of a senior investigator involved in cases against both Prime Minister Benjamin Netanyahu and his wife, Sara, Channel 12 News claimed Monday.

The officials decided to turn a blind eye to the issue so as not to derail the criminal proceedings against the prime minister, the report said, adding that State Comptroller Matanyahu Englman was looking into the matter.

According to the report, Police Superintendent Avi Rotenberg of the Major Crimes Unit, a lead investigator in the case alleging that Sara Netanyahu misspent public funds, failed to disclose to his superiors that he was romantically involved with Judy Nir-Mozes, the sister of Yediot Achronot publisher Arnon Mozes.

The latter has been charged alongside Netanyahu in Case 2000, which centers on allegations that the two attempted to work out an illegal quid pro quo deal whereby Yediot would soften its aggressive anti-Netanyahu stance in return for the prime minister using his influence to curtail the activities of rival daily Israel Hayom.

Nir-Mozes, the ex-wife of former Israeli Foreign Minister Silvan Shalom, is a media personality and a stakeholder in Yediot Achronot.

According to the report, Rotenberg denied rumors of his relationship with Nir-Mozes and as a result, remained privy to details about the investigations against Netanyahu, including Case 2000.

When then-Major Crimes Unit commander Maj. Gen. Roni Rittman learned of Rotenberg’s relationship with Nir-Mozes, he opted to handle the issue himself and reassigned Rotenberg to another case rather than report the matter to the Police Internal Investigations Department—a division of the Justice Ministry—as protocol demands, according to Channel 12.

Channel 12 News reporter Amit Segal, who broke the story, said the issue only came to light after Rotenberg’s wife approached the police and warned she would go public with the information.

Law enforcement officials said the revelation called into question the integrity of the investigative process as a whole, and senior Likud officials called for an investigation into the claims presented in the report.

Netanyahu called the news report “shocking” and likened the revelation to an “atomic bomb.”

“Shocking! Amit Segal just dropped an atomic bomb proving—with correspondence between senior police and State Attorney Office officials—this is how the prime minister was framed, with criminal acts and obstruction of justice,” he tweeted, adding the report was proof that corruption cases against him were contrived.

The Justice Ministry issued a statement saying that the nature of the information presented in the report was “horrifying.” The issue must be investigated, said the ministry.

The State Attorney’s Office called the allegation “baseless lies,” saying in a statement that “all of the decisions made in the case were based solely on the evidence. Efforts to connect these decisions to the cases against the prime minister are ridiculous and conspiratorial.”

Rotenberg, now a lawyer in a private firm, issued a statement saying, “There was no connection between my acquaintance with Judy Nir-Mozes and the way the investigation was handled. There was no hidden agenda.”

He stressed that he was never made privy to materials from Case 2000.

The Police Internal Investigations Department dismissed the allegations as “bogus,” saying that once it learned of the conflict of interest in the case “it looked into the matter without delay. A review of the issue and the subsequent recommendations resulted in a decision to close the case.”

Israeli Public Security Minister Amir Ohana said, “It’s sad to see corruption in law enforcement outside of a TV series. Unfortunately, not all coalition partners are committed to fighting the practice of placing [political] agendas above getting to the truth.”

Yamina leader Naftali Bennett called for a “full and fearless investigation of Amit Segal’s report, which shed a harsh light on law enforcement in Israel. This matter must be investigated and dealt with fully—that’s the only way to restore the public’s faith in law enforcement.”

The Movement for Governability and Democracy called on lawmakers from across the political spectrum to demand the formation of a parliamentary commission of inquiry into the information revealed in the report.