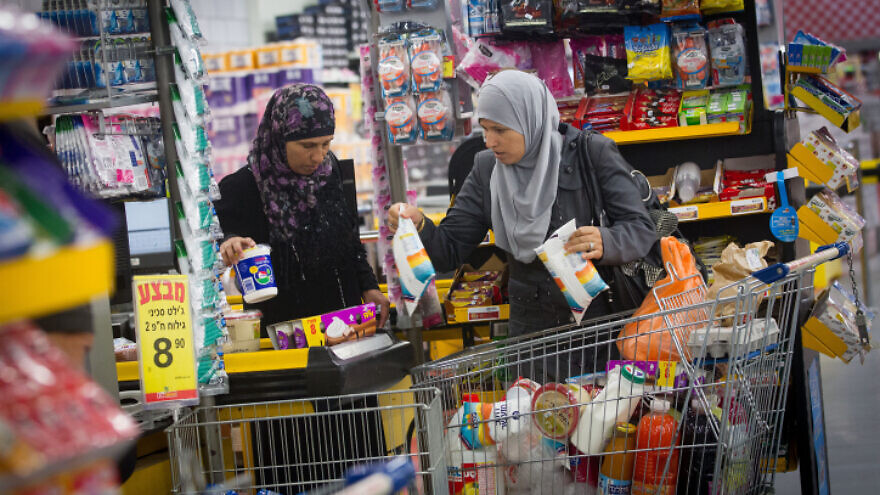 (March 17, 2022 / JNS) The Arab sector in Israel is modernizing, according to Nasreen Haddad Haj-Yahya, director of the Arab Society in Israel program at the Israel Democracy Institute (IDI).

Haj-Yahya is co-author of a new report—the Annual Statistical Report on Arab Society—published on Thursday by IDI, which supplies an overview of the changes taking place in what she called a “dynamic” society.

The report shows an increase in higher education and employment among Arab women, alongside a spike in crime and poverty rates.

“Internal developments that have taken place in Arab society in recent years are clearly reflected in the numbers and data presented in the report,” Haj Yahya and her colleagues Muhammed Khalaily and Arik Rudnitzky said in a statement. “The rise in the standard of living, life expectancy and education, along with the decline in fertility rates, the change in the structure of the Arab family, and the desire to realize individual aspirations at the expense of collective values. These factors are undermining traditional patterns and revolutionizing Arab society.”

They said that the real “revolution” in the last two decades is reflected in the “dramatic rise” in the number of Arab Israelis enrolled in higher education programs—something that will not only affect Arab society but also Israeli society at large.

“The level of expectations and aspirations for the self-realization of the Arab citizens are on a steady upward trend,” they said.

However, they noted that the gaps in quality of employment and the level of compensation between Jews and Arabs has not yet closed. 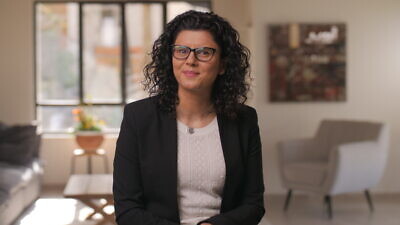 Haj-Yahya said that the report, which pulls together data that was otherwise disparate and largely inaccessible, is meant to help government decision makers and NGOs make smarter decisions about their investments in and programs for the Arab community.

Today, there are around 1.9 million Arabs living in Israel—including almost 362,000 Arab residents of eastern Jerusalem who hold “permanent resident” status but not full citizenship—out of a population of 9.3 million, according to the country’s latest population report.

The majority of Arabs are Muslim (82.9%), though there are sizeable communities of Druze (9.2%) and Christians (7.9%). Communities in northern Israel, and the mixed cities, tend to have more diverse Arab populations, the Triangle region and the Negev have exclusively Muslim populations, the report showed.

“The populations of the geographic regions are very different from each other,” Haj-Yahya told JNS, noting that the greatest challenges tend to be centered among the Bedouin in the Negev.

‘We have to bring Arabs into the labor market’

The most striking shift among the Arab community is the rate of students enrolled in academic institutions in Israel, which has nearly doubled in the last decade, from 10% in 2010 to 18.3% in the 2020 academic year.

The change is even more pronounced when looking at graduate students—the proportion and number has nearly tripled in the last 10 years, according to the report. Moreover, the proportion of Arabs studying for a PhD rose from 3.9% in 2010 to 7.3% in 2020.

“There is a strong connection between the fact that the government is investing more in the Arab community, specifically providing grants for higher education, and the number of students in Israeli institutions,” said Thabet Abu Rass, co-executive director of the Abraham Initiatives NGO, that provided certain data for the report.

He praised the government for recognizing that “it could not ignore the Arab community.”

“We are around 20% of the total population of Israel, yet we are only contributing 11% to the greater GDP,” Abu Rass explained. “So, we have to bring Arabs into the labor market.”

But, he noted, the labor market in Israel has been dramatically changing, with ever increasing jobs in high-tech and related fields. As such, to effectively integrate Arab Israelis into the market, they need to get educated, he said.

Haj-Yahya said that in some areas, such as within the medical community, there was already integration among Jews and Arabs. But now, she said, the country is starting to see more Arab-Jewish collaboration in retail, commerce and more.

The shift is happening much faster for Arab women than men; women compose two-thirds of the total Arab students in the higher education institutions. At the same time, employment rates for Arab women rose steadily from the mid-2000s. Between 2001 and 2018 the rate almost doubled, climbing from 19.8% to 38.2%, according to the report.

Between 2017 and 2019, Arab employment rates plateaued and even declined slightly. In 2020, following the outbreak of the pandemic in March, employment rates for Arab men dropped sharply to a low of 69.3%.

Haj-Yahya said that this is in part because Arab men are expected to start working from an early age and are less likely to “treat themselves” to a higher education.

The result is Arab men being employed mainly in blue-collar jobs, such as construction, manufacturing, retail and wholesale trade, hospitality and transport industries, according to the report.

“A very small percentage (especially in comparison with Jewish men) work in the information and communication industries, in financial services, in professional, scientific and technical services, and in public administration,” the report noted. “In construction, retail and wholesale, and hospitality—economic sectors that together employ almost half of Arab men—average salaries are lower than the national average. And even in manufacturing, the information and communication sector, and professional, scientific and technical services, in which salaries are higher than the national average, Arab workers earn less.”

Abu Rass said that even as women start to enter high-tech and other more lucrative fields, they are not doing it at the pace that would be expected—and certainly at a lower rate than their haredi equivalents.

The Arab cohort least likely to get educated or work are young Arab men between the ages of 18 and 24, he added. The result, he said, is that they get involved in gangs and are more likely to commit acts of violence and crime.

Crime, poverty on the rise

“If you look at the graphs, there is a direct connection between increased wages and decreased crime and vice versa,” Haj-Yahya said. 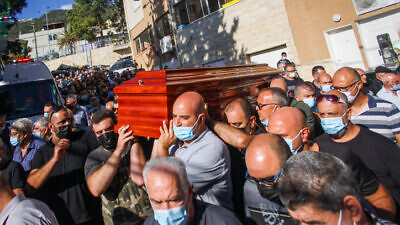 The funeral of Sahar Ismail, the education minister’s aide for Arab society, in the northern Israeli town of Rameh on Aug. 16, 2021. Photo by Flash90.

“Indeed, over the last decade, the number of murder victims in Arab society has almost tripled,” according to the IDI report. “At the same time, the number of Arab citizens wounded in shooting incidents increased more than threefold between 2016 and 2018, from 82 to 301. Since 2000, some 1,574 Arab citizens have been killed, 68 by the police (4.3%) and 1,506 by other Arab citizens.”

Poverty levels have also been on the incline.

The report explains that the National Insurance Institute sets the poverty line in Israel as a relative measure, and accordingly determines the percentage of families falling above or below the line.

Haj-Yahya said the situation, though there is not yet formal data available, is known to have worsened as a result of COVID-19.

“Every kid that lives under the poverty line is not just a statistic,” Haj-Yahya stressed. “These are people who go to sleep hungry, and that is certainly something that decision makers need to know to make reforms. We also need to look at ourselves and think about how we can improve the situation and benefits to improve the quality of life for this community.”

‘Not only in the hospitals’

Abu Rass believes that better times are coming. He said the Arab society is more socially, economically and politically integrated in Israeli society than ever before.

“There is an Arab middle class that is expanding all the time,” he said. “These people are moving to improve their quality of life. They are going to Jewish or mixed cities and now Arabs and Jews can meet not only in hospitals but in public spaces, like malls and restaurants and factories.” 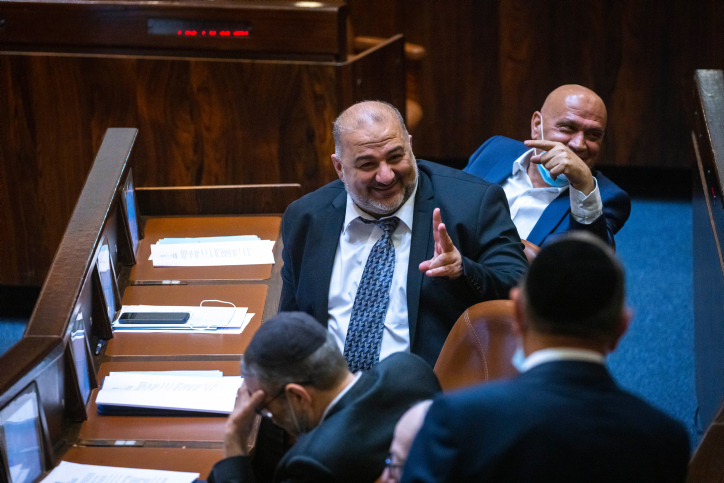 He said that the Ra’am party joining the government gave legitimacy to Arabs in the political arena, something that is “huge for Arabs and putting Arabs in a positive mood. The political integration is enhancing and strengthening the economic and social integration.

“I believe the Arab community is much stronger than it was a decade ago.”