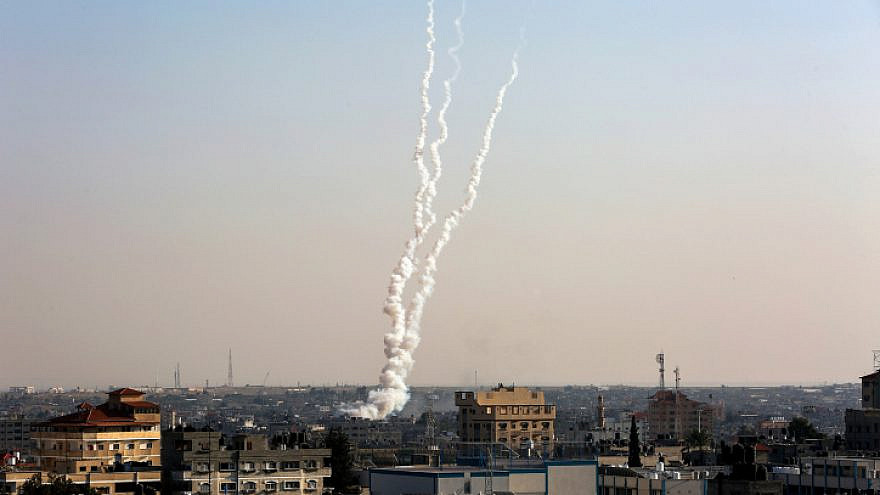 (April 25, 2021 / JNS) Gaza-based terrorists fired multiple projectiles at Israel on Saturday, a day after launching a 36-rocket barrage at the Jewish state in the worst flareup in months.

Rockets fired at Sderot and Kibbutz Nirim in southern Israel triggered sirens, sending residents scrambling for bomb shelters. Israel’s Iron Dome air-defense system intercepted the rocket headed for Sderot, while the second rocket landed in an open area near the security fence, according to the Israeli military. A third projectile failed to cross the border, detonating inside the Gaza Strip.

No casualties or damage were reported.

Overnight on Thursday, the Iron Dome system intercepted six out of the 36 projectiles launched at southern Israel, with the remainder falling in open areas, according to the IDF. No casualties were reported, but several structures and a farming vehicle were damaged by shrapnel.

RAW FOOTAGE: This is the rocket terrorists fired from a civilian area in Gaza toward Israel a short while ago.

Hours after Thursday night’s attack, the Israeli Air Force struck underground infrastructure and rocket launchers in Gaza belonging to Hamas, according to the military.

Hamas has accused Israel of being responsible for the escalation, citing recent unrest in Jerusalem as the trigger, Mako reported over the weekend.

Following a security assessment with the defense minister, public security minister, IDF chief of staff and the head of the Israel Security Agency and the chief of police, Israeli Prime Minister Benjamin Netanyahu said on Saturday that he had ordered that the security establishment “prepare for any scenario.”

He had been briefed on the situation in Jerusalem by the chief of police, he added.

“First of all, we want to ensure law and order. We are maintaining freedom of worship as we do every year, for all residents and for all visitors to Jerusalem,” he said.

Also on Saturday, IDF Chief of General Staff Lt. Gen. Aviv Kochavi postponed his scheduled trip to the United States due to the recent developments, the IDF said in a statement.