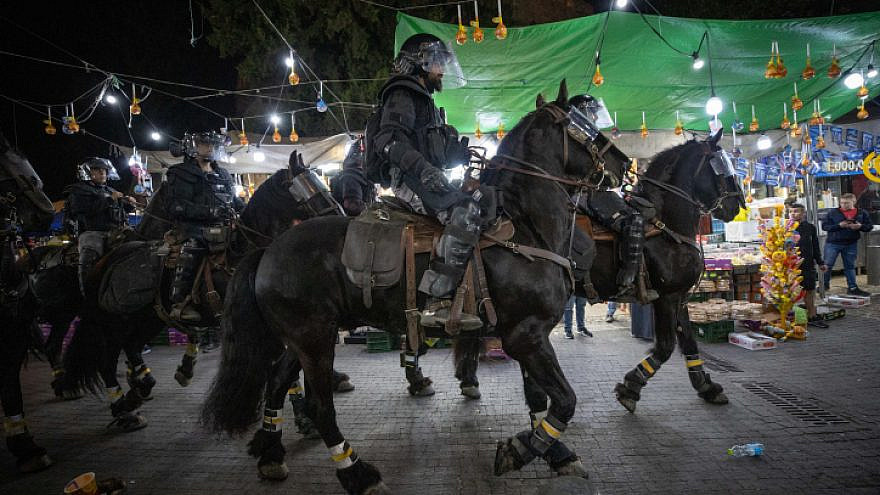 (April 25, 2021 / Israel Hayom) The Israel Police announced on Sunday that it had arrested 17 people suspected of involvement in the violent clashes between Arabs and Jews in Jerusalem that began on April 13, the start of the Muslim holiday of Ramadan, and have been escalating over the past week.

According to Jerusalem District Police Chief Doron Turgeman, the suspects arrested on Saturday night—for “assaulting police officers, throwing rocks, setting off fireworks and hurling firebombs”—join 140 others taken into custody since the beginning of the “unrest,” bringing the total number to 157. Most of those arrested so far have been Muslims, Turgeman told Kan Radio on Sunday morning.

Turgeman also said that 54 of the detainees are being held under suspicion of attacks with a “racist motive.”

According to police, the unrest was sparked in part by a new social-media trend among young Arabs, which involves physically assaulting visibly Orthodox Jews and posting the attacks on TikTok. The first such video shows an Arab teen slapping a yeshivah student on Jerusalem’s light rail. Since last week, similar incidents have been posted to the popular platform.

In one such incident, Eli Rozen, 27, of Jerusalem, was walking his dog when he was set upon by a mob of Palestinians, who beat him severely while filming the attack. Rozen, who believes he narrowly escaped death, described recent events in the city as a “third intifada.”

Meanwhile, hundreds of Palestinians in the Gaza Strip held marches and demonstrations on Saturday in solidarity with the Arabs of eastern Jerusalem facing off with Jews in the capital. Later that night, terrorists in Gaza renewed rocket fire from the night before.

During the course of Friday night and the early hours of Saturday morning, terrorists launched 36 projectiles into southern Israel, resulting in damage to vehicles and buildings but no casualties. The Israel Defense Forces reported that six of those rockets were intercepted by the Iron Dome air-defense system.