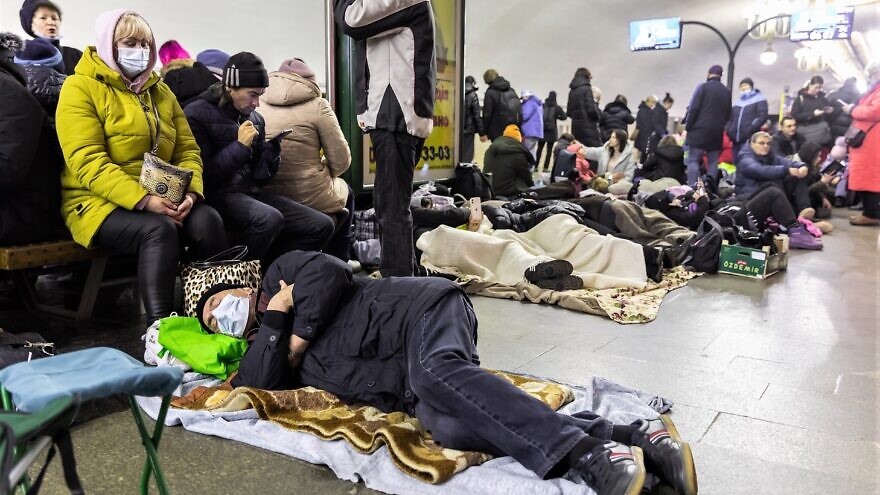 Ukrainians take refuge in a subway station that serves as a shelter for thousands of people during a rocket and bomb attack by Russian forces, February 2022. Credit: Drop of Light/Shutterstock.
Spread the word.
Help JNS grow!
Share now:

(August 24, 2022 / JNS) On the sixth-month anniversary of Russia’s invasion of Ukraine, the Jewish Federations of North America provided an updated summary of how its $73.5 million emergency campaign has helped with relief efforts.

Funding has gone towards emergency operational costs, temporary housing and transportation, security, humanitarian support and trauma relief; and in Israel, aliyah and absorption. The relief aid has been directed to some 50 nongovernmental organizations providing humanitarian aid and relief to Ukrainian refugees in Ukraine and neighboring countries, as well as to new immigrants in Israel.

The funds raised by JFNA ensured that:

“Jewish Federations’ collective response to this crisis has been tremendous, as is demonstrated by the dozens of NGOs we have supported and the number of lives on the ground we have impacted,” said Eric Fingerhut, president and CEO of Jewish Federations of North America. “The scale of devastation is massive, and though these needs will keep growing, our system will continue to respond to these needs, to alleviate pain and suffering, and to provide essential care and support to Ukrainian refugees.”

A total of $61 million has already been distributed to Jewish Federations’ core partners: the Jewish Agency for Israel, the American Jewish Joint Distribution Committee (JDC) and World ORT, as well as dozens of other organizations providing critical rescue and relief to Ukrainian refugees of all backgrounds.

In June, Jewish Federations estimated that their partner organizations’ total needs for Ukraine efforts will amount to $100 million in 2022.

To continue to meet such demands on the ground, JFNA announced the appointment of Cleveland resident J. David Heller, co-founder and CEO of the NRP Group, to chair the next phase of its emergency campaign.

In addition to providing humanitarian aid for refugees, JFNA has advocated for expanded refugee rights and resettlement in the United States, and provide grants for support of displaced Ukrainians. Last month, it launched a $1 million Ukrainian Resettlement Grant Initiative with matching funds from the Shapiro Foundation and the Combined Jewish Philanthropies, Boston’s Jewish Federation. Jewish Federations have also placed 90 Russian-speaking Jews in volunteer placements to support Ukrainian refugees in Poland and Hungary.