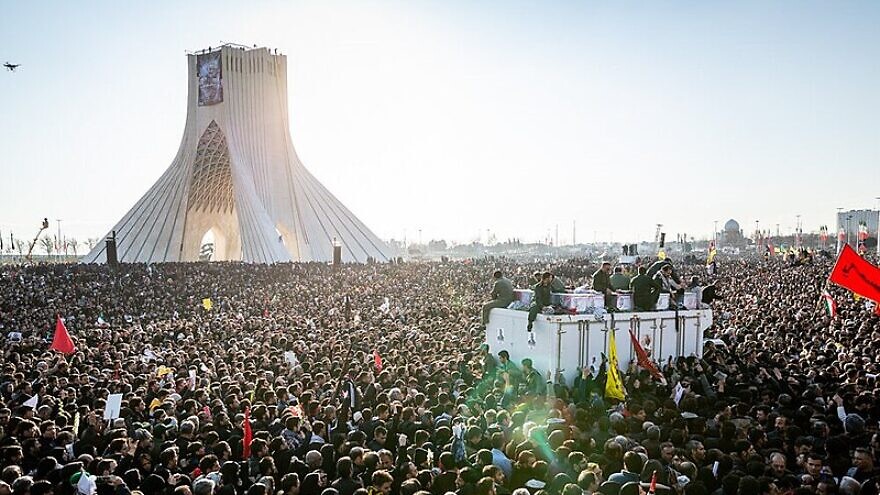 (January 20, 2020 / JNS) In assassinating Iranian commander Qassem Soleimani, head of the Quds Force of the Islamic Revolutionary Guard Corps (IRGC), in Iraq on Jan. 3, the United States took out the head of the militant wing of the world’s largest state sponsor of terrorism. Soleimani was responsible for the deaths of hundreds if not thousands of Americans, and for Iran’s ongoing regional destabilization campaigns in Iraq, Syria, Lebanon, Yemen and Gaza. According to intelligence reports, Soleimani was planning additional attacks on U.S. targets.

However, Soleimani’s killing appears to be reverberating not only around the world but inside Iran as well, where the dictatorial Islamic regime, already under the tremendous financial burden of a crushing American-led international sanctions regime, has recently been facing mounting internal protests.

According to Harold Rhode, a longtime former adviser on Islamic affairs within the U.S. Defense Department’s Office of Net Assessment, who was in Iran during the early months of the 1979 Islamic Revolution, the ongoing protests in Iran may be a signal that “the government is losing control over the people.”

As an example, Rhode cited a video that went viral last week showing Iranians carefully walking around American and Israeli flags painted onto a street—a silent and uniquely Iranian cultural protest against an Islamic regime that encourages the mass chanting of “death to America” and “death to Israel.”

“Many people in Iran no longer fear their government,” Rhode told JNS. “Had they still feared the government, they would have meekly walked over the flags.”

Soleimani’s targeted killing by the United States appears to have accelerated this trend, said Rhode.

While more than a million Iranians reportedly attended Soleimani’s funeral in Tehran, Rhode continued, in the weeks since his death the anti-regime protests have been gaining momentum. Protesters across the country have been recorded chanting “Soleimani is a murderer … his supreme leader is also a murderer,” added Rhode.

By killing Soleimani, said Rhode, the United States had struck a blow to the prestige of the IRGC.

“Soleimani is gone, and there seems to be chaos at all levels of the IRGC,” said Rhode. “That is a recipe for disaster for the regime which relies on the IRGC to stay in power.”

‘At each other’s throats’

According to Banafsheh Zand, a high-profile Iranian political dissident living in the United States, the strike against Soleimani—one of the brutal regime’s most important leaders—has become a trigger for protests “because it gives the Iranian people inside the country hope.”

Zand explained that in addition to the strike itself and the resulting protests, international responses to events inside Iran by world leaders and the media have historically played an influential role. Former President Jimmy Carter’s withdrawal of support for Iran’s monarch, Shah Mohammad Reza Pahlavi, in 1979 was a contributing factor in his overthrow, while President Barack Obama’s expression of support for the regime and against the protesters during the 2009 “Green Movement” helped solidify the rule of Supreme Leader Ali Khamenei’s regime.

“The media plays an important role and if the facts are reported accurately, it gives strength to the protesters inside [Iran],” said Zand.

“I was 17 years old when the street demonstrations began [during the revolution], and I observed how The New York Times and BBC exaggerated the uprising” that led to the downfall of the shah, who was much more moderate and aligned with Western values in comparison to the current Islamic dictatorship, Zand told JNS.

Zand believes that the current external pressure on the regime and in support of protesters may ultimately lead to a change of momentum inside the country. The downing by regime forces last week of a commercial airliner, which Tehran claims was accidental, has spurred additional protests, with Western leaders carefully watching the regime’s response.

U.S. President Donald Trump posted a message on Twitter cautioning the Iranian regime not to use violence against demonstrators.

And demonstrating against the Iranian regime can be dangerous indeed; during a wave of protests just prior to the Soleimani assassination, more than 1,500 Iranians were murdered in the streets by Iranian forces.

According to Zand, however, Iranians will not be deterred by the threat of violence. There is a Persian expression, she told JNS: “Death is once and crying is once.”

“It means it does not matter if you go and fight or you die a slow, painful death,” said Zand. “People are frustrated and say, ‘The heck with it,’ and are ready to accept the consequences.”

This applies not only to Iranian civilians, she said, but also to members of the country’s armed forces, including the IRGC itself.

She cited a recent report that a network of informants in Damascus and Baghdad collaborated with the U.S. military’s strike on Soleimani.

“Soleimani was betrayed by fellow IRGC members. They are killing each other,” said Zand. “Also look at the clerical leaders, the mullahs—they are at each other’s throats as well.”

Both Zand and Rhode see the Soleimani strike as a potential turning point for Iran, but both insist that the Iranian protesters will need unwavering support from the Trump administration to continue building momentum. Rhode cautioned that the regime will try to stay in power at all costs and will not simply bow to international economic and diplomatic pressure, however fierce.

The regime will “continue to find ways to probe the United States for signs of weakness or indecisiveness,” said Rhode. “If they detect weakness, Iran will pounce.”

He added that Trump’s actions may play a critical role in determining the future of the regime.

“It is important that the Trump administration stay strong and not show Iran any weakness and respond to any aggression with overwhelming strength,” said Rhode, while noting that crippling international sanctions administered by the U.S. are taking a severe toll on the country as well as the stability of the Islamic regime.

“With all that is going on,” he said, “it is hard to imagine how much longer the regime could survive.”