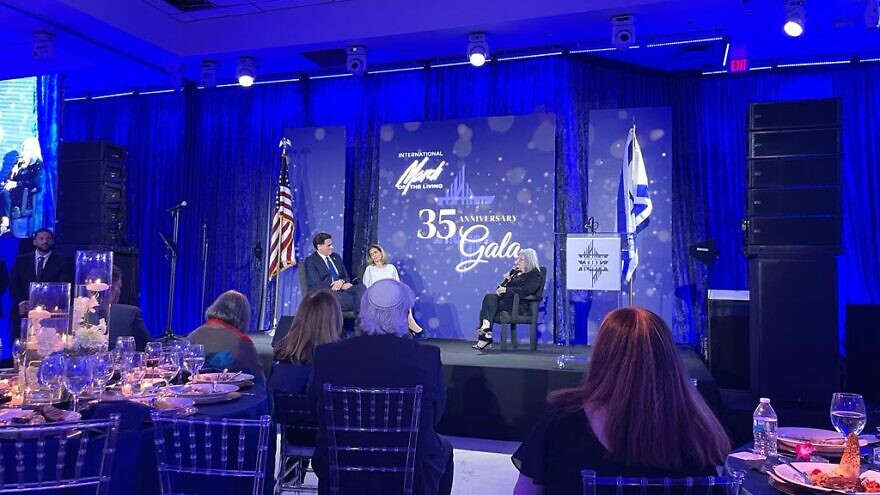 Chairman of the March Shmuel Rosenman paid a special tribute to Lau, who has participated in some capacity in the annual trip to Poland and Israel to study the history of the Holocaust since its inception in 1988.

“For me, the essence of the march is in its name. The march of a people whose destiny it is to live,” Lau said in a video message to the gathering.

Lau, sent to a Nazi slave labor camp at age 7, survived Buchenwald, made aliyah in 1945 at age 8  and later became chairman of Yad Vashem.

The current and immediate past U.S. ambassadors to Israel, Tom Nides and David Friedman, will lead the 2023 International March of the Living in what the organization described as a bipartisan commitment to combating Jew-hatred.

“As divided as we are as a country, I think we are all of one mind in the battle against antisemitism. So, I sat down with Tom Nides and I said, ‘We don’t agree on much of anything.’ So, how about he, a left-wing Democrat, and me, a right-wing Republican, lead the March together? And, to his credit, he said, ‘What a great idea.’ We will say not in words but in deeds that we are fighting against antisemitism,” Friedman said at the event on Tuesday.

The Dermers were presented with a silver-plated shofar to mark the work they do on behalf of the March.

“Ron and Rhoda are two of the most ardent supporters of the work we do. They have been a shining light for the Jewish people since making aliyah, and the State of Israel, the Jewish people, and the entire world benefit daily from their insights and dedication,” said Phyllis Greenberg Heideman, president of the March, who interviewed the Dermers on stage.

During the exchange, Ron Dermer recounted a development when he and his wife attended the March in 2017.

“I remember the surreal occurrence of being on a top-secret phone call between the Israeli and U.S. national security advisors about concurrent bombing missions in Syria following [President] Bashar Assad’s use of chemical weapons, and this took place immediately outside the gas chamber at the Majdanek [German death camp],” said Dermer.

“The Holocaust took everything away from the Jewish people: their dignity and their lives. But it is very important not to take the Holocaust away from the Jews, to make it just another genocide,” added Dermer. “What made the Holocaust unique was not just the scale: 6 million Jews killed. What is unique is that all the Jews were targeted. It was systematic. It was planned and executed. It was also an end to itself. It is rooted in deep antisemitism,” he said.

“To turn the Holocaust into another chapter of man versus man would be a major mistake. It is not. It is humanity’s worst chapter of man against Jews. The lesson of the Holocaust is that the Jewish people were defenseless, the Jewish people need power. The problem of having power is that you are imperfect. When you are a victim, it is easier to be perfect. But I would rather be imperfect and sovereign,” said Dermer.

He proceeded to note that this sovereignty, manifested in the form of the Jewish State of Israel, has positioned the Jewish people to confront, less than 80 years after the Holocaust, another regime that is threatening to eradicate it.

“Making sure that the evil regime in Iran does not achieve its goal of acquiring nuclear weapons is the new Israeli government’s first priority,” Dermer said. “The second is expanding the circle of peace brought about by the Abraham Accords,” the Trump administration-brokered agreements that normalized Jerusalem’s relations with four Arab states. “Third is to significantly strengthen the bilateral ties we have with the United States. Israel will become the U.S.’s most important ally of the 21st century.

“I am confident that under Prime Minister Benjamin Netanyahu’s leadership, we’ll be able to achieve these goals,” Dermer said.

When asked about the personal sacrifice a family with five children needs to make by having their husband and father serve in a senior public capacity, Rhoda said, “Every Israeli knows that when the State of Israel comes calling, you can’t say you want to stay home. Ron is the right man in the right place at the right time.

“With one son in the Israeli military and two others about to enlist, I sleep better knowing that Prime Minister Netanyahu is there, and that Ron is standing by his side,” she said.

The March will take place this year on April 18, when participants walk down the same 3-kilometer path leading from Auschwitz to Birkenau on Holocaust Remembrance Day—Yom Hashoah—as a tribute to the victims of the Nazi genocide.

More than 300,000 people from over 150 communities across 50-plus countries have participated in the March, along with some 300 Holocaust survivors.