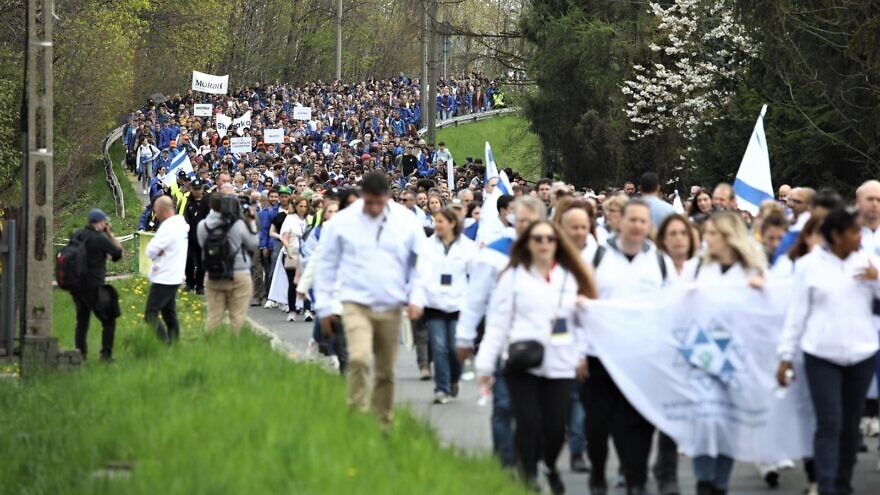 Participants on the annual 1.9-mile March of the Living at the Auschwitz-Birkenau concentration and extermination camp in Poland commemorate the victims of the Holocaust, April 28, 2022. Photo by Aloni Mor/MOTL.
Spread the word.
Help JNS grow!
Share now:

(November 14, 2022 / JNS) The current and immediate past U.S. ambassadors to Israel, Tom Nides and David Friedman, will lead the 2023 International March of the Living in what the organization described as a bipartisan commitment to combating antisemitism.

Since 1988, March of the Living has brought students, Holocaust survivors, educators and leaders from around the world to Poland to study the history of the Holocaust, including participants’ march from Auschwitz to Birkenau on Yom HaShoah (Holocaust Remembrance Day).

Given that Friedman was part of Donald Trump’s Republican presidential administration and Nides serves in President Joe Biden’s current Democratic administration, their co-leadership of this year’s trip “highlights America’s bipartisan solidarity with Israel and its commitment to combat antisemitism in all its forms, a commitment which transcends politics and partisan agendas,” International March of the Living stated.

Former ambassador Friedman said the march will demonstrate “in the strongest terms that antisemitism will not be tolerated in any sector of America.”

“Tom and I have very different political views, but we fully agree that antisemitism is a vile scourge which we must defeat,” he said in a statement.