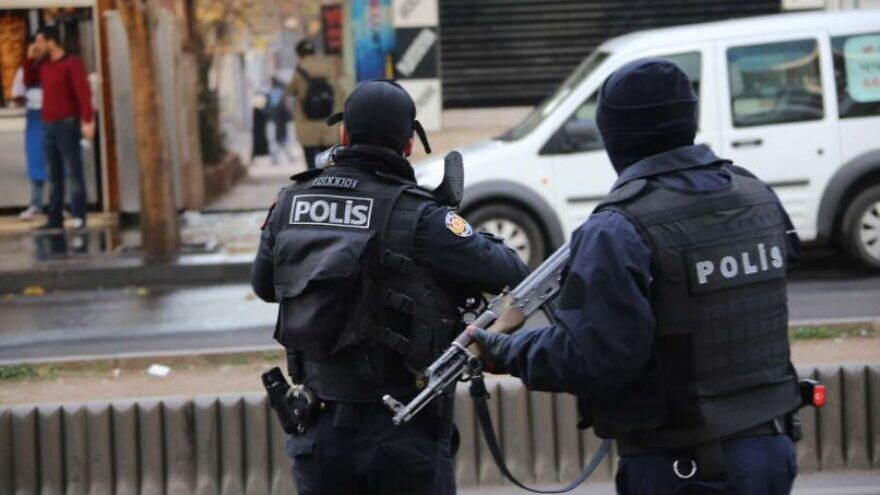 (December 14, 2022 / JNS) Turkish law enforcement and intelligence authorities have detained 44 people on suspicion of “spying on Palestinians,” and placed seven under full arrest, on suspicion of passing on information to Israel’s Mossad intelligence agency, the Daily Sabah pro-government Turkish daily reported on Wednesday.

Hamas maintains an active headquarters on Turkish soil, which it uses to orchestrate and fund terrorist activity in Judea and Samaria.

According to the Turkish report, an operation conducted jointly by Istanbul police and the National Intelligence Organization (known by its Turkish acronym, MIT) focused on Istanbul-based “consulting firms” that provided private investigation services to their clients while allegedly maintaining relationships with Israeli intelligence.

The report claimed that Mossad hired suspects to conduct surveillance on Palestinians and their nongovernmental organizations (NGOs) in Turkey, while also allegedly assisting Mossad in launching online campaigns against the Palestinians in question. Turkish authorities are searching for 13 additional suspects.

A report published in on Dec. 30, 2021, by the Jerusalem Center for Public Affairs said Hamas’s headquarters in Istanbul has directed hundreds of terrorist attacks against Israelis and laundered millions of dollars.

The report noted that “a decade has passed since the official opening of Hamas’s offices in Istanbul, and Turkey is courting Israel anew. Turkey collaborates with terror organizations on both the ideological and operational levels. Terrorists working on Turkish soil establish infrastructures and plan terror attacks against Israel.”

On April 27, Israel Hayom said that amid Ankara’s efforts to repair relations with Israel, Hamas members and associates were deported from Turkey.

“Dozens of people identified with Hamas, in various circles, have been deported [from Turkey],” one Palestinian official told Israel Hayom.

“Turkey asked them to leave, and it actually happened in the last few months. Some of the people with ties to Hamas’s military wing have been deported,” the official said.