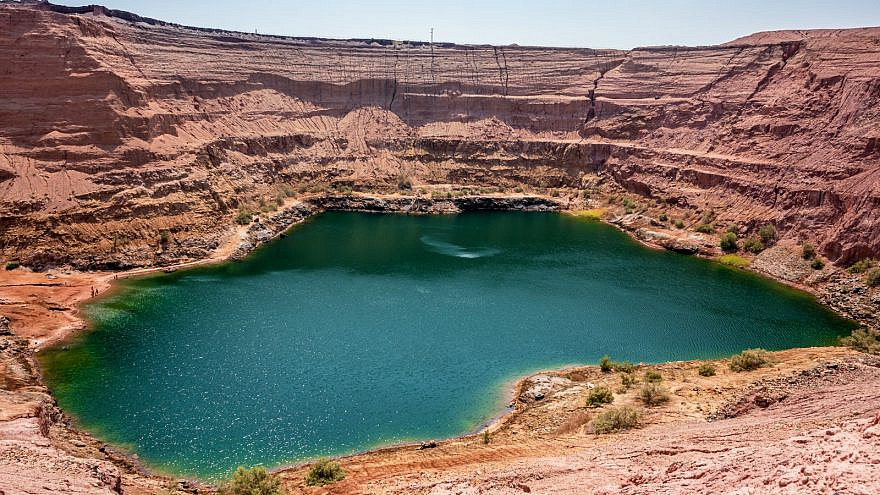 The hidden lake at Timna in the desert was formed when copper quarries were flooded. Credit: Gur Tatiana via Shutterstock.com.
Republish this article
1311 WORDS
Spread the word.
Help JNS grow!
Share now:

(March 11, 2021 / Israel21C) Israel being a pretty small country, you’d think that every last inch of it would be well-known and well-covered. Yet that’s far from being the case. Avid or armchair travelers can relish in reaching endless little locations where they can bask in the glorious silence, as well as in the glow of boasting about it to friends less in the know.

So that you, too, will be able to sound all adventurous and mysterious next time Israel comes up, we’ve gathered 12 secluded spots up and down the country. Because really, who wants to hear about overflowing markets anymore? 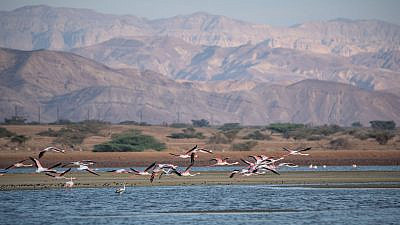 A flock of flamingos rests at the evaporation ponds near Eilat. Photo by Mila Aviv/Flash90.

Fancy seeing a flamingo in the desert? Look no further than the evaporation ponds in Evrona near Eilat, which a group of previously migrating flamingos has decided to call home. The birds used to fly over the area on their way to Africa, but more than 20 years ago made their pit spot a permanent one, thanks to the readily available food at the site. The pools are located right on the border with Jordan, meaning that the flamingos simultaneously receive audiences from both countries, whose people, in turn, can also wave hello to one another. Coexistence, flamingo-style. 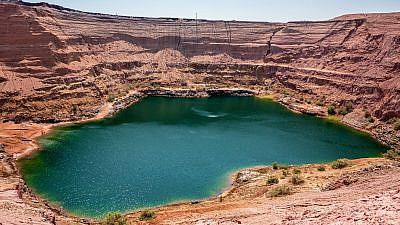 The hidden lake at Timna in the desert was formed when copper quarries were flooded. Credit: Gur Tatiana via Shutterstock.com.

The hidden lake at Timna is perhaps one of the most striking sights in Israel—a bright turquoise body of water surrounded by red mountains in the middle of the desert. Located a short ride from Eilat, the lake isn’t a natural one but was formed when the copper quarries at the site were flooded. Since the lake is situated among mines, it’s a little off the beaten track and isn’t the easiest place to get to. And yet, keen travelers are making their way there for a swim in the salty waters and even, as has become somewhat popular lately, for diving in the unusual location. 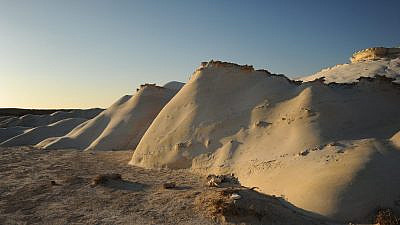 A view of the chalkstone park of Hamukei Nitzana near the border with Egypt. Photo by Mendy Hechtman/Flash 90.

Hamukei Nitzana (Nitzana Curves) is a natural park full of large, bright-white chalk rocks that form in curvy, smooth patterns reminiscent of, well, curves. Its location right on Israel’s southern border with Egypt means that it’s not flooded with tourists even in the most COVID-free of times, enabling enterprising visitors to walk around and enjoy the moon-like setting in peace and quiet. It’s also a great destination for a moonlight hike, when the chalky stones shine bright. 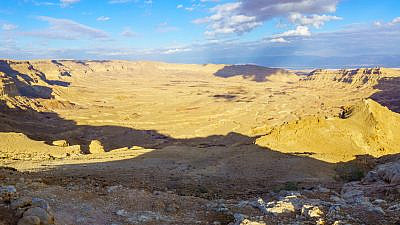 The Little Crater in the Negev Desert. Photo by Ester Inbar/Wikimedia Commons.

Despite its name, the Little Crater is quite a large secret location, coming in at five miles long, almost four miles wide and 1,300 feet deep. The crater is a rare geological phenomenon and far less famous than its cousins, the Ramon Crater and the Big Crater. It was only deemed a nature reserve in 2019, following a decades-long struggle with Israel’s defense establishment, which opposed the move because some of the reserve belongs to the Negev Nuclear Research Center. It is home to unique geological forms, colorful rocks and endangered wildlife, and is a wonderful site for a desert hike. 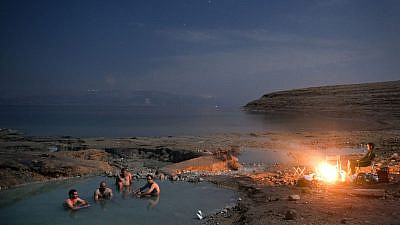 People enjoying the water of the Dead Sea. Photo by Noam Revkin Fenton/Flash 90.

The Dead Sea is one of Israel’s best-known travel destinations, but it too is full of surprises, including deliciously hot springs—dotted along the shoreline where the Kedem Stream meets the Dead Sea—some of them large enough to fit a family or a few friends, and some of them just big enough to seat romantic couples. Getting there isn’t easy and requires going off-road and avoiding dangerous sinkholes, but that doesn’t seem to deter the brave few who venture out there, especially in the winter season. 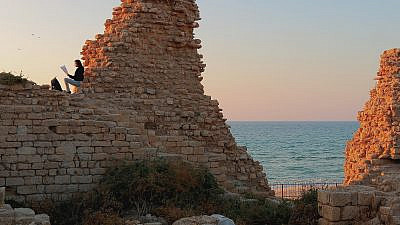 The ruins of the ancient fortress at Ashdod Yam. Photo by Michael Stein via Shutterstock.com.

While the beaches in Tel Aviv are perhaps the most famous, the coastline in Israel in fact runs down a substantial part of the country. And the beach in Ashdod, half an hour’s drive south of Tel Aviv, even boasts its very own fortress.

First built by Arab rulers in the seventh century, the fortress was used in later centuries to unsuccessfully defend the Holy Land from the Crusaders, who, after taking over the area, also took ownership of the stronghold. Today, the fortress remains strike a magnificent picture against an otherwise empty strip of sand, even leading couples to choose the venue to tie the knot in small, corona-era wedding ceremonies. 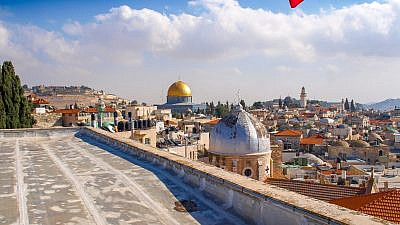 The rooftop of the Austrian Hospice in Jerusalem’s Old City. Photo by Thomas Marchhart via Shutterstock.com.

The Old City of Jerusalem has many rooftops from which to take in the breathtaking views, with one of the best—and relatively accessible—ones belonging to the Austrian Hospice. Opened in 1863, the building first served as the Austrian Catholic Church’s pilgrim hostel before turning into a military convalescent home during World War I, an internment camp during World War II, a hospital and again a present-day hostel with its very own Viennese coffee shop.

While the coffee shop is famous for its hot chocolate and apple strudel, those looking for a different experience would do well to saunter up the staircase to the roof, from where they can comfortably view the very heart of the Old City. 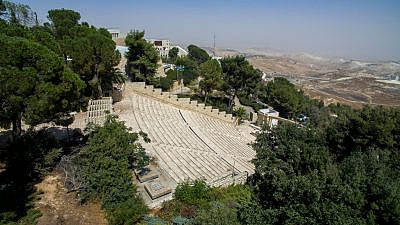 The stone amphitheater at the Hebrew University in Jerusalem. Photo by Movraw via Shutterstock.com.

The open-air amphitheater located at the edge of the Hebrew University of Jerusalem’s Mount Scopus campus is one of the university’s best-kept secrets, alongside its botanical gardens. The amphitheater originates in 1925, when a temporary wooden structure was laid down at the site ahead of the university’s opening ceremony, which included grandees, such as the British Lord Balfour and General Allenby. The current stone structure was built 10 years later and withstood historic events, such as Israel’s War of Independence and the Six-Day War. Today, visitors who make the endless trek all the way to the edge of the campus are rewarded with beautiful desert views stretching into Jordan. 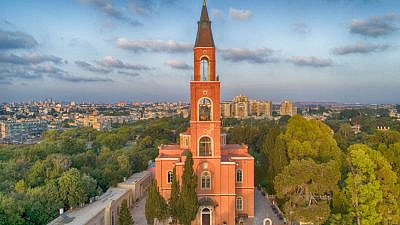 The bright pink Russian Orthodox Saint Peter’s Church towering over treetops makes an unusual addition to an otherwise rather nondescript residential area of southern Tel Aviv. Built in the 19th century, the complex includes both a church and a monastery and is open to the public for only a short time each week, very much adding to its secretive status. Enjoyed mostly by locals, the complex and surrounding park are a breath of fresh air in the metropolitan area. 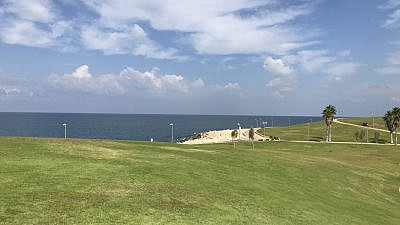 Located at the southern, less well-known side of Jaffa, the Midron Slopes beach, rolling down from the Ajami neighborhood to the Mediterranean Sea, boasts expansive grass lawns, bike paths, walking lanes and strips of sand, but somehow have yet to attract the crowds found elsewhere in Jaffa and Tel Aviv. The beach is best enjoyed early on Friday evenings when families get together for dinner, couples go out on romantic dates and kids whizz around, all in a uniquely pleasant, local atmosphere. 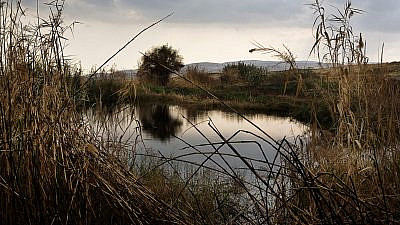 Ein Sukkot in the Jordan Valley. Photo by Matanya Tausig/Flash 90.

Ein Sukkot is a wonderfully large spring surrounded by reeds, giving the whole place a very private and secluded vibe. The spring is located off-road in between a couple of settlements, making getting there a bit of a challenge, but is a firm favorite among travelers who absolutely cannot bear the thought of sharing an afternoon with the masses. Secret indeed. 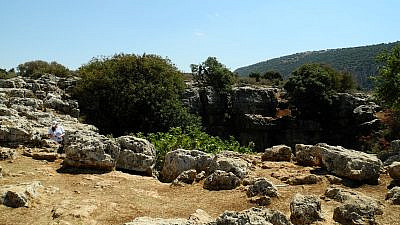 The entrance to the Alma Cave in the northern Galilee. Photo by Dmitry Babin/Wikimedia Commons.

Alma Cave in the northern Galilee region is everything you could wish for in a cave: long, dark, cold and full of bats. It has a few legends surrounding it, such as the one claiming that Jews returned to the land of Israel from their Babylonian exile through it (because it’s so long).

Fast-forward a few thousand years, and the cave is equipped with pegs and light reflectors to ease the way in for visitors, who should still come in long-sleeved clothes and anti-slip shoes. The cave is currently closed to protect its bat population, but once it reopens, it’s well worth the descent.