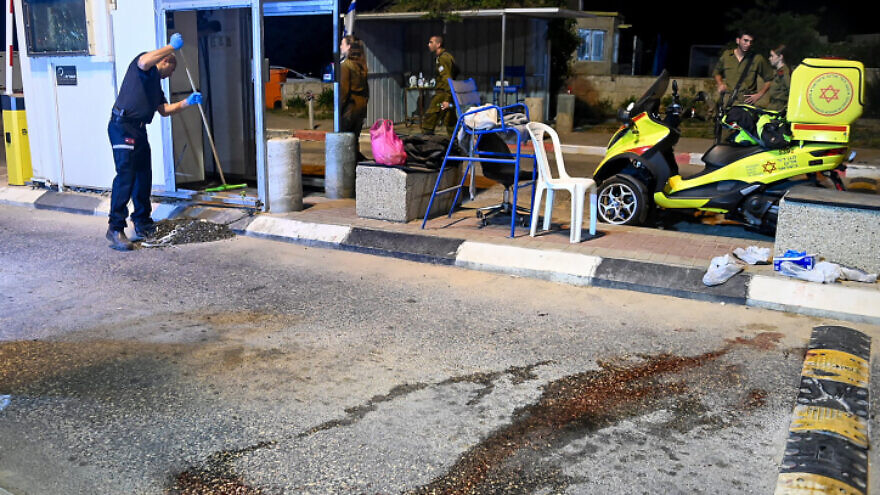 Israeli security and rescue personnel at the scene of a shooting attack at the entrance to Ariel, in Judea and Samaria, on April 30, 2022. Photo by Flash90.
Spread the word.
Help JNS grow!
Share now:

(May 1, 2022 / JNS) Israeli security forces arrested two Palestinians on Saturday in connection with the murder of an Israeli civilian security guard outside Ariel the night before, according to the Israeli military.

The suspects, identified by Israeli media as Yahyah Maree, 19, and Yousef A’ssi, 20, were arrested in their homes in the town of Qarawat Bani Hassan, near Ariel, the Israel Defense Forces said in a statement. Two Carlo-type improvised submachine guns were also seized, according to the military.

The guard, named by Hebrew media as Vyacheslav Golev, 23, of Beit Shemesh, had been stationed at the entrance to Ariel together with his fiancée, Victoria Fligelman of Ashkelon.

Two gunmen arrived at the entrance to Ariel in a blue Suzuki with Israeli license plates that belonged to another vehicle, Israeli media reported. The terrorists opened fire on the guards’ booth from their vehicle, before one of them exited the vehicle and fired at the booth from close range. Golev shielded Fligelman with his body, according to Ynet. Dolev died of his wounds, but Fligelman was unharmed. 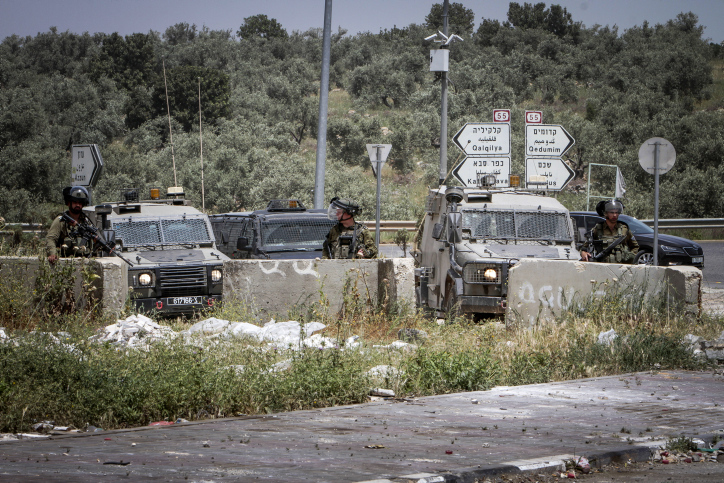 Israeli security forces block the entrance to Salfit in Judea and Samaria on April 30, 2022, during searches for the terrorists who carried out the deadly attack at the entrance to Ariel the night before. Photo by Nasser Ishtayeh/Flash90.

Preliminary investigations have found no evidence that the gunmen were sent by any terror groups, but one had ties to Hamas, according to the report. Both suspects were barred from entering Israel, and one has served time in an Israeli prison. Several of the suspects’ relatives were also arrested, on suspicion of aiding them in carrying out the attack, reported Ynet.

Golev, who is survived by his parents and seven siblings, only recently moved to Ariel together with Fligelman, according to the report. The two became engaged just weeks before the attack.

Fligelman’s father told Ynet that her daughter, who is being treated at Barzilai Medical Center in Ashkelon, had suffered “great trauma.”

Israeli Prime Minister Naftali Bennett said on Saturday, “There is no terrorist whom we will not reach and settle accounts with.”

“I would like to convey my condolences to the family of the security guard who was murdered as he protected his colleague from the terrorists with his body last night in Ariel,” he said.

“Our war with terrorism is lengthy. Together we will win,” he added.