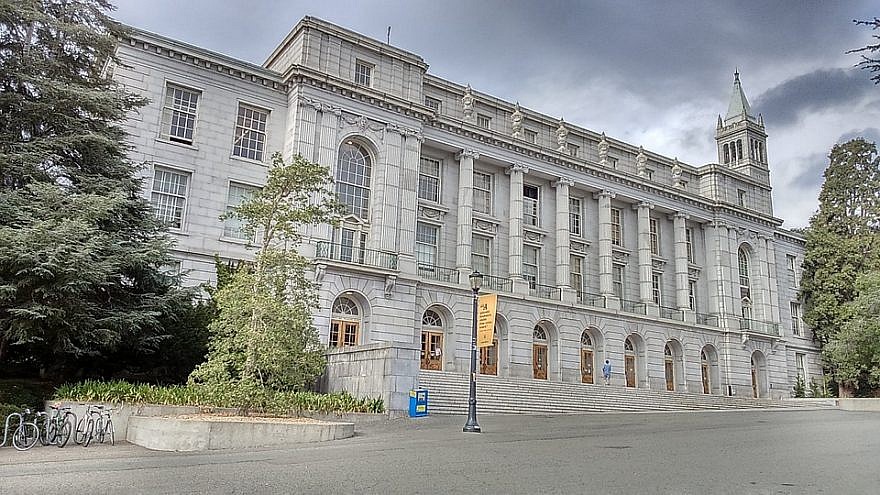 (February 19, 2020 / JNS) Chancellor Carol Christ of the University of California, Berkeley, said on Tuesday that she was “deeply troubled” by the actions of pro-Palestinian students who caused a student government meeting on Feb. 3 to erupt into chaos, delaying a vote on a measure to censure a Bears for Palestine display in December featuring convicted Palestinian terrorists Rasmieh Odeh, Fatima Bernawi and Leila Khaled.

The separate, though similar, letters that Christ sent to those for and against the resolution, which was rejected last week, appears to demonstrate the chancellor walking back her reaction on Feb. 5, when she said she was not “interested” in blaming pro-Palestinian students for allegedly verbally and physically intimidating pro-Israel students.

In both letters, Christ said that each side of the issue is being heard.

“There is no greater priority than our commitment to foster and sustain a campus community where everyone feels safe, respected and welcome at all times, in all places; where everyone feels a true sense of belonging,” she wrote. “Even as we in the administration reflect on our own ability to improve the quality of discourse, I can only hope that all involved will do the same.”

Christ noted that while “students have a constitutionally protected right to display the posters in question, using a campus location to honor those who killed unarmed Jewish civilians and/or bombed, or planned to bomb places frequented by unarmed Jewish civilians, is an affront to our Principles of Community. So, too, were the words of a speaker at the latest ASUC meeting who proclaimed a desire to ‘eliminate Palestinians from the world.’ ”

“I understand why these kinds of actions and words have created fear and safety concerns among our Palestinian and Muslim communities, and I am telling you—our Israeli students, as well as Jewish students from the United States and elsewhere—the very same thing regarding your understandable fears and concerns about the poster’s implications,” she continued. “I am reaffirming to all involved that threats or acts of violence and harassment are unacceptable as per our Student Code of Conduct and/or the law.”

Christ also remarked that while the university “must respect” the student government’s “legal independence and autonomy, I want to explore offering more resources to help the ASUC plan for ASUC meetings that involve controversial issues and deeply divided protagonists,” and that in the aftermath of the Feb. 3 chaos and the resolution vote, the university’s department of student affairs, along with student government executives, will “be exploring opportunities for training in effective strategies and tactics for de-escalation, effective meeting management, and fostering a safe and secure environment.”

Christ encouraged both sides to report incidents of harassment to campus police (UCPD), and that those affected by the incident will have the chance to meet with the head of UCPD, Margo Bennett.

In both letters, Christ pledged to continue to “speak out loudly and clearly in condemnation of anti-Semitism, Islamophobia, anti-blackness, racism, and other hateful ideologies and perspectives that target people based on their identity, origins or beliefs.”

She also mentioned that the university is “in the process of assessing the best, most effective way to continue providing educational information about anti-Semitism in the Golden Bear Orientation for all incoming students, while expanding that essential training to include Islamophobia, anti-blackness, and other ideologies that are antithetical to our Principles of Community.”

In the letter to those who opposed the resolution, Christ said she asked the school’s vice chancellor for equity and inclusion “to seek your specific ideas and proposals for the establishment, charter and membership of a Chancellor’s Committee on Palestinian & Muslim Student Life” and “to explore the possibility of re-establishing the Chancellor’s Council on Students of Color and Multi-Cultural Engagement.”

In both letters, Christ wrote that she was told about “websites that attack and personally identify individual students.”

A university spokesperson told JNS that Christ was generalizing about such websites, and that “if she had a specific website in mind, she would have said so.”