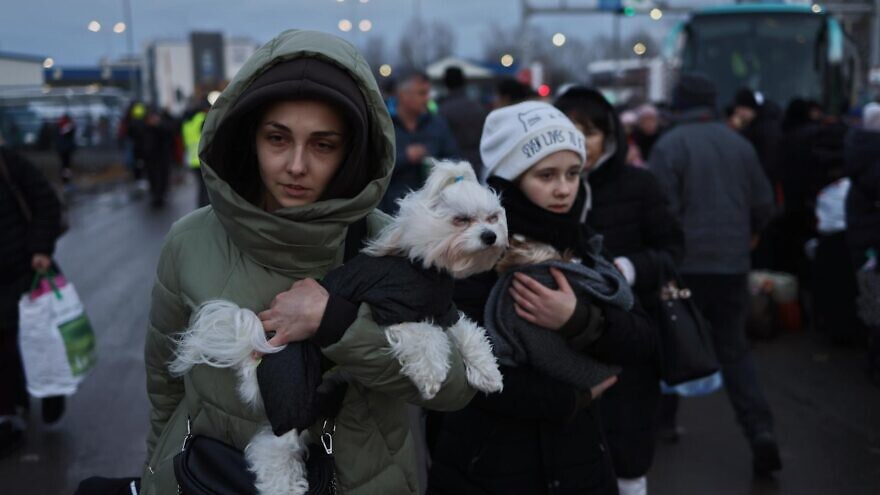 (January 13, 2023 / JNS) Ukraine’s Jewish refugees fleeing the Russian invasion have scattered around the world, including the U.S., Israel, Poland, Germany and Spain.

Perhaps no community, though, was as well-suited to integrate them as Vienna, Austria, which was already home to a substantial number of Russian-speaking Jews before the invasion of Ukraine last February.

“It’s been a real mission to create here in Vienna a Russian-speaking community,  and step by step we started to build this,” Kolomoitsev told JNS. “But since the 24th of February (the date of the Russian invasion), everything has changed. A lot of people already knew that we have this community and called us for help.”

It started with Sluzki locating 10-15 apartments for incoming refugees before he turned to Kolomoitsev and said “We need to do something. It’s our mission. We need to help people when they call on us.”

In addition to transporting refugees from the Polish and Moldovan borders to Vienna, JRCV is able to provide 220 furnished apartments, housing 1,200 refugees, together with food allotments, holiday meals and youth activities to accommodate these refugees from across the religious, and non-religious, Jewish spectrum. A staff of six volunteers works on apartment maintenance, social work, psychological assistance, food supervision and halacha (Jewish law).

JRCV has facilitated the teaching of German to refugee children in its Russian-speaking schools, which are staffed in part by Ukrainian teachers who fled the invasion. It has also raised significant funds to supplement the modest allowances provided to host families, who have opened the doors of their own homes, to accommodate refugees’ basic needs.

The issue is all too personal for Tsigutkin, who, at the age of 17, left Mariupol in the Soviet Union with his family. Traveling through Bratislava and other points, Tsigutkin said his first stop in the free world was in Vienna, in 1979.

“I knew that I was Jewish from the stories of my mother’s father, but I didn’t know much about it. So, I learned a little bit about Judaism in Vienna, but not much. There were very few resources at that time available,” he said.

With Vienna serving as a transition, Tsigutkin would spend three months in Italy before arriving in the U.S., enrolling in Yeshiva University and “learning about who I am and what being a Jew means.”

His aunt and uncle, though, stayed behind in Mariupol, and were still living there while the city came under catastrophic Russian assault in the opening days of the invasion last year. Tsigutkin had not seen his aunt and uncle since he left decades ago.

Leaving behind a good life, they were able to escape the destruction, but departed with virtually nothing but psychological trauma. Tsigutkin, who has long been financially supportive of the Mariupol Jewish community, said it was not comparable to the exodus of Soviet-era Jews.

“These are the people who already had established Jewish life, with Jewish schools, yeshivas, beautiful Shabbats, just like we have in the United States or in Israel. And then, almost overnight, the whole thing came to an end,” he lamented.

Sluzki stepped in to assist Tsigutkin’s family, offering them shelter, something for which Tsigutkin said he holds enormous gratitude. He ended up attending the opening of the new community center in Vienna, bringing along his parents—who are in their 80’s—to meet his uncle in an emotional family reunion.

“It’s just remarkable what can be done by fellow Jews. And I’m very proud to be partners with the Jewish community in Vienna,” Tsigutkin said. “It’s not just a one-time thing. This needs to be sustained. And we also anticipate more Jews will be coming to Vienna from Russia.”