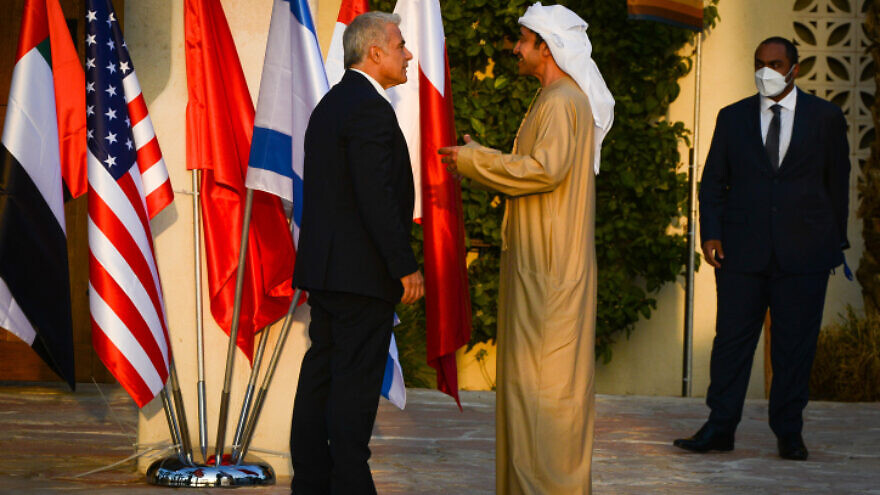 Jerusalem was in a festive mood this week as United Arab Emirates Foreign Minister Sheikh Abdullah bin Zayed Al Nahyan arrived to mark the second anniversary of the Abraham Accords.

While State Department spokesman Ned Price has in the past refused to call the Abraham Accords by name, referring instead to “normalization agreements,” the accords, forged during Trump’s tenure, led to normalized relations between Jerusalem and a number of Arab countries, namely the UAE, Bahrain, Morocco and, in partial measure, Sudan.

Most important, the accords have also led to a massive reconfiguration of Israel’s position in the Middle East, with the Jewish state now seen by Arab countries as an ally and asset, instead of a sworn enemy.

In a meeting with Israel’s President Isaac Herzog on Thursday, Sheikh Abdullah said, “This is historic, but I think in many ways this is a relationship which very few thought that in two years it would be as successful.”

Israel has spent much energy touting the success of the Abraham Accords and encouraging other countries to join. In July, U.S. President Joe Biden visited Israel and Saudi Arabia, where there was speculation over warming ties between Jerusalem and Riyadh.

While Jordan and Egypt remain aloof from the developments, in part due to the Palestinian issue as well as widespread anti-Israel public sentiment in the two countries, the Abraham Accords, and Israel’s subsequent close ties with the UAE and Bahrain in particular, have led to agreements on everything from tourism to defense. Trade between the countries has reached approximately $2 billion annually and is expected to pass $10 billion within the next five years; Israeli officials point to this as a sure sign of success, with more to come.

But a poll in July by the Washington Institute reports that the proportion of those who view the Abraham Accords favorably in Saudi Arabia, Bahrain and the UAE “has dropped over the past year to a minority view,” David Pollock and Dylan Kassin said in an analysis.

According to them, “current attitudes contrast with the relative optimism exhibited by a significant percentage of Emiratis, Bahrainis, Saudis and even some Egyptians in the months after the announcement of the Abraham Accords.”

The authors also noted, however, that the data “indicates a countercurrent of openness to allowing business and social ties with Israelis in some parts of the Gulf, especially in comparison to their peers in Egypt, Kuwait and the Levant.” Opposition to allowing business or sports ties with Israel “remains at 85% in Egypt and 87% in Jordan despite long-standing official relations,” they wrote.

It is unclear whether there is a difference in these countries between the older generation, which has spent decades considering Israel as an enemy, and the younger generation, which is connected on social media and may have differing opinions on the subject.

Critics note that the Abraham Accords have failed in a number of ways. First, they have not led to new agreements with other Gulf Cooperation Council countries such as Oman, Qatar or Saudi Arabia, and they do not appear to have led to an improved view of Israel on the street. The agreements have also not led to any tangible improvement on the Palestinian front.

The March 2022 “Negev Summit,” a gathering of foreign ministers from Bahrain, Egypt, Israel, Morocco and the UAE, and facilitated by U.S. Secretary of State Antony Blinken, went off course when Blinken used it to talk about the Palestinian issue instead of focusing on Iran, which was the original purpose of the gathering.

However, according to Gerald Feierstein and Yoel Guzansky of the Middle East Institute, “normalization has opened new opportunities for defense and security cooperation, especially among Israel, Bahrain and the UAE, which share a common perspective on the security threat posed by Iran.”

They said the Negev Forum that grew out of the Negev Summit and which folded Egypt into the Abraham Accords coalition “offered additional possibilities for cooperation on shared interests, including energy, food and water security, health and other issues.”

Jonathan Schanzer, senior vice president of research at the Foundation for Defense of Democracies, told JNS that “normalization is a process, not an event. There is no timeline or handbook for establishing warm ties after decades of enmity.”

Still, he remains optimistic about Israel’s ties with the UAE, Bahrain and Morocco. He is also confident that other Arab countries “will prioritize their national interests over the Palestinian issue.

“Much of the region is undeniably ready to steer their countries toward stability and prosperity,” Schanzer said.

Others are optimistic as well. 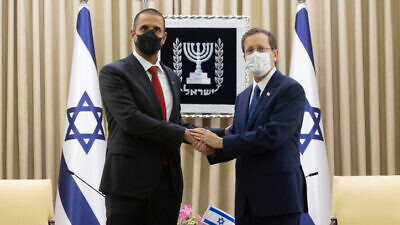 Former Bahraini Ambassador to the U.S. Houda Nonoo, the first Jewish ambassador to be appointed by an Arab country, told JNS, “We must celebrate the milestones between our nations. Through our support of them, coupled with the guiding light that our leaders and their diplomatic emissaries provide, we are able to watch as this relationship reaches its true potential. If this past year is any indication, the relationship between Bahrain and Israel is strong and will continue to flourish.”

She quoted the Chinese proverb that says, “One generation plants the trees; another gets the shade.”

“Our generation signed the accords to create a better future for our children and generations to come,” Nonoo said.

Avi Hasson, CEO of Start-Up Nation Central, said the Abraham Accords “unleashed great opportunity and potential for our region,” noting that the dialogue has shifted from defense and security to innovation and collaboration.

Hasson believes that trade and investment between Israel and the Abraham Accord countries “will double in 2023 and that innovation and technology will continue to play a significant part” in the relationships and cooperation.

In a video interview with the Im Tirzu NGO, former U.S. Middle East envoy Jason Greenblatt suggested that instead of focusing on who will sign next, “we have to recognize the momentum that has happened since the Abraham Accords.”

“Rather than pressure Saudi Arabia and ask, ‘When are you going to sign?’” it is important to recognize that Saudi Arabia “is going through a tremendous transformation,” Greenblatt said.

As an example, he noted that Saudi Arabia has opened up air routes for flights to and from Israel. He added that “while a relationship with Israel is on that list somewhere, it is not on the highest part of the list.”

He believes this is true of Qatar as well but is unsure where Oman stands today.

In 2018, then-Premier Netanyahu visited Oman and met with Sultan Qaboos bin Said, leading to speculation over warming ties. But since Qaboos’s death in 2020, Oman has preferred to maintain a working relationship with Israel, without signing any agreement.

Greenblatt noted that Kuwait and Lebanon are not considering normalization agreements with Israel. However, reports have surfaced over the last few months suggesting that both countries were at some point considering their possibilities.

Avi Melamed, a commentator on Arab affairs and a former Israeli intelligence official, told JNS he does not foresee Saudi Arabia, Oman, Qatar or Kuwait officially joining the Abraham Accords in the near future, “though there is business being conducted between Israel and many of these countries.”

Melamed believes the countries that signed normalization agreements with Israel will deepen the relationships in the coming years “with an emphasis on intelligence, anti-missile and -rocket technologies and cyber, as well as advanced technologies that help solve and mitigate environmental and climate challenges.”