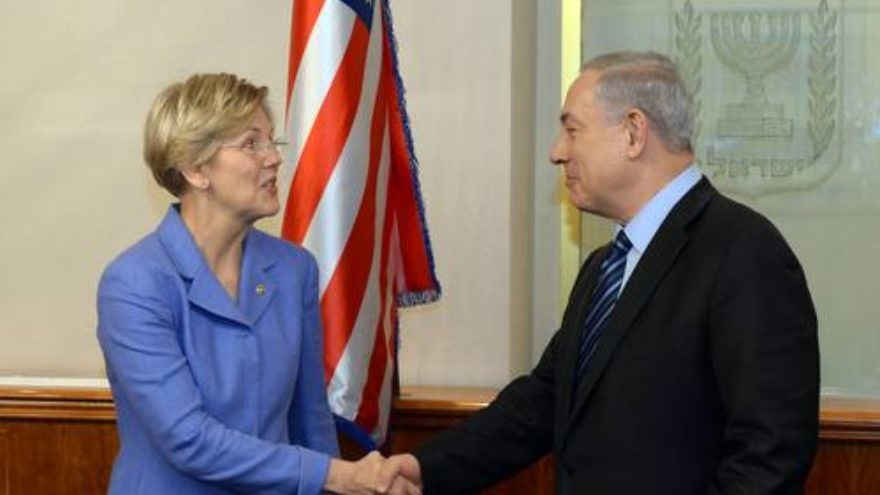 (February 17, 2015 / JNS) U.S. Sen. Elizabeth Warren (D-Mass.) has become a rising star in the Democratic Party through her focus on economic and social issues like income inequality and taking on Wall Street banks, triggering a groundswell of progressive support and calls for her to run for president. But less is known about her views on foreign policy and, by extension, Israel.

Two recent moves by Warren may shed light on her outlook regarding issues prioritized by the Jewish state. She was one of four Democrats on the Senate Banking Committee to vote against the bipartisan Iran sanctions bill co-sponsored by Sens. Mark Kirk (R-Ill.) and Robert Menendez (D-N.J.), legislation that is strongly supported by the American Israel Public Affairs Committee. The bill—which would impose sanctions on Iran if it fails to reach an agreement with world powers by the June 30 deadline—passed the committee 18-4, with six Democrats supporting it.

Warren was also not among the 75 senators to sign a Jan. 29 bipartisan letter to Secretary of State John Kerry stating that the senators would not support foreign aid to the Palestinian Authority (PA) until the Obama administration completes a review of the Palestinians’decision to unilaterally join the International Criminal Court.

“Both of these actions are worrisome signs,” Tevi Troy, who served as White House liaison to the Jewish community under President George W. Bush, told JNS.org regarding Warren’s recent decisions on Iran sanctions and PA funding. “The best place for the pro-Israel community to be is in a place where they have bipartisan support. … I would hope that Senator Warren would return to the bipartisan consensus position in the future.”

Additionally, last September, Warren was not one of the 88 senators to sign a letter calling for the prevention of both the re-arming of Hamas following the Gaza war and unilateral PA actions at the United Nations. By comparison, the other Democratic U.S. senator from Massachusetts, Ed Markey, signed both that letter and the January letter to Kerry on PA funding. (Markey is not on the Senate Banking Committee and as such, could not vote on the Iran sanctions.)

Warren now faces a decision on Israeli Prime Minister Benjamin Netanyahu’s much-debated March 3 address to a joint session of Congress, which the White House has opposed on the grounds that it was not consulted about House Speaker John Boehner’s invitation to Netanyahu. Warren’s office told the Boston Globe that she was disappointed with Boehner’s move. But her office did not directly respond to the newspaper’s question on whether or not she would attend the speech. Following multiple requests by JNS.org, neither Warren nor her representatives granted an interview for this story.

Joshua Muravchik, a fellow at the Foreign Policy Institute of Johns Hopkins University’s School of Advanced International Studies and author of “Making David Into Goliath: How the World Turned Against Israel,” believes Warren’s stances on Iran sanctions (which President Barack Obama has vowed to veto) and the Netanyahu speech represent a safe way to appease her far-left supporters.

“These are ways she signals to her base that she is not pro-Israel at very little political cost, since she is merely supporting the president,” Muravchik told JNS.org.

Last November, Warren made her first official trip abroad as a U.S. senator—to Israel, Jordan, and the disputed Palestinian territories. For many potential presidential candidates or ambitious senators, visiting the Middle East to gain an understanding of the Arab-Israeli conflict is seen as an important milestone in becoming a legitimate contender for leadership posts.

Mary Anne Marsh, a Boston-based Democratic political analyst for the Dewey Square Group, told JNS.org that Warren’s trip to Israel, which included meetings with Netanyahu, Israeli Knesset members, and business leaders, “is instructive on how she may end up on her position regarding Israel.”

“It didn’t surprise me that Warren went to Israel and had a schedule heavy with meetings, because that is how she approaches everything,” said Marsh, adding that Warren is all about “doing her homework.”

Marsh, who said she does not believe Warren will run for president in 2016, said Massachusetts voters “expect our U.S. senators to play a role in foreign affairs, and there’s a long history with that from John Kerry to [former U.S. senators] Ted Kennedy and Paul Tsongas.”

Warren has largely been mum on foreign policy issues since taking office. Yet she represents a state with one of the largest and most influential Jewish communities in the country, and Israel is an important issue for her constituency.

Jeremy Burton, executive director of the Jewish Community Relations Council (JCRC) of Greater Boston, told JNS.org that Warren’s decision to make Israel and Jordan her first overseas trip as a senator was a “fairly significant statement” about that region “being an issue that she is looking to understand and get to know herself.”

Burton, who has briefed Warren in person about Israel and Jewish issues several times, added, “She has a really strong and engaged relationship with the JCRC and the Boston Jewish community leadership. Going back to when she was running for the Senate, she met with the Jewish leadership a number of times, and just this past year she has met with us at least three times on a wide range of issues, including on Israel.”

During her campaign to unseat former Republican senator Scott Brown in 2012, Warren drew heavily on her experience on economic issues, given her roles on the Consumer Financial Protection Bureau and the Troubled Asset Relief Program (TARP) oversight committee as part of federal economic reform efforts following the 2008 financial crisis. Once she became the first-ever female senator from Massachusetts, Warren quickly positioned herself as a leading advocate for Wall Street reform, income inequality, and student loan programs, making her very popular among young progressives. Now, her name has been increasingly floated as a possible alternative to Hillary Clinton in the race for the 2016 Democratic presidential nomination.

Many liberal Democrats have looked for their legislative icons’ stances on the economy to also translate to far-left views on foreign policy and Israel, particularly during last summer’s war between Israel and Hamas in Gaza.

“I watched Twitter very carefully during the Gaza war, and the people on the left were clearly less pro-Israel in the U.S. and very anti-Israel outside of the U.S.,” Troy, the former Bush administration official, told JNS.org.

But when push came to shove, U.S. legislators quickly stood by Israel during Operation Protective. Senate Resolution 498 expressed “support for the State of Israel as it defends itself against unprovoked rocket attacks” by Hamas, and the Senate also passed emergency funding for Israel’s Iron Dome missile defense system. Some liberals expressed their disappointment in Warren for not voicing objection to Resolution 498 and voting in favor of the Iron Dome funds.

“We are disagreeing with Israel using their guns against innocents. It’s true in Ferguson, Missouri, and it’s true in Israel,” John Bangert, a Massachusetts resident who identified himself as a Warren supporter, told the senator during a town hall meeting, the Cape Cod Times reported.

Warren, however, went against the grain of liberal critics of Israel by defending her support for Resolution 498 and criticizing Hamas’s actions during the summer war.

“When Hamas puts its rocket-launchers next to hospitals, next to schools, they’re using their civilian population to protect their military assets. And I believe Israel has a right, at that point, to defend itself,” Warren said.

Warren was also a co-sponsor on the United States-Israel Strategic Partnership Act of 2014, which was passed by the Senate in September and elevates the status of the U.S.-Israel relationship. The anti-war group Massachusetts Peace Action proceeded to challenge Warren on supporting that legislation as well as her stance about the Gaza war, sending the senator a letter expressing that it was “disturbed” by the comments she made in defense of Israel.

Troy said, “I don’t really understand why the left is so critical of Israel, especially given that it is the only place where women and homosexuals have rights, where Arabs can vote. You would think that liberals would celebrate a liberal democracy flowering in the Middle East.”

The JCRC’s Burton dismissed assumptions by some on the far left that Warren would come out against support for Israel.

“When she spoke out publicly [last summer] about Israel being able to defend itself, there were those on the radical left who were disappointed and frustrated by her more than other Democrats… But that is unfounded because she never gave them any indication that she supported them on this,” Burton told JNS.org.

But Warren has also made remarks that have irked supporters of Israel. Last September, she came under fire for comments during a talk she gave at Tufts University in which she called it “fair” when audience member Eva Moseley compared Israel’s actions in Gaza to the Holocaust.

“I was also a Holocaust refugee and I’m extremely concerned that Jews don’t do to another people what was done to them,” Moseley told Warren.

Johns Hopkins University’s Muravchik argued that Warren, through her mixed record on Israel, is seeking to bridge a gap between different camps in the Democratic Party.

“She is walking a tightrope between, on the one hand, her leftist and left-liberal base, which is militantly anti-Israel, and on the other, the mainstream of Democratic voters who remain pro-Israel,” Muravchik told JNS.org.

While Warren has repeatedly denied speculation that she will run for president in 2016, it is apparent that she will continue to remain in the spotlight. As the far left continues to strongly criticize Israel, Warren may find herself in an increasingly difficult position on that issue. By straddling two worlds—the far left and establishment Democrats—the Massachusetts senator may end up becoming a problematic figure for supporters of Israel, Muravchik believes.

“The far-left seeks the destruction of Israel, which [other] liberals generally do not,” he said. “Warren seeks to be a bridge between the two. To the extent that she can serve to amalgamate these two camps, she would represent a danger [to the pro-Israel community].”