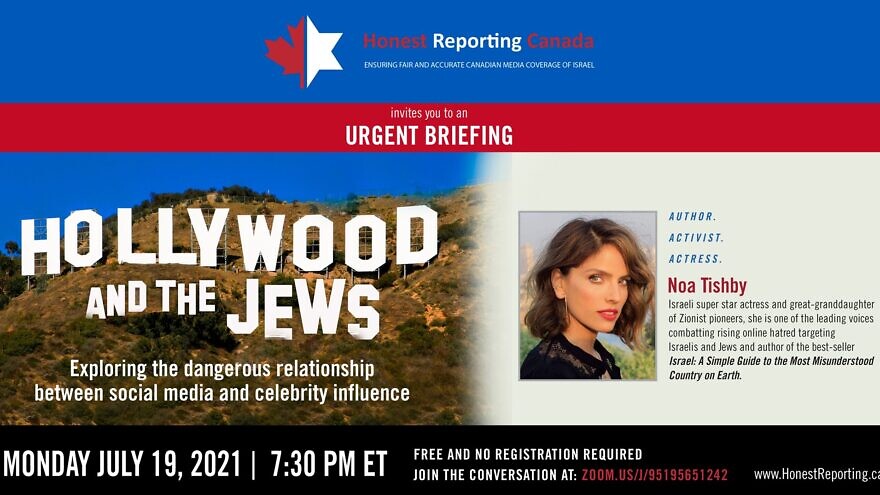 (July 8, 2021, Toronto, JNS Wire) It is no secret that Israel often faces widespread bias in the news media. But that is only one front that the Jewish State faces in its fight against misinformation. Movies, television and social media also present frequent bias against Israel, and combatting that misinformation requires a different and strategic approach.

On Monday, July 19 at 7:30pm eastern time, join HonestReporting Canada for an Insider Briefing, “Hollywood and the Jews,” where participants will explore the dangerous relationship between social media and celebrity influence.

Featuring Israeli actress and social media influencer Noa Tishby, this urgent briefing will give an overview of the ever-expanding world of social media influencers and how their increasing platform presents both a challenge and an opportunity for Israel, and how members of the community can help combat misinformation and bias online.

The webinar is free, and no registration is required.

Republish this article
About The Publishers
HonestReporting Canada
HonestReporting Canada is an independent grass-roots organization promoting fairness and accuracy in Canadian media coverage of Israel and the Middle East. With the assistance of our over 45,000 members from coast to coast, HRC monitors the media, recognizes excellence and exposes inaccuracy and bias in Canadian reporting on the region.
Publish your organization's press release on JNS Wire
Releases published on the JNS Wire are communicated and paid for by third parties. Jewish News Syndicate, and any of its distribution partners, take zero responsibility for the accuracy of any content published in any press release. All the statements, opinions, figures in text or multimedia including photos or videos included in each release are presented solely by the sponsoring organization, and in no way reflect the views or recommendation of Jewish News Syndicate or any of its partners. If you believe any of the content in a release published on JNS Wire is offensive or abusive, please report a release.