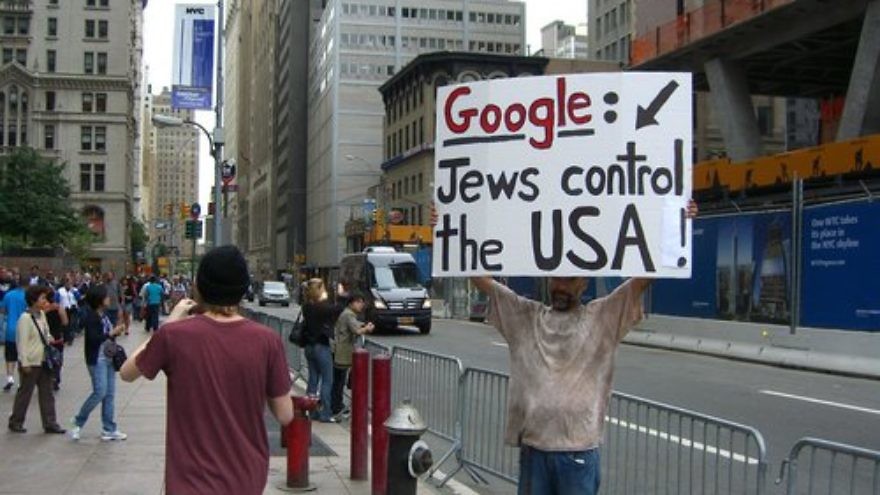 A man holds a sign promoting an anti-Semitic conspiracy theory across the street from the former World Trade Center site on Sept. 11, 2011, the 10th anniversary of the 9/11 attacks. Credit: Luigi Novi via Wikimedia Commons.
Spread the word.
Help JNS grow!
Share now:

(April 1, 2021 / Israel Hayom) More than 60 percent of American Jews “have either experienced or directly witnessed some form of anti-Semitic incident in the last five years,” the Anti-Defamation League said in a statement on Thursday.

“The 2021 poll found that 63 percent of respondents have either experienced or heard anti-Semitic comments, slurs or threats targeting others, an increase from 54 percent a year earlier,” the statement read. “Alarmingly, 9 percent of Jewish Americans indicated in the survey that they had been physically attacked in the last five years because they are Jewish, up slightly from 2020, but still within the margin of error. And one in four Jewish Americans reported having been directly targeted by anti-Semitic comments slurs or threats.”

According to ADL national director and CEO Jonathan Greenblatt, “In the aftermath of major anti-Semitic attacks in Pittsburgh, Poway, Jersey City and Monsey, American Jews are reporting that they feel less safe in the U.S. today than they were just a decade earlier.”

Greenblatt said that “looking back on the past five years, which were bookended by the anti-Semitism in Charlottesville in 2017 and the hateful symbols on display during the breach of the U.S. Capitol on Jan. 6, it is understandable that the level of anxiety is rising and concerns about communal safety are on everyone’s minds.”

The survey was conducted by YouGov, a major data analytics firm, and it gauged anti-Semitism both online and offline among more than 500 Jewish American adults over the age of 18. It has a margin of error of 4.4 percent.