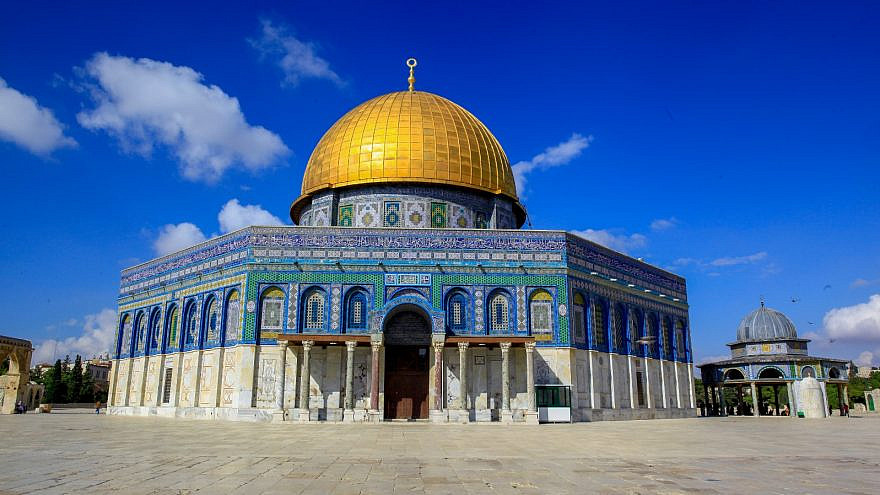 The Temple Mount compound, site of the Al-Aqsa mosque and the Dome of the Rock in Jerusalem’s Old City. Photo by Sliman Khader/Flash90.
Spread the word.
Help JNS grow!
Share now:

(December 7, 2022 / JNS) An Arab man was arrested on Tuesday after attacking a Jewish visitor on the Temple Mount plaza in Jerusalem’s Old City.

The victim, who wished to remain anonymous said, “I stood a little further away from the rest of the group and signaled to the policemen to let them know I was far away. While I was signaling the policemen I felt someone coming up from behind me, grab me, and try to strangle me. I fell to the ground and was released.”

Roei Zaga, a guide from Beyadenu, a student group that promotes Jewish ties to the site, who accompanied the visitors, said, “We were on the western part of the Mount. Suddenly, I saw the policemen running. I turned around and saw them taking down a large Arab man with the … pilgrim standing next to them, his glasses broken and shirt ripped.”

Tom Nisani, CEO of Beyadenu, said that “the Arabs who roam freely on the Temple Mount compared to the restricted groups of Jews encourage the Arabs to feel like the owners of the Temple Mount.

“There must be a decisive and immediate change in the Israeli government’s attitude regarding the Temple Mount to prevent such incidents. Kudos to the policemen who responded quickly in the area and acted … to maintain order and security. Now it must be ensured that the terrorist goes to prison for a long time.”