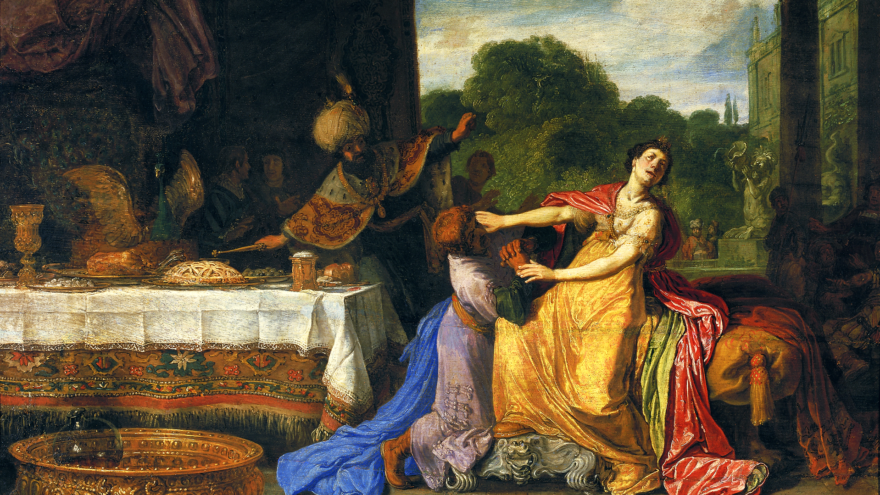 (February 21, 2022 / JNS) Megillat Esther, or the Scroll of Esther, read on the upcoming holiday of Purim, describes the Jewish people’s escape from annihilation in Persia in the fifth century BCE. But really, it’s a quintessential story of Jewish life in the Diaspora, where—absent splitting seas and falling manna—Jews must rely on their wits and influence to preserve themselves and their way of life.

Purim, celebrated this year on March 17, does have one thing in common with every other Jewish holiday, however: It revolves around food. Edible gifts, called mishloach manot, are delivered to friends and family, and the day ends with a feast in commemoration of the wine-tastings Queen Esther hosted for King Ahasuerus and his wicked adviser, Haman.

Still, Purim cuisine is not known for its diversity. For most people, it begins and ends with hamantaschen—the triangular, fruit-filled cookies that represent Haman’s hat, or maybe his pocket (more on that later). In fact, Jews all over the world cook an incredible variety of dishes to celebrate the story of Persian redemption, and these foods tell their own story of Jewish acculturation and continuity.

First and foremost, it’s a story of faith, says Joan Nathan, journalist and author of 11 cookbooks, most recently King Solomon’s Table: “Jewish food is the dietary laws, no question about that. Even if you don’t observe them, I think they’re always in the back of your mind.” But equally, Nathan says, Jewish cooking in the Diaspora is about adaptation. “Going elsewhere, going throughout the world and making these dishes kosher. It’s a quality of Jewish food. Unlike French or Italian cuisine, it’s not limited to a place.”

In Russia and Poland, for example, Jews celebrate Purim with koyletsh—a large, sweet loaf topped with white frosting and sprinkles. It shares a name, and a striking resemblance, to a panettone-like Russian bread served at Easter, but its shape—braided like challah—makes it Jewish. Koyletsh is said to represent the rope used to hang Haman after his downfall.

Giving food a symbolic meaning was a common way of incorporating local cuisine into Jewish culture. “Stuffed foods are really common on Purim to represent the surprises of the story,” says Jonathan Katz, an amateur chef who explores the diversity of Jewish cooking on his blog, Flavors of Diaspora. “One old Eastern European tradition is to serve pierogi, and there are Sephardi traditions to make bourekas on Purim—both have equivalents in surrounding communities.”

In some cases, symbolic meaning was attributed to foods that were already a staple of the Jewish diet. Seasoned chickpeas, another Purim dish, are served because Queen Esther is said to have maintained the kosher laws in the palace of King Ahasuerus by subsisting on legumes. Garbanzos were so closely identified with Jews in Spain that during the Spanish Inquisition, anyone caught cooking them was subject to arrest. But Ashkenazim, who call them arbes or nahit in Hebrew, eat chickpeas primarily on Purim and a few other select occasions, such as during the Shalom Zachor, the first Friday night after baby boys are born.

If the story of Purim food has a protagonist, however, it’s the dessert table. Pastries of every kind abound, and that’s not only because it’s a fun, kid-friendly holiday, Nathan says: “Purim was a time to get rid of your last flour before you’d replenish it after Passover.”

In Sephardic communities, fried dough shaped variously as Haman’s ears, shoes and fingers is dipped into syrup and topped with sesame seeds and powdered sugar. Hojuelas—rose-shaped, fried confections—are enjoyed by Sephardim around the world. European Jews have their own take on eating the enemy. Refusing to settle for a mere ear or finger, German bakers serve gingerbread and lemon (Ha)man-shaped cookies.

But the hamantash, in its many variations, remains the most beloved Ashkenazi Purim dessert. The triangular cookies emerged in the late 16th century, a variation on a medieval German treat called mohntasche, or poppyseed pocket. It was a phonetic similarity that led to the pastry’s rebirth as the bribe-filled pocket of Ahasuerus’s wicked adviser. The hat was a later interpretation, reflecting the fashions of 17th-century Europe (Persians didn’t wear tricornered hats).

Aficionados debate over the dough (yeast is more authentic), and the proper filling continues to be a source of heated controversy among young and old. Nathan prefers a butter crust with orange or poppyseed filling. “My grandchildren like chocolate,” she says, “but it doesn’t do anything for me.”

Hamantashen may never lose their place of honor at the Purim table, yet the diversity of Purim cuisine is a reminder that Jewish life in the Diaspora has its moments of triumph and sweetness. “Jewish cultures and Jewishness are a kaleidoscopic world, and I think we lose something when we insist on only one tradition,” says Katz. “We’re supposed to be joyful on Purim, and what’s better than a range of delicious food to bring joy?” 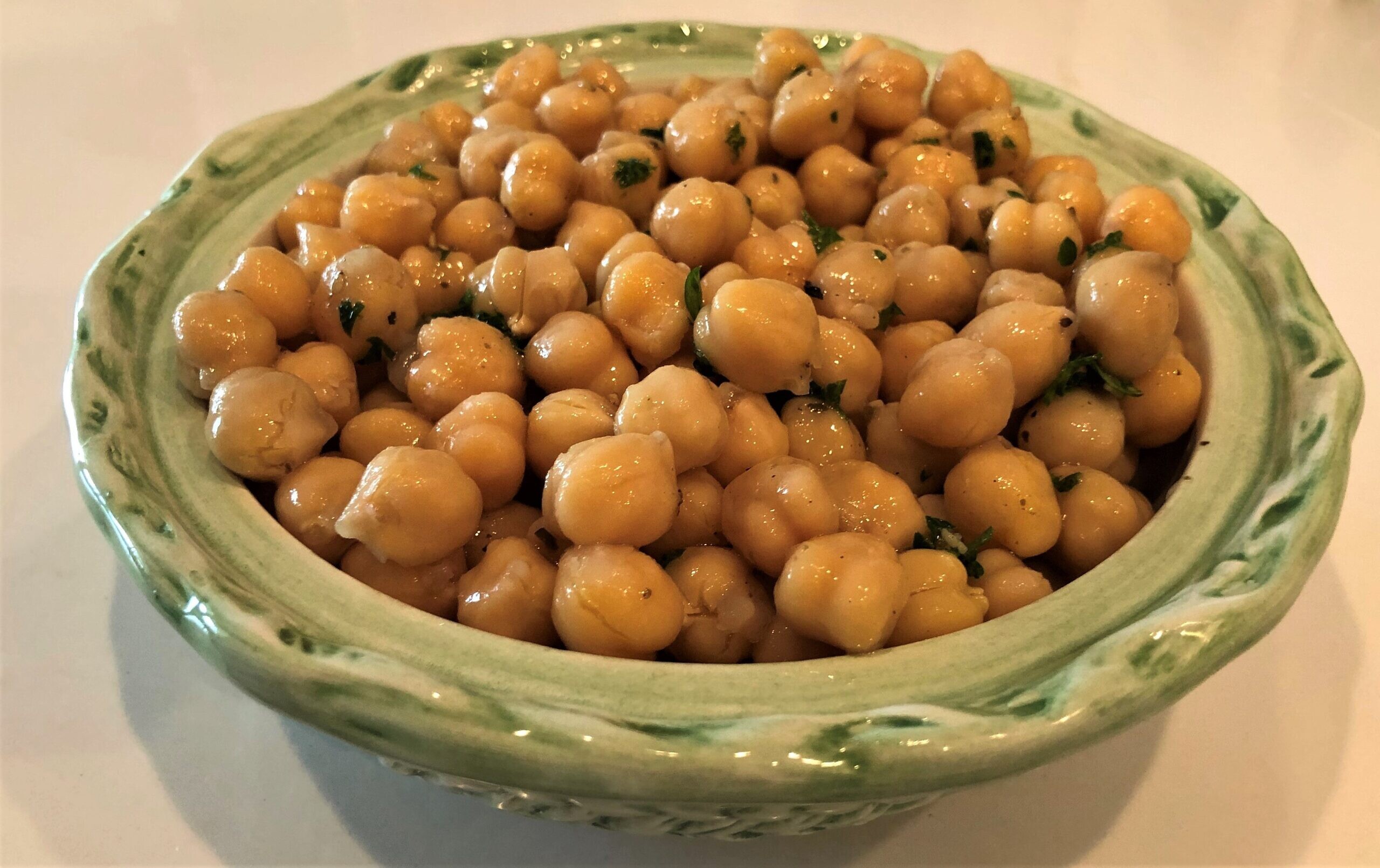 Place chickpeas with liquid from the can in a saucepan. Simmer for a few minutes until heated through.

Drain the water. Sprinkle with salt and freshly ground pepper to taste.

Serve in a dish with toothpicks, or eat the chickpeas as you would sunflower seeds or peanuts. 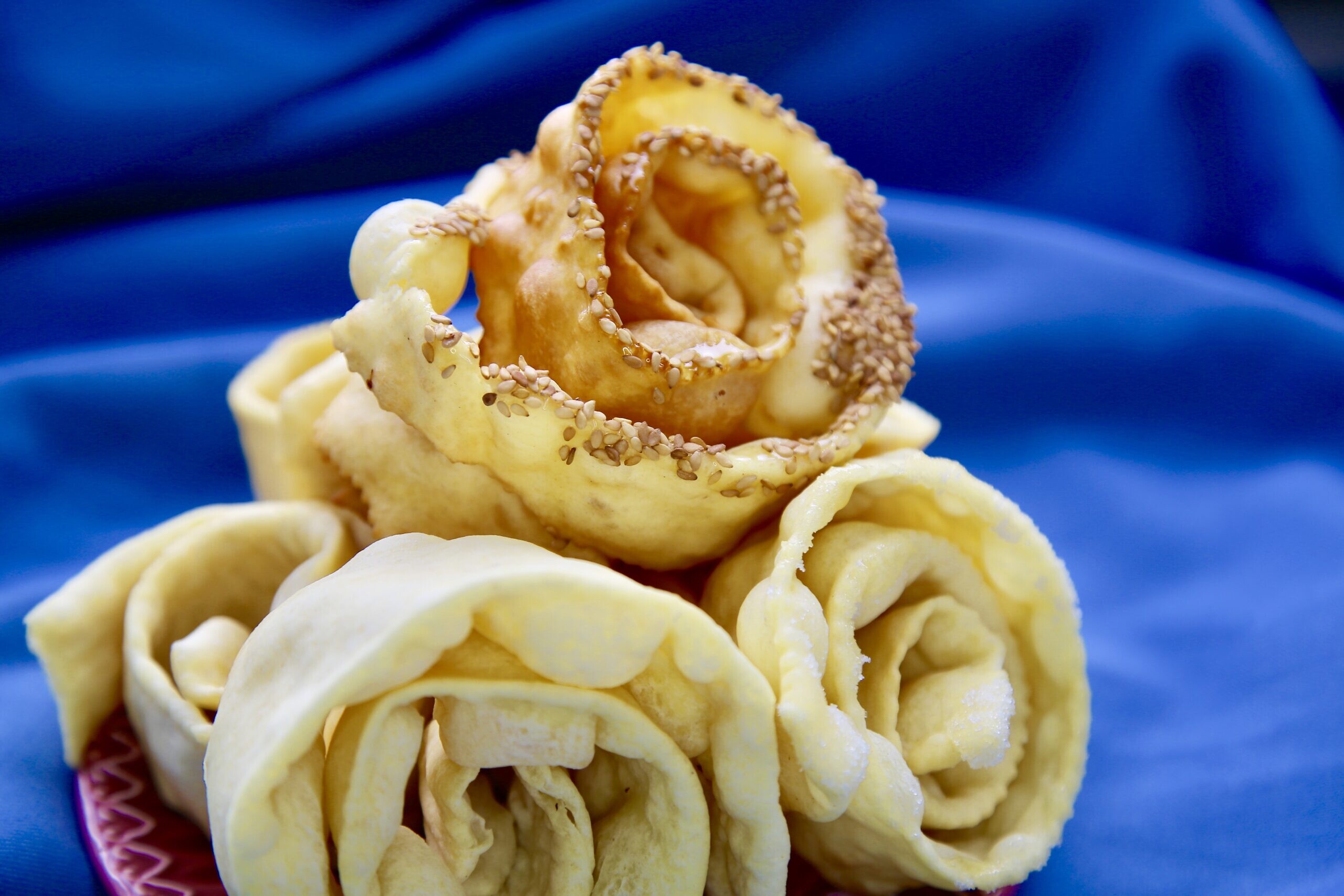 From Sephardi: Cooking the History. Recipes of the Jews of Spain and the Diaspora From the 13th century to today by Hélène Jawhara Piñer (Cherry Orchards, 2021).

Put the flour, the baking powder, the beaten eggs, the sugar, the water, the salt and the oil in a bowl and mix with a spoon. Finish mixing with your hands. The dough should be smooth, without lumps.

Wrap the dough in plastic film and cool for 15 minutes.

Sprinkle flour on your working surface and roll out the dough. It must be thin and not sticky.

Heat the oil over medium heat.

Take a strip in your hand. Gently stick the teeth of a fork into one end of the strip and put the fork in the oil to cook this portion of the strip while keeping the rest out of the pan. Small bubbles will form on the dough. Every two seconds, gently turn the fork to roll up a little more of the strip and fry that bit. Continue like this until the entire strip of dough has been wrapped around the fork and fried.

Set aside and continue in the same way for all hojuelas.

Pour the water, orange blossom and sugar into a pan. Mix everything over low heat for 5 minutes. The mixture should remain very liquid and transparent.

Soak the hojuelas in the sugar syrup—being careful not to break them—and put them onto a serving dish.

Put the sesame seeds and the icing sugar on two separate plates, and dip one side of each hojuela into one or the other alternately.