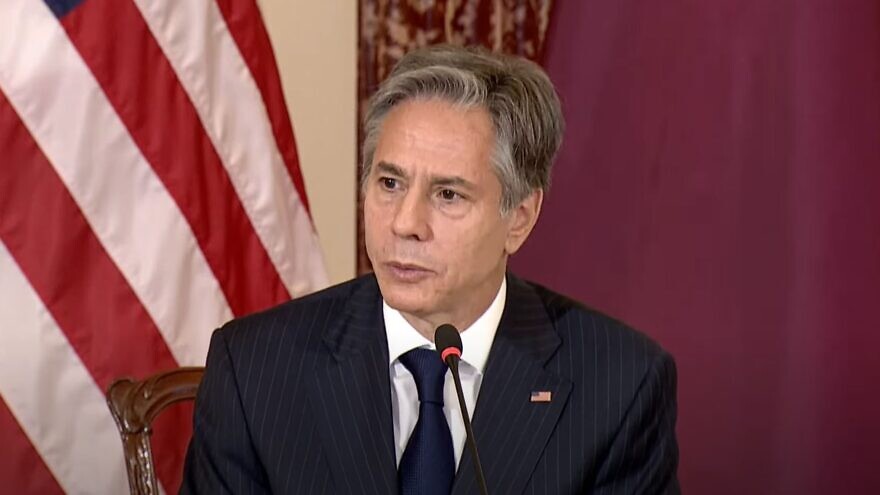 (January 24, 2023 / JNS) U.S. Secretary of State Anthony Blinken will visit Israel and the Palestinian territories next week, where he will meet with Prime Minister Benjamin Netanyahu, Palestinian Authority head Mahmoud Abbas and other high-ranking officials.

The meetings are expected to focus on the Israeli-Palestinian conflict and the Iranian nuclear threat.

The two men discussed Iran’s nuclear program and ways to broaden the Trump administration-brokered Abraham Accords, which normalized relations between the Jewish state and four Arab countries. An emphasis was placed on expanding relations with Saudi Arabia.

Netanyahu expressed gratitude for U.S. President Joe Biden’s commitment to stopping Iran from obtaining nuclear weapons, and stressed that the latest Palestinian moves in the international arena constituted an attack on Israel that demanded a response.

The U.N. General Assembly late last month approved a resolution at the behest of the Palestinian Authority calling on the International Court of Justice to “render urgently an advisory opinion” on Israel’s “prolonged occupation, settlement and annexation of Palestinian territory.”

Blinken’s visit will also aim to “coordinate expectations” between the Biden and Netanyahu administrations, as well as to prepare the ground for a visit by Netanyahu to the United States, which is likely to take place this year.

The Biden administration has formulated a working plan to deal with the new Israeli government, based on the principle that Netanyahu will be held fully accountable by Washington for his government’s actions.

In December, Blinken said during his keynote address to the J Street National Conference that policies, and not the people implementing them, will define the relationship between Washington and Jerusalem.

During his keynote address to the J Street National Conference in Washington, Blinken said, “We will gauge the [Netanyahu] government by the policies and procedures, rather than individual personalities.”  While the United States would adhere to the standards of the U.S.-Israel relationship established in recent decades, he added, “We will speak honestly and respectfully with our Israeli friends, as partners always should.”