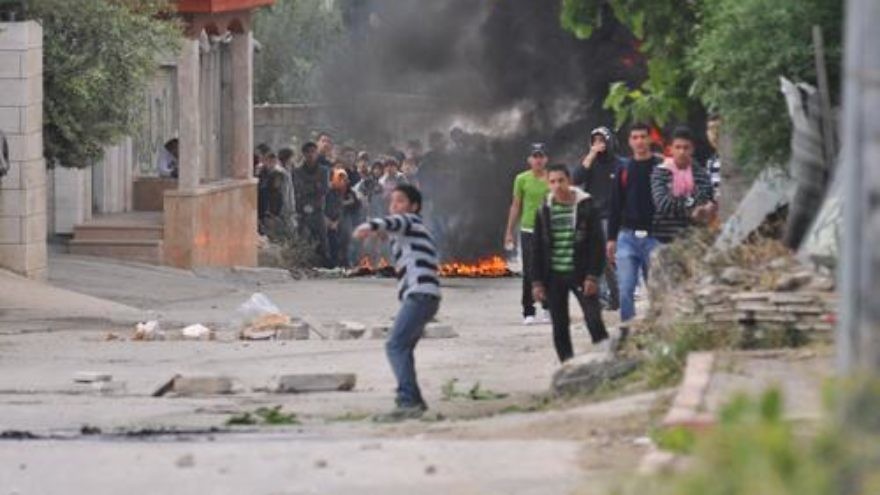 The British government says Israel is being too harsh in giving prison sentences of 15 years each to five Palestinians who murdered a Jewish toddler. Yet when the British had to deal with Palestinian terrorists, they themselves were a lot harsher.

The current controversy has to do with five Palestinian Arab teenagers from the village of Hares who ambushed an Israeli automobile near Ariel in March 2013.

Of course, Palestinians ambush Israeli traffic all the time. They throw rocks, they hurl firebombs, and they shoot rifles at Israeli motorists who are guilty of what we might call “driving while Jewish.” Very few of these attacks are reported in the American news media.

Except on the occasion when they are particularly “successful.” As in the March 2013 attack, when the ambushers caused the Biton family’s car to crash. Their 4-year-old daughter, Adele, was paralyzed and suffered additional injuries. After two years of countless surgeries and suffering, she died as a result of complications from the injuries.

The Palestinian killers should have been tried for murder. But the Israeli prosecutors in this case offered them a plea bargain of 15 years. The killers accepted what has to be one of the most lenient punishments on record for murdering a child.

Yet that wasn’t lenient enough for the British government. Last November, a British diplomat in Israel took the extraordinary step of personally confronting the Israeli prosecutor to “raise our concerns” about the punishment that the killers might receive.

After the murderers recently received the agreed-upon 15-year terms, the British government again expressed its “concern” about what it called “Israel’s child detention policy.” The British don’t seem too concerned about the Palestinians’ child-murder policy. For some reason, their interest is limited to the welfare of the killers, whom they dub “children” because they happen to have been 16 and 17 at the time of the attack.

British Minister for the Middle East Tobias Ellwood is vowing to “continue to monitor developments in the case of the Hares boys and raise the issue with the Israeli authorities.”

Why in the world would the British government take such a special interest in Palestinian baby-killers? According to the British embassy in Tel Aviv, the issue is “of interest and concern to the British public.” I find that difficult to believe. I doubt the average Englishman has even heard of the Hares killers or Adele Biton.

It’s not just that the British government is displaying outrageous indifference to Jewish suffering and immoral sympathy for Arab killers. It’s also the hypocrisy of it all. Because when it was the British who were being targeted by Palestinian Arabs, they weren’t very sensitive about Arab feelings.

Just read Prof. Monty N. Penkower’s masterful new book, “Palestine in Turmoil: The Struggle for Sovereignty, 1933-1939,” and you’ll see what I mean. There he describes the response of the British when a Palestinian Arab from Jenin (in what is now called the West Bank) assassinated a British assistant district commissioner in 1938.

The main suspect in the assassination was taken into custody, and then shot dead “when he tried to escape.” Sure he did. According to the book, “The British military authorities decided that ‘a large portion’ of Jenin should be ‘blown up’ as well. A heavily armed convoy carrying 4,200 kilograms of gelignite carried out the demolition.”

The severe British response in Jenin was not some one-time occurrence. In numerous Palestinian Arab villages where there was rioting or terrorism in the 1930s, the British used Arab-driven “minesweeping taxis”—what we would call human shields—“to reduce British land mine casualties.”

The British also routinely “dynamited the houses of Arab villages” from which there had been attacks on British soldiers or police, the book says.

Was all this dynamiting and minesweeping the work of rogue forces? Hardly. It was advocated and defended by senior British government officials.

For example, Lord Dufferin, undersecretary of state for the colonies, said nobody had a right to complain about the minesweeping taxis because “British lives are being lost and I don’t think that we, from the security of Whitehall, can protest squeamishly about measures taken by the men in the frontline.”

Prof. Penkower also quotes a particularly striking remark by Sir John Shuckburgh, undersecretary in the Colonial Office. He said the British were confronted with “not a chivalrous opponent playing the game according to the rules, but with gangsters and murderers.”

“Gangsters and murderers.” That’s exactly whom Israel is facing right now. That’s exactly who killed little Adele Biton. So before any British officials today start lecturing Israel, maybe they ought to take a look in the mirror.