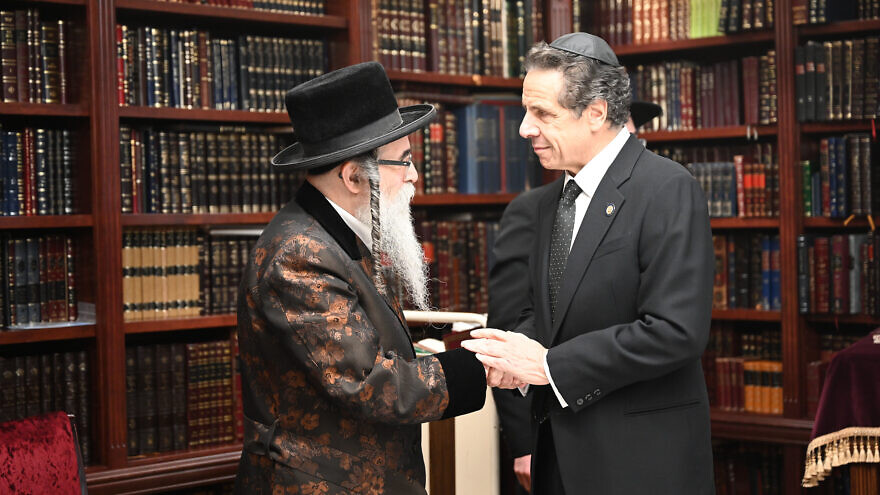 New York Gov. Andrew Cuomo meets with of Rabbi Chaim Rottenberg in Monsey, N.Y., after a stabbing attack at his home and shul on Dec. 28, 2019, the seventh night of Hanukkah. Source: Andrew Cuomo via Twitter.
Spread the word.
Help JNS grow!
Share now:

(January 15, 2020 / JNS) New York Gov. Andrew Cuomo announced on Monday the allocation of more than $680,000 to install license-plate readers throughout Monsey and the neighboring village of New Square to help protect Jewish communities in the area.

The new measure comes two weeks after the anti-Semitic machete attack at a rabbi’s home in Monsey during Hanukkah. Police said they used license-plate readers installed on the George Washington Bridge to catch the suspect, 37-year-old Grafton Thomas, after one Jewish man who witnessed the attack wrote down Thomas’s license-plate number.

Cuomo said at the press conference in Airmont, N.Y., that the license-plate readers will be installed on street lights, street poles, highway overpasses, mobile trailers and police squad cars, News 12 Westchester reported. The devices will track anyone driving in or out of the area and help police catch those who commit crimes.

“If anyone thinks about attacking the community, they better think again. Because we will know, we will find out, and we will prosecute you to the fullest extent of the law,” said Cuomo.

The governor added that his next step will be to increase funding to the state’s hate crimes unit, add funding for security measures at non-public schools and religious institutions, and pass a domestic terrorism law, according to the Jewish Insider.