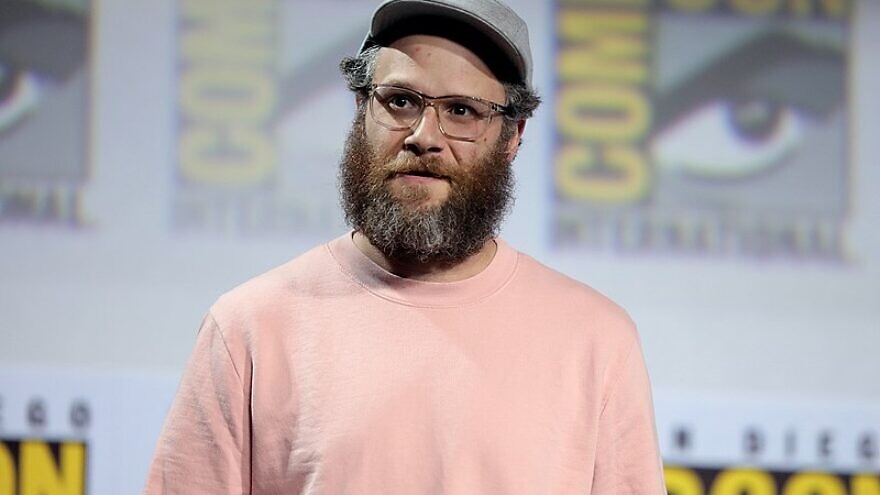 The Jewish Canadian-American’s public remarks have been interpreted by some as delegitimizing Israel’s existence.

Last week’s event, which remains available for the public to view online, included short speeches by Holocaust survivors from 15 countries, including some who have recently been resettled from Ukraine. Jewish communal leaders paid tribute to the survivors, as did Israeli President Isaac Herzog, German Chancellor Olaf Scholz, and celebrities including Henry Winkler, Barbra Streisand, Dr. Ruth Westheimer, Jason Alexander, Tovah Feldshuh and Rogen.

Not everyone was pleased.

Controversy has dogged Rogen for remarks he made on a podcast that aired in July 2020, coinciding with the release of his then-new movie, “An American Pickle.”

Asked on “WTF with Marc Maron” by podcast host and fellow comic Maron if he would ever live in Israel, Rogen answered, “No.” He went on to express security concerns, then to state, “… don’t understand, to me it just seemed like an antiquated thought process, like if [Israel] is for religious reasons, I don’t agree with it because I think religion is silly.

“If it is for truly the preservation of the Jewish people it makes no sense,” he continued, “because again, you don’t keep something you’re trying to preserve all in one place, especially when that place has proven to be…pretty volatile.”

Rogen added, “And I also think that as a Jewish person, like, I was fed a huge amount of lies about Israel my entire life….They never tell you that, ‘Oh, by the way, there were people there.’ They make it seem like it was just, like, sitting there, the f***ing door’s open.”

Rogen, whose parents met at Kibbutz Beit Alfa in the Galilee, has said his remarks were part of a comedic discussion and have been taken out of context.

He also said he was not aware anti-Israel forces were using his statements, and he is concerned about antisemitism, according to Israeli President Isaac Herzog, then the chairman of the Jewish Agency, who wrote about a conversation he had with Rogen on the matter. Rogen said he had been joking, that the jokes were misunderstood, and he apologized for the remarks, according to Herzog.

However, Rogen later appeared to distance himself from Herzog’s version of events and deny apologizing for his remarks on the podcast.

JNS contacted several of Rogen’s publicists seeking an interview but did not receive a response by press time.

Hikind believes that at a time of rising antisemitism and growing efforts by Israel’s enemies to push false narratives about the Jewish state and to isolate Israel, the problem with Rogen’s inclusion in the Claims Conference event is that he has reinforced misinformation about Israel.

“He said it was out of context, but I listened to the whole [podcast],” said Hikind. “It is horrible. It is…reinforcing lies that Israel’s enemies tell about Israel. So do we need to give him honor? To recognize him? Bring him to Jewish events? Why? It is a sad commentary on us.”

In response to questions about the propriety of asking Rogen to headline an event, given his past anti-Israel remarks, Claims Conference President Gideon Taylor replied by email, “Two years ago, President of Israel Isaac Herzog, who was then chairman of the Jewish Agency, had a discussion with Mr. Rogen stating: ‘At the start, Seth was kind enough to make clear to me that what was missing in the published interview was what he did not say: How important Israel is to him. And that, of course, Israel must exist.’

“President Herzog went on to say, ‘Rogen told me that [his original remark] is not at all what he meant and explained his words were meant as a joke, taken from a critical, humorous exchange with a fellow Jewish comedian. He was misunderstood and apologized for that, and I accepted his explanation.’ We accept the conversation between President Herzog and Mr. Rogen,” Taylor said.

He added, “Seth Rogen is immensely popular and helps draw a younger and more diverse audience—exactly those who we seek to engage with Holocaust education….We need to expose those people to Holocaust survivors, what they went through, and their resilience.”

Some said that Rogen’s words in one particular podcast are not the only public behavior that makes him a problematic spokesman for Jewish causes.

Brooke Goldstein, director of the Lawfare Project, a New York-based nonprofit combating antisemitism, characterized Rogen’s past treatment of pro-Israel journalist Eve Barlow as “immature public bullying of a Jewish woman,” a reference to him joining in ridiculing Barlow.

Barlow, a Los Angeles-based Scottish-American journalist who has reported extensively on rising anti-Semitism across the political spectrum, wrote a piece for Tablet magazine describing being trolled by thousands of antisemites who created a hashtag #EveFartlow and tweeted it at her.

Rogen joined in the online campaign against her—viewed by many as having been abusive and which Barlow herself characterized as a “social media pogrom”—by tweeting a “wind” emoji (used online to depict flatulence) at her.

Wrote Barlow in Tablet, “Every time I tweet, this title [#EveFartlow] is the response I attract, and it is pelted at me irrespective of what I write.”

Goldstein added that she believes Rogen’s inclusion in a program honoring Holocaust survivors, given his past behavior and remarks towards fellow Jews who are Zionists, “sends the wrong signals to the Jewish community—that we can be abused, slandered, and then reward those who abuse us.

She added, “The Claims Conference is way too important an organization to have made such a callous mistake.”

The Claims Conference, also known as the Conference on Jewish Material Claims Against Germany, represents the world’s Jews in negotiating compensation for victims of the Holocaust from the German government. The organization also allocates social welfare services to Holocaust survivors and promotes education.

Hikind said that Rogen’s comments questioning the value of Israel’s existence render him an especially inappropriate and ironic choice for such an event.

“This was an event honoring Holocaust survivors, and Israel is the Jewish state we did not have during the Holocaust,” said Hikind. “People could’ve gone there instead of ending up in gas chambers when no one was interested in letting them come, and now that state is under attack.

“For Seth Rogen to have made the remarks he’s made disqualifies him from these types of events, and I think if the survivors knew about the remarks he has made, they wouldn’t want him.”

Mort Klein, president of the Zionist Organization of America, weighed in.

“My father, Holocaust and Auschwitz survivor Rabbi Herman Klein, taught me if you’re serious about fighting Jew-hatred and Israel-bashing, you…destroy the credibility of those promoting this monstrous bigotry,” said Klein. “The Claims Conference is legitimizing and mainstreaming anti-Jewish bigotry and Israel-hatred by giving a platform to ignorant Seth Rogen.”

But Abe Foxman, former head of the Anti-Defamation League, said he does not believe the Jewish organizational world should cancel Rogen, despite any past mistakes he might have made.

“I’ve always believed you can change people’s minds and hearts,” Foxman told JNS. “If we embrace cancel culture, we are all going to be canceled. If someone wants to do something positive, to embrace the positive in Jewish life, I think we should welcome that.”