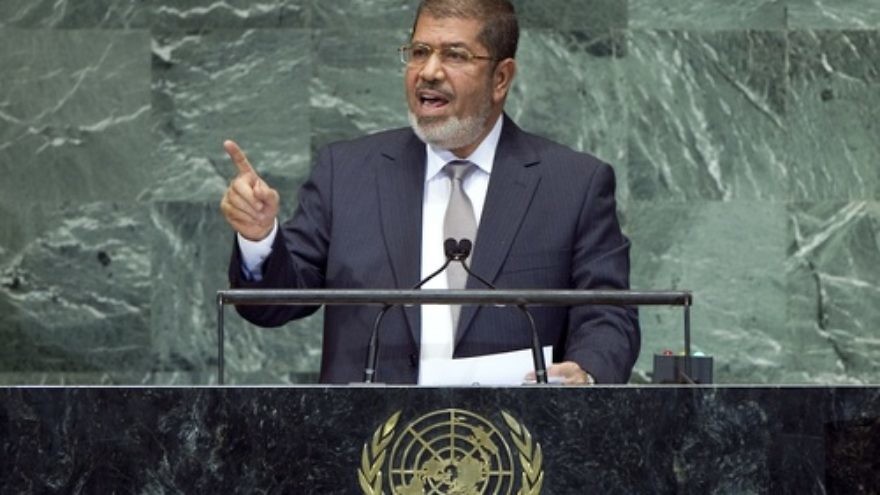 (April 15, 2013 / JNS) In an unprecedented move, the head of Egypt’s 2,000-year-old Coptic Christian Church, Pope Tawadros II, recently slammed Islamist President Mohamed Morsi for what he called a weak response to violence that left several Christians dead and its religious institutions violated. Pope Tawadros’s statements come at a time of increasing political deadlock and the threat of economic collapse in Egypt.

On April 5 in the village of Khosous, north of Cairo, a local dispute between youths escalated into violence that left four Christians and one Muslim dead, according to Time Magazine. Two days later, during a funeral for the four Christians at St. Mark’s Cathedral in central Cairo, Christian mourners were attacked after leaving services. One Muslim and one Christian were killed, and another 89 were injured. Police responded late to the attacks and fired tear gas into the Cathedral’s grounds, terrifying the Christians there.

During a subsequent interview with the Egyptian TV station ONTV, Tawadros said that the Egyptian state was “collapsing” and described the attacks on Christians at St. Mark’s Cathedral, which serves as the seat of the Coptic papacy, as “breaching all the red lines,” the Associated Press reported.

During the interview, Tawadros called out Morsi’s response to the attack, saying his attitude “comes under the category of negligence and poor assessment of events.” Tawadros added that Morsi told him in a telephone conversation that he would do everything to protect the cathedral, “but in reality he did not.”

Since being elevated to the Egyptian Papacy late last year, Tawadros has taken a more outspoken approach in speaking out against persecution of Christians in his native Egypt. Last fall, he took the unprecedented step of criticizing Egypt’s new constitution as too Islamist and biased against Christians.

“His predecessor, Pope Shenouda III, refrained from directly confronting [President Hosni] Mubarak and his regime. But it looks like the current Pope Tawadros is fed up, especially with the unprecedented attack on the cathedral,” Meawad told JNS.org.

Nathan Brown, professor of political science and international affairs at George Washington University, told JNS.org that the recent attack is unlike most other Muslim-Christian violence.

“There have been episodes of sectarian tension before, but the violence at the Coptic cathedral was still deeply shocking to many Egyptians. This is in a central location, and the incident cannot be explained away as a dispute among families that got out of hand, as are many incidents [between Muslims and Christians] that take place in villages or poorer neighborhoods,” Brown said.

For Coptic Christians, and also many Muslim Egyptians, the institution of the Coptic Church and St. Mark’s Cathedral are symbols of national pride that connect Egyptians to their pre-Islamic and even their Pharaonic past.

“The Coptic Church has been national symbol of the Egyptian people for thousands of years; it has always been recognized as a national institution. This attack cannot be ignored,” Meawad said.

One of the oldest communities in Christianity, the Coptic sect has survived numerous persecutions in the past. According to tradition, their church was established by one of Jesus’s apostles, Saint Mark, in 42 CE. Even its liturgical language, also named Coptic, descends from the ancient hieroglyphic language spoken in the times of the Pharaohs.

Coptic Christians constituted a majority of Egypt’s population until the Middle Ages, when Islam, introduced by the Arab invasions in the 7th century, eclipsed their religion. Today, Coptic Christianity comprises nearly 10 percent of Egypt’s 85 million people, making it the largest single Christian community remaining in the Middle East.

The growing Muslim persecution of Christians and the nature of Morsi’s response are provoking a growing chorus of objections from people who contend that the Egyptian state is collapsing.

“The revolution has been hijacked [by Islamists] and that is why we are suffering today. Egypt is now collapsing on the political and economic levels and we are paying a dear price,” said Mohamed ElBaradei, former chief of the International Atomic Energy Agency and leader of Egypt’s liberal and secular opposition, the National Salvation Front (NSF), a few days after the Cathedral attack, Al-Arabiyareported.

Egypt is currently mired in political deadlock and economic crisis. Egypt’s main opposition, the NSF, rejected the new constitution passed on December 2012 as too Islamist and is boycotting upcoming parliamentary elections. Meanwhile, according to The Economist, Egypt’s foreign currency reserves—generally seen by economists as one measure of a state’s economic strength—have fallen from around $36 billion before the January 2011 revolution to $13 billion, as international investors and tourists stay away.

Yet George Washington University’s Brown does not believe Egypt is in danger of an imminent collapse.

“I do not think that the Egyptian state will collapse,” Brown told JNS.org. “Most institutions are still strong. But they [the Muslim Brotherhood-led government] are not able to act coherently, nor have they been containing the violence.”

With the Muslim Brotherhood having a difficult time governing and losing popularity among Egyptians, some have speculated that the ultra-conservative Salafis, who won more than a quarter of the vote in parliamentary elections last year, or even the military might take power. But Brown thinks neither scenario is likely at this time.

“The biggest danger at this point seems to me to be political decay,” he said. “I do not think the Salafis are prepared to govern by themselves, but the polarization in Egyptian political life may lead the Brotherhood into alliance with them (they are otherwise rivals). Military intervention is possible but not likely.”

The instability and growing Islamist power in Egypt has put the rest of the Middle East, particularly Israel, on edge. Lawlessness in the Sinai Peninsula has forced Israel to erect a 140-mile fence to prevent terrorist attacks, weapons smuggling and illegal immigrants from entering the country.

“At this point, politics in Egypt is very inward looking,” Brown said. “I do not think we are likely to see the country’s leadership able to sustain a strong or assertive regional role. But over the long run, I do not think an unstable Egypt is in anybody’s interest.”

From what Meawad is hearing from friends and family in Egypt, there is a “huge sense of disappointment in the revolution and fear of the future.”

“While things were not exactly rosy [for Coptic Christians] under Mubarak, he had different objectives than the Muslim Brotherhood,” Meawad told JNS.org. “Mubarak was concerned with maintaining his grip on power and establishing a dynasty by putting his son, Gamal, into power. The Muslim Brotherhood, on the other hand, their objective is not to establish a dynasty, they want to establish a Caliphate [Muslim empire] and drive all the Christians out or suppress them.”

“I immigrated [to the U.S.] back in 1969; at the time it was unusual for Coptic Christians (or any Egyptians for that matter) to leave Egypt,” Meawad said. “Nowadays, the lines at all the Western embassies are long and they [Coptic Christians] are desperately applying for visas; they just want to flee to anywhere that will take them.”