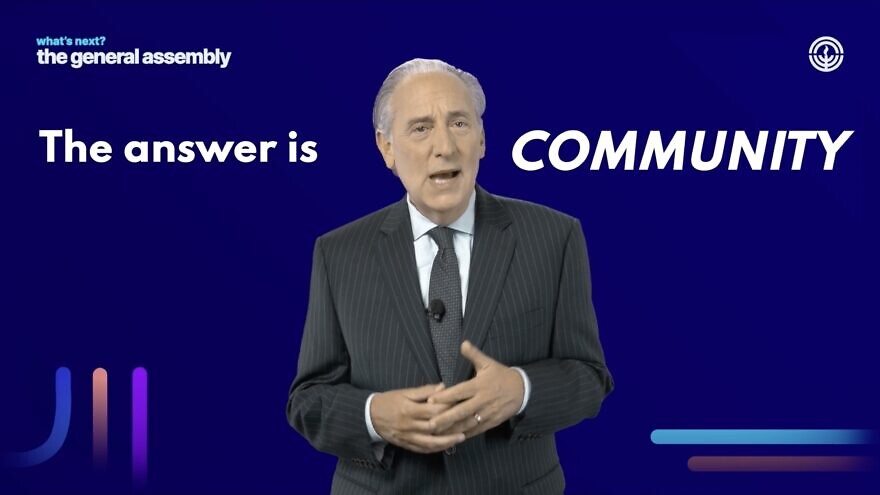 (October 4, 2021 / JNS) For the second year in a row, the Jewish Federations of North America (JFNA) decided to go virtual, condensing its traditional multiple-day General Assembly into a 90-minute online video stream on Sunday due to the ongoing coronavirus pandemic.

The conference highlighted the fact that despite an unusual year-and-a-half, JFNA has had more to do than ever in the midst of the COVID crisis and a worldwide rise in anti-Semitism. Multiple speakers noted the goal of strengthening Jewish communities, both in identity and physical security.

Despite the hardships, JFNA president and CEO Eric Fingerhut said he was optimistic about Federations’ abilities to continue developing the Jewish community.

“What makes me an optimist is that our Jewish camps were filled with joy and laughter and song this past summer, and that our day schools are open and safe, and teaching our children with skill and love,” he said. “What makes me an optimist is that with our children finally back at college, our Hillels and Chabad Houses were full to overflowing for the opening barbecues and the first Shabbat of the year and the High Holidays.”

Fingerhut said that last year, while the federation’s human services agencies that provide mental health, vocational services and cash assistance were under stress, JFNA raised $18 million in matching funds from foundations and individual donors, which through its 100-plus federations was multiplied into $62 million.

“In just the last four months of 2020, 100 percent of that magnificent sum was sent to our frontline service providers across the continent, and this was just one of many examples of the leadership and generosity of federations, foundations and so many individual donors that carried us through the challenges of the last 18 months,” he said.

The biggest announcement of this year’s GA was a three-year initiative called LiveSecure, geared to ensure that all 146 communities across the country with a Jewish Federation have the Community Security Initiative, which is currently in place at 45 Federations nationwide.

“That will more than triple the current number of communities with comprehensive community security initiatives,” said Julie Platt, JFNA national campaign chair and chair of LiveSecure. “And we want to help our existing security initiatives to upgrade and continually address emerging threats.”

According to JFNA, the Community Security Initiatives serve as a single point of contact for critical incident coordination, information and intelligence sharing, safety and security training, and resources for every Jewish institution in a community.

The initiative will last three years and cost $54 million, which according to a JFNA news release is the largest campaign in Federation history.

Two non-Jewish speakers at the GA hammered home the increase in anti-Semitism that even they have been witness to, despite being outside of the Jewish community.

In an interview, Rep. Ritchie Torres (D-N.Y.), vice chair of the House Committee on Homeland Security, warned about increased anti-Semitism and the BDS movement. Torres also made it clear, in a question-answer session during the GA, that he believes anti-Zionism is anti-Semitism.

“We are sitting on a powder keg of anti-Semitism, and the Jewish community and all of us cannot afford to be complacent,” he said. “The stakes are high, and we have to find with the urgency of now.”

Diametrically opposed to Torres in politics, former U.S. ambassador to the United Nations Nikki Haley, a Republican, described her witnessing anti-Semitism at the United Nations and beyond, citing the fringe conspiracy accusing Jews of causing and profiting from the pandemic. 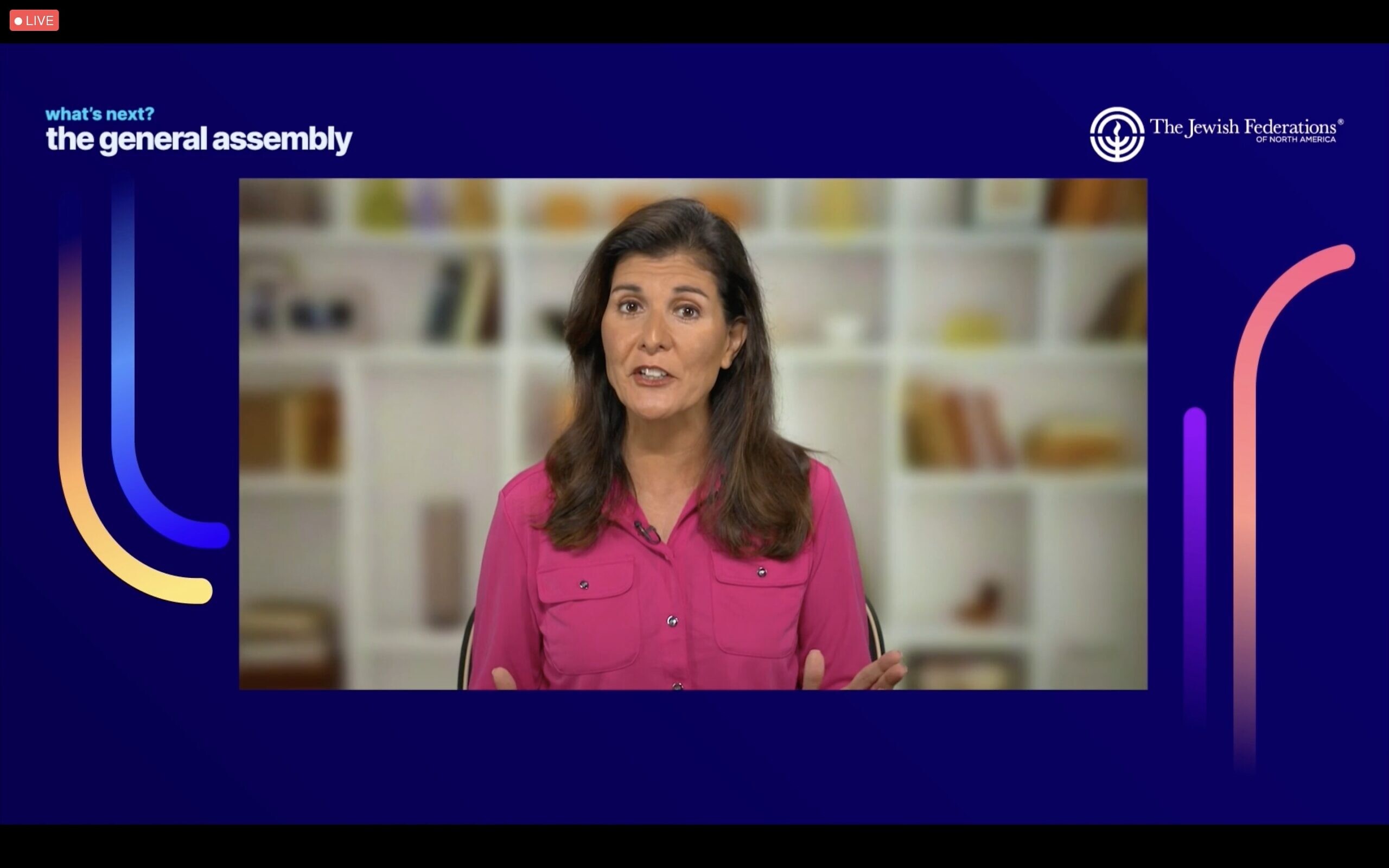 “Your work is always important. It’s also becoming more urgent, especially when it comes to protecting Jewish communities from harm. The ancient evil of anti-Semitism is on the rise. I encountered this sad reality at the United Nations,” said Haley. “Hateful governments like Iran didn’t even bother to hide their hostility toward Jews. I heard it in their words; I saw it in their deeds. Other countries were more subtle. They didn’t go after the Jewish people. Instead, they went after the Jewish state. No other country faces so many insults. No other country is singled out for such attack.”

Israeli President Isaac Herzog addressed participants near the end of the GA, calling for a closer relationship between Jews in Israel and the Diaspora.

“No matter how we break down the numbers, there is no doubt that being Jewish and love of Israel is becoming a challenging, complex issue for some in the young generation of North American Jews,” he said. “It is almost too painful to express aloud, but an increasing number of young Jews no longer feel a bond with the Jewish collective.

“Too many American Jewish youths are disinterested in what being Jewish means and, in the complex understanding of the realities and challenges facing Israel. Some of them—a very small minority—are too willing to accept distorted labels and libels against a Jewish state. At the same time on the other side of the ocean,” he continued, “far too many Israelis show little interest in Jewish life outside of Israel, and lack a nuanced understanding of their sisters and brothers in the Diaspora.” 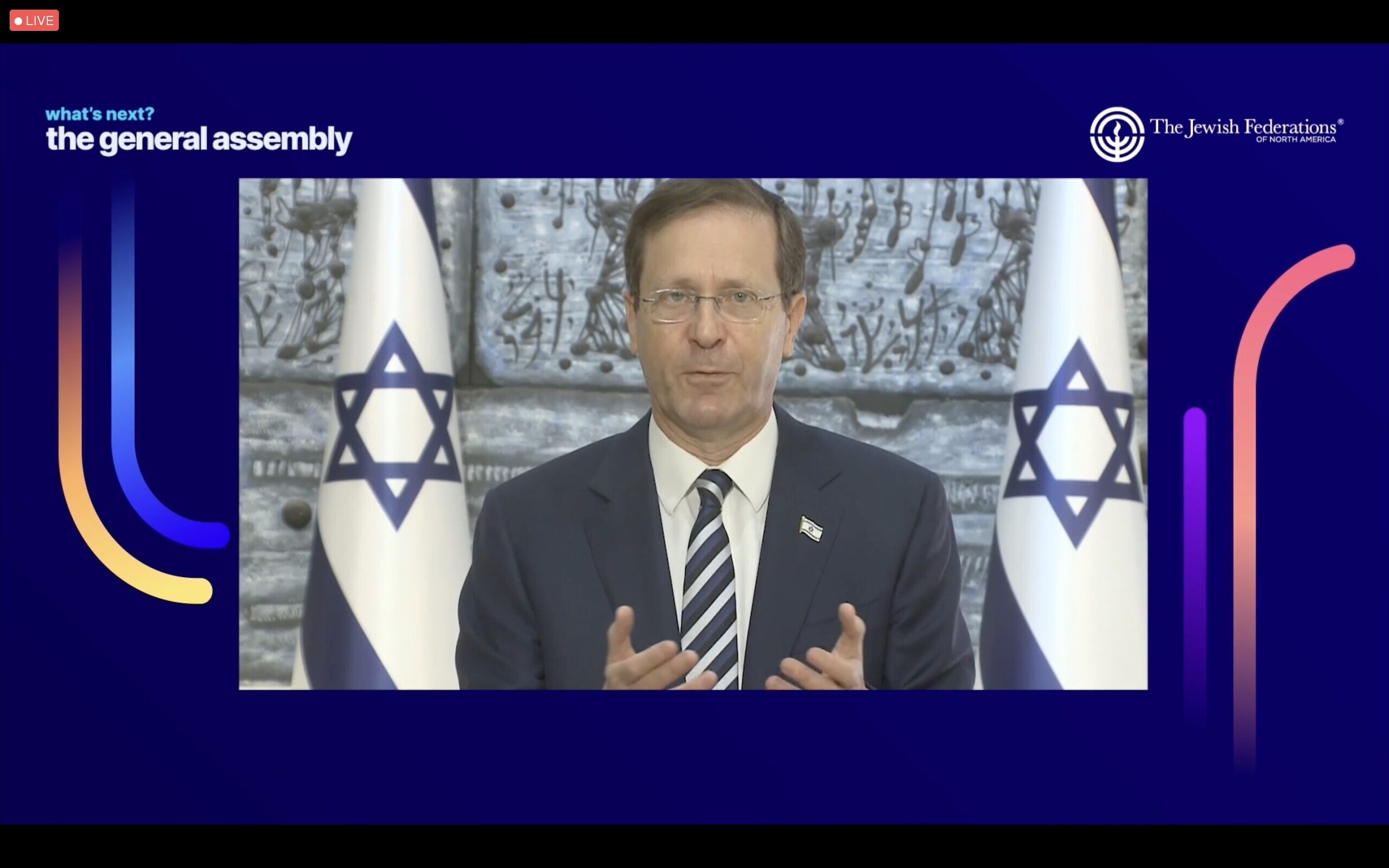 The pandemic, he said, reaffirmed the significance of community and Jewish organizations like JFNA, which during good times can be overlooked and which have been critical for the survival of Jewish communities in the past 18 months.

“I cannot imagine a Jewish world vacant of community and solidarity,” said Herzog. “I cannot imagine a world in which Jews in North America are fearful of living publicly as Jews, and experience attacks and intimidation, at times in their colleges, at times in their synagogues, and elsewhere and the Jewish collective, as well as Israelis, do not feel compelled to act immediately on their behalf. Just as I cannot imagine a world in which the existence of Israel is questioned, and American Jews do not defend the State of Israel.

“This is the main crux of my message today,” he emphasized. “We must all act together. We have the leadership, we have the strength, the resources, the structure to overcome any setbacks, and we must do this. As president of the State of Israel, I will make it my mission to strengthen the lines of communication, to reinforce the underlying bonds and mutual responsibility.”