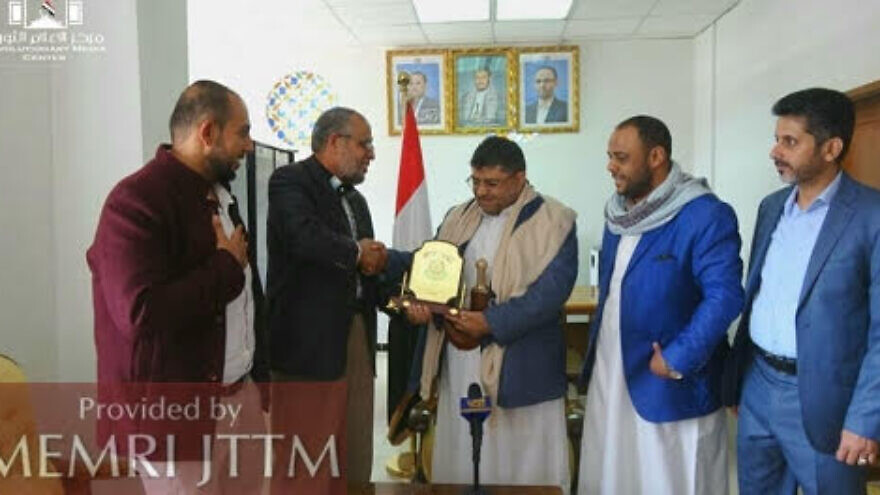 On June 6, 2021, about three weeks into the campaign, the Hamas representative in Yemen, Mo'az Abu Shamala presented an honorary plaque to Muhammad 'Ali Al-Houthi, in recognition of his support for the movement. (Credit: Palinfo.com via MEMRI)
Spread the word.
Help JNS grow!
Share now:

The listeners of the radio station, SAM FM, contributed the sum during the “Al-Quds [Jerusalem] is Closer Than Ever” fundraising campaign, said Ansar Allah leader Abdul-Malik Badr al-Din during fighting between terrorist groups in the Gaza Strip and Israel in May.

On June 29, according to MEMRI JTTM, it was reported that the Central Post Office transferred a third payment of 137,232,000 Yemeni rials ($540,000) of the funds raised to representatives of the Palestinian factions.

Minister of Telecommunications and Information Technology, Mesfer Abdullah al-Numair, stated that by June 29, the bank account at the post office contained a total of 607 million Yemeni rials ($2.4 million).

At a ceremony for the launch of the fundraising campaign, a member of the Ansar Allah supreme political council, Muhammad ‘Ali al-Houthi said: “There are those who will say that it would have been preferable to invest the money in salaries and in hospitals. That is true and money should be invested in these areas, but we place Palestine at the top of our priority list, before the needs of our people and before those of our sick people.”