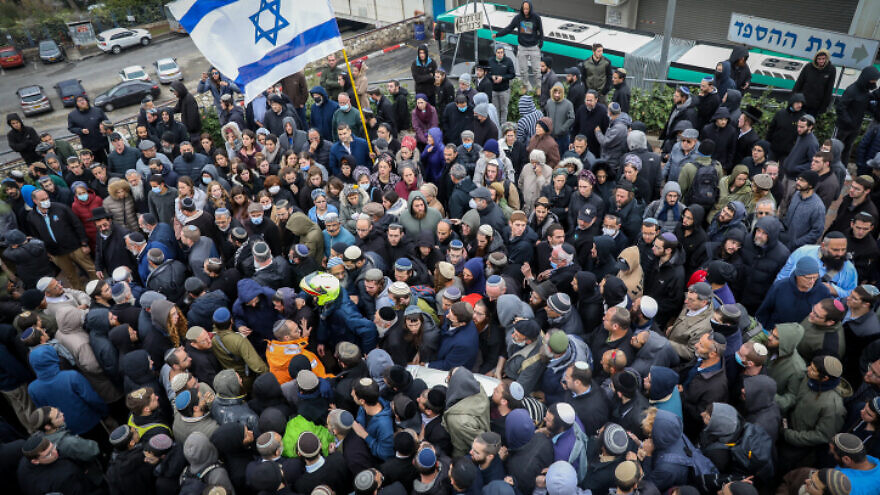 Family and friends attend the funeral of 25-year-old yeshivah student Yehuda Dimentman, who was shot and killed in a Palestinian terror attack near Homesh, at Har HaMenuchot cemetery in Jerusalem on Dec. 17, 2021. Photo by Noam Revkin Fenton/Flash90
Republish this article
538 WORDS
Spread the word.
Help JNS grow!
Share now:

(December 17, 2021 / Israel Hayom) Hundreds of mourners joined the funeral procession on Friday morning for Yehuda Dimentman, who was shot and killed on Thursday in a terrorist attack at the Homesh outpost in Samaria.

Dimentman, a 25-year-old yeshivah student, is survived by his young widow and 18-month-old son.

The funeral procession left Homesh at 9 a.m. with the funeral scheduled for noon at Har HaMenuchot cemetery in Jerusalem.

Neria Shlomo Perlzman, 25, who was wounded in the same attack that claimed Dimantman’s life, was driving the car when terrorists opened fire. Speaking to Israel Hayom, Perlzman said that it took place at the exit from the outpost.

“We were hit with a round of billets, and I realized right away that it was shooting. I turned the car to the left and hit it toward the road, while another round was being fired. The bullets hit the wheels and caused a flat tire, so we drove like crazy to Shavei Shomron, where the responders treated us,” he said.

Perlzman said that the yeshivah in Homesh had reached out to security forces, asking them to handle the fireworks and rocks thrown at residents along the road near the outpost, but the request had been “ignored.”

“I hope they won’t start talking about a need to leave the outpost because of the attack—the opposite, we need to increase our presence and approve the settlement,” he said.

“I can’t believe I’m talking about him in the past tense,” he said. “It doesn’t make sense. This is a nightmare. He always took care of his friends. He has a year-and-a-half-year-old son who didn’t do anything to deserve being left fatherless.”

Avia Antman, 22, also described the attack. “I felt a strong bang on the left, and I shouted to the driver to speed up,” he recounted. “Someone behind me in the car shouted that the driver was hit in the neck. We called security forces on the way. All the air went out of the tires.”

Dr. Ori Yaslowitz, head of the Trauma Unit at the Meir Medical Center in Kfar Saba, provided an update about the condition of the wounded survivors of the attack.

“After they underwent imaging and received first aid, the two wounded men who were rushed to the emergency room at Meir Medical Center are now listed with minor wounds. One is suffering from a shallow shrapnel wound on his upper body, and the second has one on his chest,” Yaslowitz said on Thursday night.

Meanwhile, a huge contingent of IDF forces launched a hunt for the terrorists responsible for the shooting. The commander of the Judea Samaria Division, Brig. Gen. Avi Bluth, announced that three entire battalions had been deployed to the area, along with special forces and various intelligence personnel.

Bluth said the attack had been a well-planned ambush and that dozens of bullets had been fired at vehicles carrying Israelis.

“Recently, we’ve been carrying out major operations to thwart [terrorist attacks]. We’ll get our hands on the cell not too long from now,” he said. “We’ll do everything possible to capture them as quickly as possible.”