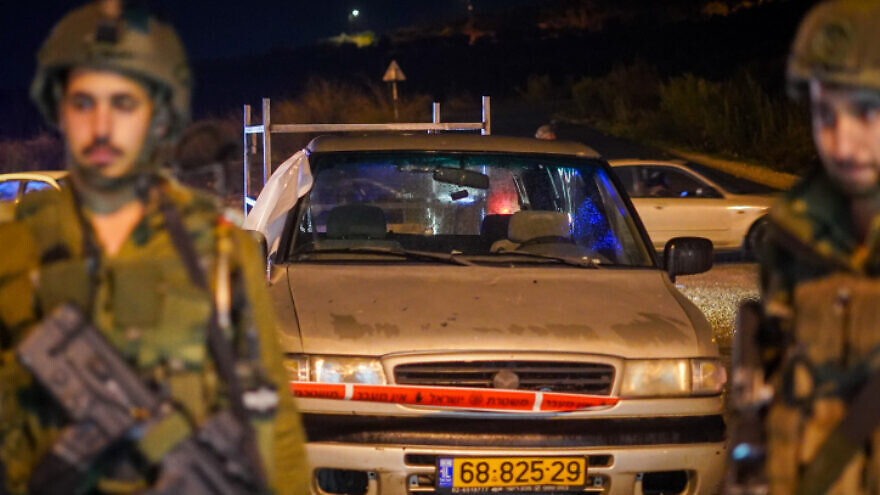 Israeli security forces inspect the scene of a shooting attack near Homesh, in Judea and Samaria, on Dec. 16, 2021. Photo by Hillel Maeir/Flash90.
Spread the word.
Help JNS grow!
Share now:

(December 16, 2021 / JNS) One or more Palestinian gunmen shot at a passing car filled with Jewish seminary students on Thursday night in Judea and Samaria, killing one and wounding two others, said Israeli officials.

Yehuda Dimentman, 25, a student at the Homesh yeshivah, was shot and killed, reported Arutz Sheva. He leaves behind a wife and year-old baby.

Another student was moderately wounded and another lightly wounded, said officials.

According to the report, the three students were brought to the gate of Shavei Shomron, where they received medical treatment by United Hatzalah, Magen David Adom and Israel Defense Forces’ medics.

Security forces believe that two terrorists carried out the shooting, and they are currently pursuing them.

“The security forces will get their hands on the terrorists very soon and we’ll ensure that justice is served,” he vowed.

Defense Minister Benny Gantz said that security forces will “increase our vigilance and readiness to thwart terror in Judea and Samaria, and will continue to take any measures necessary in facing terror groups in the area.”