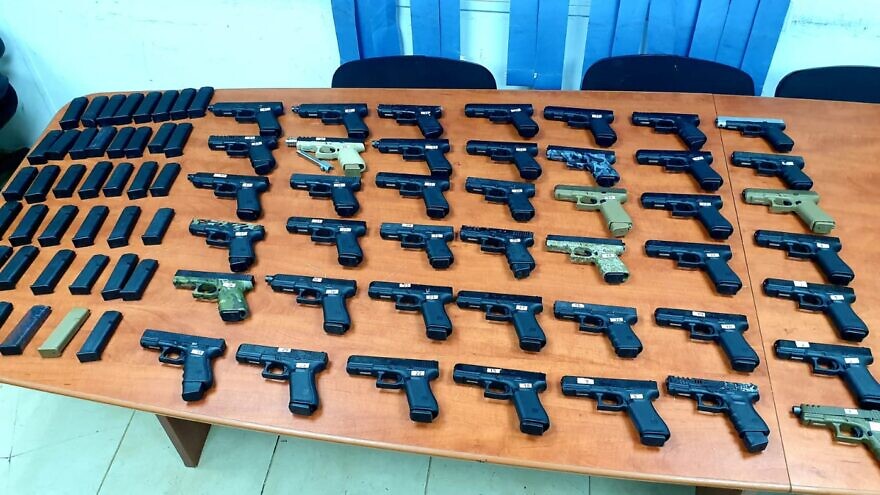 (July 11, 2021 / JNS) Israeli forces arrested three Palestinians on Saturday who had been attempting to infiltrate into Israel from Gaza, according to the Israeli military. The suspects were carrying a number of knives and were interrogated at the scene.

The incident comes a day after Israel thwarted a major arms-smuggling attempt through its border with Lebanon. Israeli forces seized 43 handguns and a quantity of ammunition in the bust worth hundreds of thousands of dollars, according to the Israel Defense Forces.

The smugglers had attempted to cross the border in the area of the village of Ghajar. IDF troops spotted the attempt “using a variety of means, both overt and covert,” said the military.

The IDF is looking into the possibility that the smuggling attempt was carried out with the help of Hezbollah. In the past, weapons smuggled from Lebanon have been used in terrorist attacks inside Israeli territory, including Hezbollah-affiliated activity.

Last week, the IDF revealed that Haj Khalil Harb, a senior member of Hezbollah who served as a security adviser to the group’s leader, Hassan Nasrallah, was involved in drug and weapons smuggling attempts along the Israel-Lebanon border. He served as a commander in important units of Hezbollah.

According to intelligence information, Harb may have been involved in this weapons smuggling attempt as well, as well as another attempt at the beginning of June, in which 15 guns and dozens of kilograms of drugs worth approximately 2 million shekels ($609,589) were confiscated.

IDF troops are continually monitoring the border to prevent harm to the State of Israel and its sovereignty, the army said in a statement.