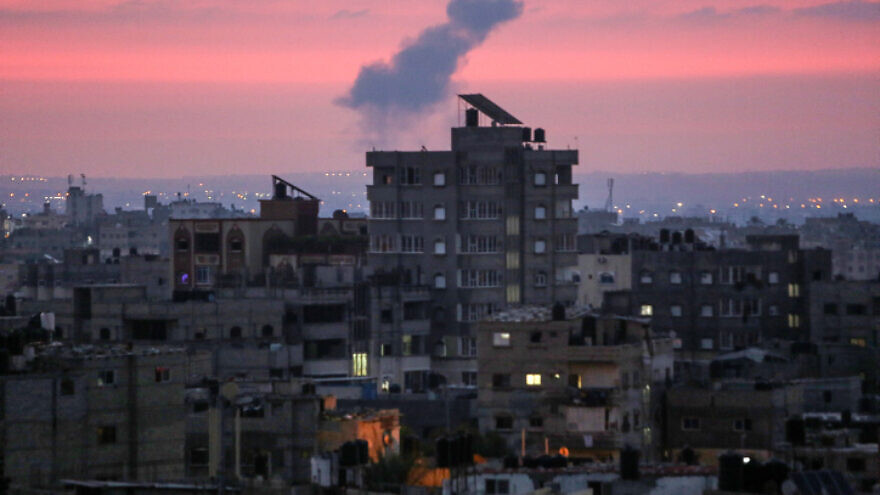 (August 25, 2020 / JNS) The Israeli Defense Forces struck Hamas installations in Gaza, following another day of cross-border arson attacks from the Hamas-ruled enclave, the IDF said in a statement on Tuesday.

According to the statement, IDF jets and tanks hit Hamas “military positions and underground infrastructure,” in response to “incendiary and explosive balloon” attacks on southern Israel on Monday, which Israel’s Fire and Rescue Service said ignited dozens of fires in open fields.

Terrorists in the Hamas-ruled enclave resumed the cross-border arson attacks several weeks ago following months of relative calm, starting dozens of fires in the western Negev region. Multiple rockets have also been fired into Israel from Gaza in recent weeks, including attacks on Sderot and Ashkelon.

In response, Israel has repeatedly struck Hamas installations in Gaza, in addition to closing the Kerem Shalom crossing and the Gaza fishing zone in an attempt to pressure Hamas into reining in the attacks.

Meanwhile, Israel’s public broadcaster Kan reported four Palestinian Islamic Jihad (PIJ) terrorists were killed in a blast in Gaza City late Monday night, citing a PIJ spokesman as confirming that their deaths were caused when bombs they were building, with which to attack Israel, accidentally exploded.

The above reports come as Gaza went into a 48-hour lockdown on Tuesday, after recording its first cases of coronavirus infection outside of the quarantine centers for people crossing into the Strip from Israel and Egypt, according to Al Jazeera. A government spokesman confirmed four cases of COVID-19 in a single family in a refugee camp.

As of early August, 78 people at the quarantine centers were diagnosed with the coronavirus and one patient died, Reuters reported.