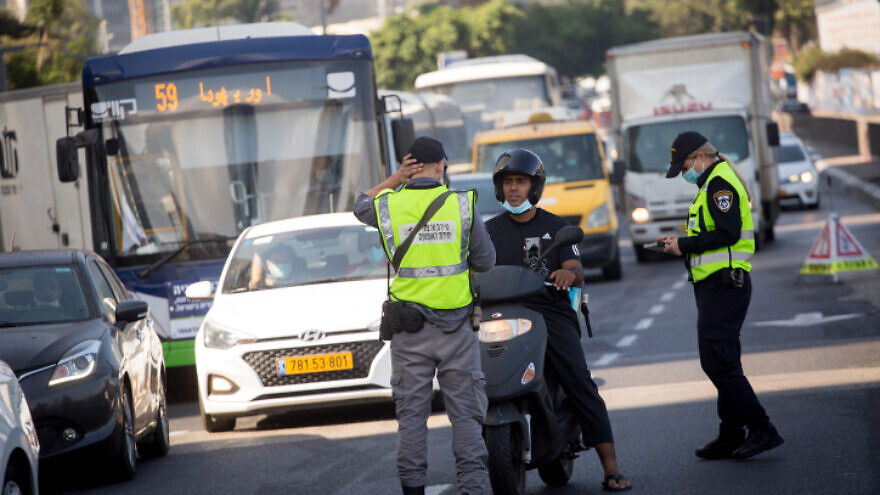 Police set up a temporary roadblock on Menachem Begin Street in Tel Aviv as Israel has seen a spike of new COVID-19 cases, bringing the authorities to reimpose a nationwide lockdown during the High Holiday season, on Sept. 23, 2020. Photo by Miriam Alster/Flash90.
Republish this article
664 WORDS
Spread the word.
Help JNS grow!
Share now:

(September 24, 2020 / Israel Hayom) New figures released on Wednesday indicate that a large number of Israelis who have contracted COVID-19 do not cooperate with epidemiological investigations, concealing the true number of people they came into contact with and routinely violating quarantine directives.

The study, compiled by the Israel Defense Forces’ Home Front Command, has been shared with government and health-care officials dealing with the pandemic. It shows that as of Sept. 20—when around 340,000 Israelis were supposed to be self-isolating at home—at least 140,000 only partially quarantined or did not quarantine at all.

The data was collected from a variety of sources, and senior officials said similar figures exist for other days as well, and that the scope of violations was “extremely troubling.”

According to the officials, while there is no information pertaining to the number of people in home isolation who have contracted the virus, this was a “very concerning phenomenon that doesn’t have a solution.”

Among the main reasons cited for the trend were lacking enforcement and lax punishment. On a daily basis, meanwhile, police officers only check on about half of those who are supposed to be in quarantine. Even the fine levied against violators—NIS 5,000 (around $1,440)—is far lower compared to other countries and is not a sufficient deterrent, according to the study.

But the lack of cooperation with the COVID-19 directives does not end there—according to the study, a worrying number of people who have been confirmed as infected fail to provide full and precise details regarding those with whom they came into contact before testing positive.

The Home Front Command’s COVID-19 headquarters was established for precisely this purpose. Although the headquarters, which was declared operational this week, was tasked with carrying out the tests and managing the specially converted quarantine hotels and isolation facilities, the core of its mission is to sever the infection chain.

The Health Ministry said on Thursday that 6,808 new infections had been diagnosed over the past day, setting yet another negative record as Israel faces stringent lockdown measures over the spike in morbidity.

Of the 54,364 tests carried out between Wednesday and Thursday, 12.9 percent came back positive, the ministry said, bringing the total number of corona cases recorded since mid-March to 206,332, including 1,335 deaths.

The hope is that by administering thousands of epidemiological inquiries per day, with the aim of quickly isolating those who came into contact with infected individuals, it will be possible to reduce the rate of infection or at least control it and prevent its spread.

For this process to succeed, the public must cooperate. The figures, however, show that a large portion of Israelis do not give full and detailed testimony, seemingly so as not to force family members, friends and colleagues into quarantine.

According to studies conducted around the world these past two months, effective epidemiological investigations should reveal that the infected person came into contact with between 18 to 40 individuals prior to testing positive.

It is obvious to those charged with conducting the epidemiological investigations that the information they receive in many of the cases is partial or intentionally misleading.

“Those who hide the information from us aren’t helping their families or friends; they are endangering them,” said IDF Brig. Gen. Nissan Davidi, head of the IDF Home Front’s COVID-19 command center.