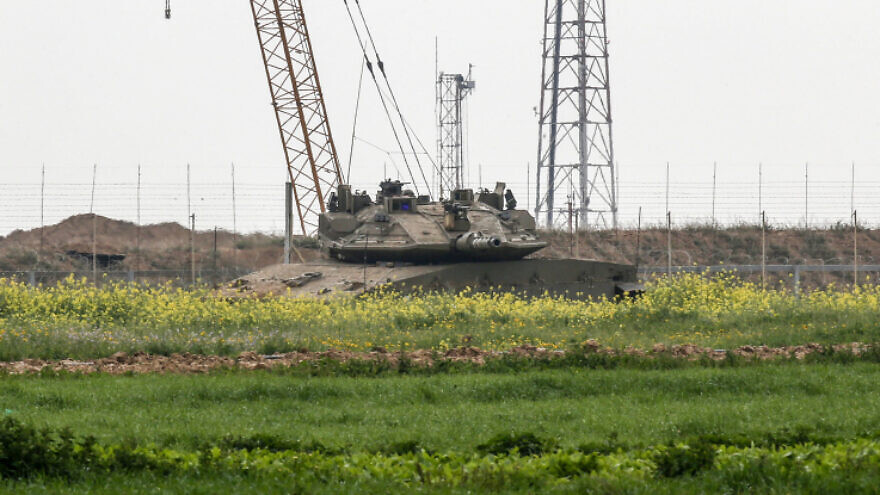 An Israeli Merkava tank seen on the Israeli-Gaza border after Israeli forces killed Jihad Islamic militants while trying to place a bomb along the boder with Israel, east of Rafah, in the southern Gaza Strip, Feb. 23, 2020. Photo by Fadi Fahd/Flash90.
Spread the word.
Help JNS grow!
Share now:

(August 30, 2020 / JNS) The Israeli military struck Hamas targets in the Gaza Strip early on Sunday morning, following another day of arson attacks from the coastal territory.

The Israeli strikes were in response to the ongoing launching of explosive and incendiary balloons from Gaza, the statement said.

Terrorists in the Hamas-ruled enclave have been launching multiple explosive and incendiary balloons into Israel every day for the past few weeks. Several rockets have also been fired into Israel. In response, Israel has repeatedly struck Hamas targets in Gaza.

Saturday’s attacks came as the head of the Qatari Committee for the Reconstruction of Gaza, Muhammad al-Emadi, was in Gaza for talks aimed at restoring calm between Israel and Hamas.

According to the report, the Gaza Communications Ministry said that it had received $30 million from Doha on Aug. 21, a third of which would be distributed to 100,000 needy families. The report said that hundreds of Palestinians lined up at post offices on Saturday morning to receive the $100 allocated per family.

In March, Qatar announced $150 million in aid to the Gaza Strip—to be distributed in monthly payments of $25 million—to support United Nations humanitarian programs there and bolster efforts to contain the coronavirus outbreak.

While the upsurge in violence between Israel and Hamas in recent weeks is believed to be connected to the terrorist group’s demands that the cash transfers from Qatar to the Strip continue, Hamas denies this.