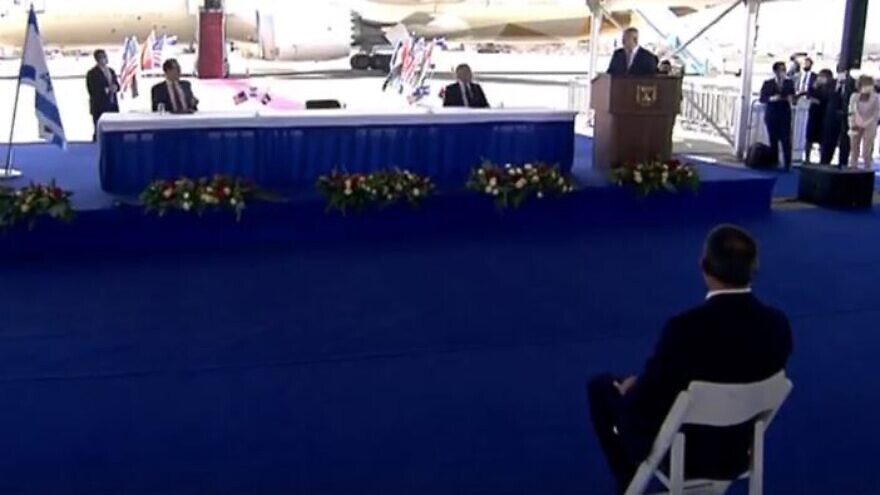 (October 20, 2020 / JNS) The Etihad Airways flight carrying a ministerial delegation from the United Arab Emirates landed in Israel at noon on Tuesday, marking the first-ever official visit from the Gulf state, following the Sept. 15 signing of the U.S.-brokered Abraham Accords at the White House.

Welcoming the delegation on the tarmac of Ben-Gurion International Airport, Israeli Prime Minister Benjamin Netanyahu—accompanied by Foreign Minister Gabi Ashkenazi and Finance Minister Israel Katz—spoke about the preparation of his speech.

“We shall remember this day—a glorious day of peace,” he added.

At the ceremony, broadcast live, the Israeli premier also asked that the Emirati ministers “please convey to the crown prince [Sheikh Mohammed bin Zayed Al Nahyan] our deep appreciation for his groundbreaking leadership. We are working together to change the Middle East for the better. We are all sons of Abraham.”

Ahead of the UAE delegation’s trip to Israel, the UAE Cabinet approved a resolution to endorse the Abraham Accords and full diplomatic relations between Abu Dhabi and Jerusalem, Gulf Today reported.

According to the report, the UAE Cabinet also initiated the constitutional procedures necessary for a federal decree ratifying the peace agreement, expressing confidence that it would boost cooperation and mutual respect between the two countries.

This move came less than a week after Israel’s Knesset overwhelmingly approved the Abraham Accords on Oct. 15, following a unanimous Cabinet vote on Oct. 12.

At the conclusion of the welcoming ceremony, the visiting and local officials—including U.S. Treasury Secretary Steven Mnuchin and U.S. special envoy Avi Berkowitz (who accompanied the UAE delegation on the flight), as well as UAE Minister of State for Financial Affairs  Obaid Humaid Al-Tayer and UAE Economy Minister Abdulla Bin Touq Al Marri—dispersed for approximately four hours of meetings to formalize cooperation agreements, among them a mutual visa-exemption deal.