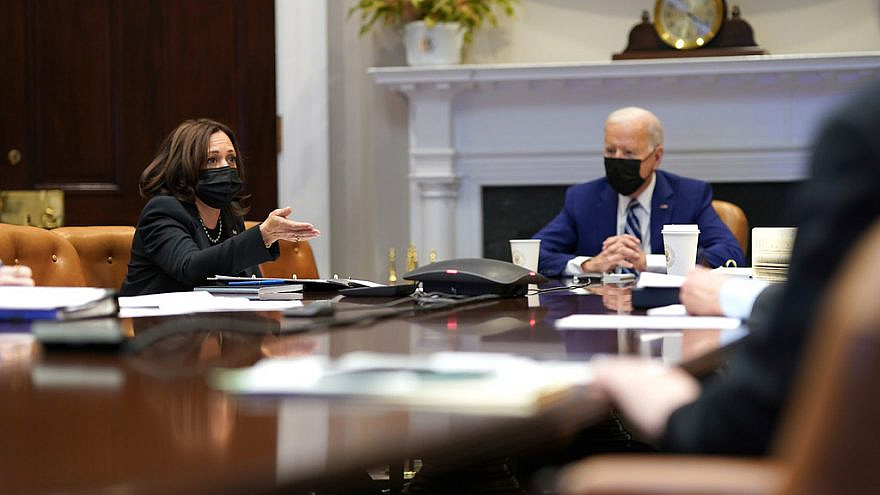 (May 28, 2021 / JNS) Officials from the Biden administration held two virtual meetings with leaders from major Jewish organizations for in-depth conversations about the administration’s response to growing violent anti-Semitic attacks in the United States.

The hour-long discussions held on May 24 and 26 were organized by Melissa Rogers—a senior member of the administration’s domestic policy staff, and director of the White House Faith-Based and Neighborhood Partnerships—at the request of the Jewish leaders following a letter sent to U.S. President Joe Biden on May 21 listing suggestions on how the administration could better combat anti-Semitism.

According to attendee Nathan Diament, executive director of the Orthodox Union Advocacy Center, the meeting included leaders from groups that signed onto the original letter—namely, the American Jewish Committee, the Anti-Defamation League, Hadassah, the Jewish Federations of North America and the Union of Orthodox Jewish Congregations of America.

The conversation was said to have revolved around the groups’ request for the administration to fill certain remaining positions, such as the role of special envoy to monitor and combat anti-Semitism and having a Jewish community liaison in the White House.

“We also talked about more resources for security, both through the Department of Homeland Security and the Justice Department,” said Diament. “There is a range of things that they can do and—they didn’t sign off on any specific things as yet—they were very welcoming of our suggestions and again clearly stated their commitment to taking action.”

He said “statements are important but they’re not sufficient, and so hopefully, these discussions will lead to concrete actions to combat and deter anti-Semitism.”

Diament noted that such action was already seen; after the May 21 letter was sent, both Biden and Harris issued statements denouncing the anti-Semitic attacks on May 24.

One noteworthy aspect of the letter was its call for the administration to preserve a 2019 executive order by former U.S. President Donald Trump on combatting anti-Semitism, which the organizations called a critical tool in effectively fighting anti-Semitism and other forms of hate on North American college campuses, providing guidance on incident prevention, as well as a response for campus administrators and law enforcement.

Elana Broitman, senior vice president of public affairs for the Jewish Federations of North America, was also at the meetings and said the debate proved a good start.

“I can’t really speak to the conversation,” she said, “but I will say they were productive, and we were able to hear from and speak to some senior officials from different departments that had relevant expertise in these issues.”