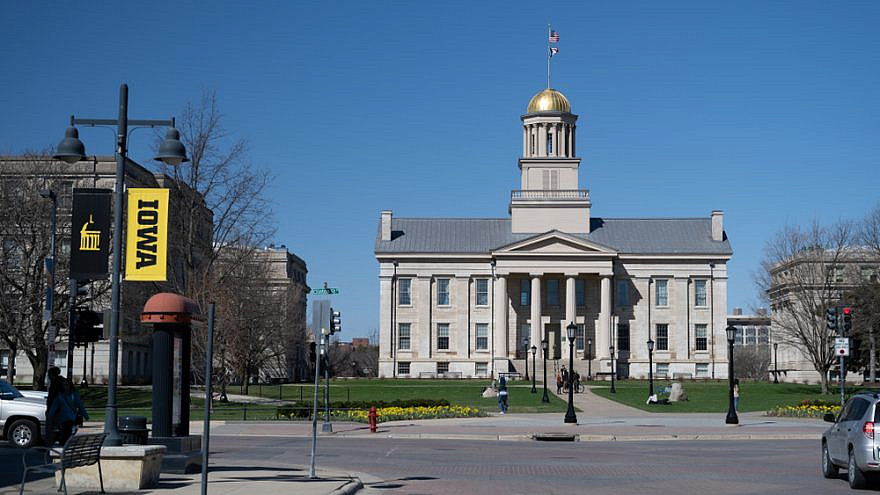 The Old Capitol building on the campus of the University of Iowa. Credit: IN Dancing Light/Shutterstock.
Spread the word.
Help JNS grow!
Share now:

(April 8, 2021 / JNS) The Undergraduate Student Government at the University of Iowa passed a bill on Tuesday to establish a Jewish constituency senator who will begin in the fall semester, reported the student-run publication The Daily Iowan.

The legislation was first rejected on March 24 but brought back for a vote after Jewish students caused an uproar over the need for representation in student government. It passed with 95 percent voting “yes” on April 6.

“At its core, this is anti-discrimination legislation,” said Sen. Prakruti Pancholi while introducing the legislation. “It is our job as USG to condemn all forms of discrimination on campus that undergraduate students face.”

The original bill was amended to include the working definition of anti-Semitism by the International Holocaust Remembrance Alliance.

Another modification, proposed by Pancholi, moved the implementation of the new position from the 2022-23 school year to the current academic year so that a Jewish constituency senator will take office by the fall semester.

“Our main goal in doing this is to provide effective representation as soon as possible,” said Pancholi. “We wanted to make sure that it could happen” on the intended timetable.

The Jewish constituency senator will be appointed by the school’s Hillel. Mollie Chez, the president of Iowa’s Hillel, said there will be an internal election for the position.