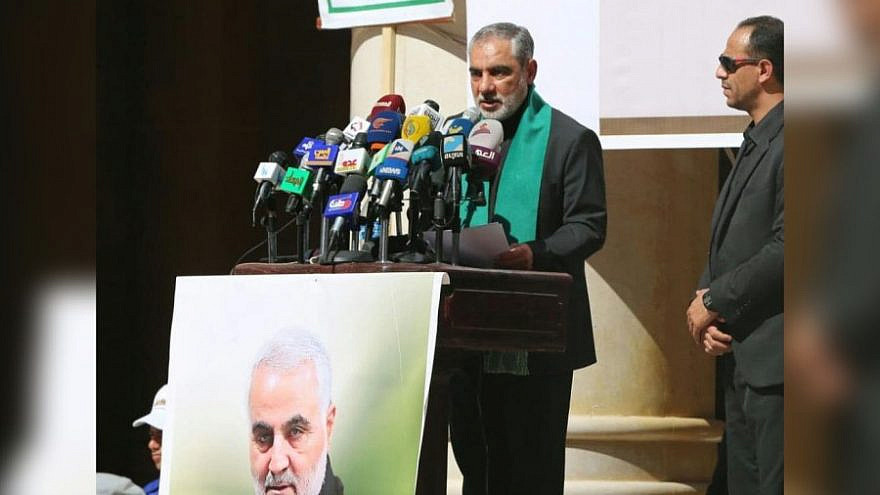 (January 14, 2021 / JCPA) The American and Israeli alerts against the possibility of retaliatory attacks by Iran and its offshoots over the assassination of Qassem Soleimani continue, and the Iranians are pleased with U.S. President Donald Trump’s imbroglio after the attack on the U.S. Capitol building in Washington, D.C. One cannot rule out the possibility that the Iranians believe Trump is weakened and his power is limited, and the possibility of Iran trying to attack American and Israeli targets exists.

Israel, too, is continuing its preparations in its north and south for such a possibility. An Israeli submarine was dispatched through the Suez Canal to the Red Sea to guard against a possible attack by Houthi rebels in Yemen on the naval base in Eilat. The IDF deployed the anti-rocket Iron Dome system in the Eilat area for fear of the Houthis attacking with precision missiles and drones.

According to U.S. sources, Saudi Arabia and Israel increased pressure on the outgoing Trump administration to declare the Ansarallah organization of Houthi rebels in Yemen a terrorist organization and impose sanctions on it before Trump’s Jan. 20, 2021 departure. The Houthi rebels are monitoring Israeli activity through their intelligence service, and they now claim that Israel is secretly assisting Saudi Arabia in the war against them in Yemen. They have announced that they have a “bank of targets” in Israel that they can hit.

The Houthi threat lies not just in the firing of long-range missiles and precision drones (with Iranian assistance in the whole weapons-production process) at Israel. According to Israeli intelligence estimates, the Houthis may attempt to strike Israeli ships sailing in the Red Sea and the Bab el-Mandab Strait region, using naval mines or explosive boats. They have already successfully unleashed these weapons on Saudi targets. In the course of 2020, the international naval coalition destroyed 176 Iranian naval mines deployed in the waters of the Red Sea.

In Oct. 2020, a senior officer of the Islamic Revolutionary Guard Corps Quds Force (IRGC-QF), Gen. Hassan Irlu, was appointed as Iran’s “ambassador” to the Houthi rebels in Yemen. He arrived in Sanaa, a move that has military and political significance, a kind of Iranian recognition of the “state” of Yemen’s Houthi rebels.

This is a new phase in Iranian activity after the assassination of Soleimani: Iran stepping up control of northern Yemen with the close supervision of its new “ambassador,” who specializes in manufacturing and launching ballistic and anti-aircraft missiles. His presence and activities in northern Yemen pose a danger to Saudi Arabia and Israel, which resulted in the Trump administration announcing in Dec. 2020 the inclusion of Irlu on the list of international terrorist operatives.

The United States Treasury issued a comprehensive profile of Irlu’s activities: For years, he supported IRGC-QF efforts to provide advanced weapons and training to the Houthis. He coordinated with other senior IRGC-QF leaders to support the group’s operations throughout the Arabian Peninsula and Yemen. He maintained a relationship with former IRGC-QF commander Soleimani. He has also provided training to Hezbollah members in Iran.

At the same time, the legal and recognized Republic of Yemen’s military court launched a trial against Irlu, accusing him of espionage, sabotage and participation in hostile acts against Yemeni citizens and the Yemeni national army. The prosecutors of the Yemeni army submitted evidence to the court about Houthi rebel contacts with Iran in connection with Irlu’s activities. Irlu has no diplomatic background, and it is even unclear whether this is his real name. A controversy in the Arab world has emerged, since it is unclear how he managed to reach Sanaa despite the Saudi blockade of Yemen.

The Ababil Net website reported on Oct. 19, 2020, that he arrived in Sanaa on a U.N. plane bringing wounded and Yemeni captives, and he used forged documents to pose as one of the wounded. Twelve other Iranian officers specializing in precision missile-and-drone production arrived with him.

Irlu was one of Soleimani’s closest associates. His two brothers were killed during the Iran-Iraq War. He was also close to Brig. Gen. Abdul Reza Shahlai, who was involved in supporting and training Houthi rebels in Yemen, and was suspected of being killed in a Saudi bombing of those rebels.

According to reports, Irlu had trained Hezbollah operatives at the Bahonar military camp north of Tehran. Yemen’s new Iranian “ambassador” is holding discussions with Houthi rebel leaders and even participating in their official ceremonies. On Jan. 2, he attended a large ceremony in Sanaa in memory of Soleimani, and in a speech, he declared, “Yemen is the beating heart of the resistance front and the upper hand of the axis of opponents and hope of the world. Yemen has stubbornly failed and withstands the enemies and sieges the plans of imperialism and Zionism.”

Irlu also visited the grave of Houthi leader Saleh Ali al-Sammad, the head of the Supreme Political Council, who was killed in April 2018 in a bombing in Yemen by planes of the Saudi-led Arab coalition.

Arab commentators suggest that Irlu was behind the terrorist attack at Aden airport two weeks ago when three guided missiles hit, just as a plane carrying new government ministers landed. The terrorist attack killed 26 people and wounded about 100. Yemeni Prime Minister Maeen Abdulmalik Saeed said he had intelligence that Iranian experts carried out the attack.

Placing an Iranian “ambassador” with Houthi rebels in Yemen is a violation of international treaties. This Iranian move shows Iran’s attempt to recover from Soleimani’s assassination and increase its terrorist activities in the Middle East. Iran places great importance on the battle lines in Yemen and wants to directly monitor battle management and political negotiations conducted by the U.N.’s envoy to Yemen. The Iranian military also seeks to monitor the secret contacts of the Yemeni government with Saudi Arabia.

Irlu has been named the Iranian governor of Sanaa, and is tasked by Iran to plan and carry out attacks on Israeli targets, if necessary.

Israel is conducting a very cautious policy with the Houthis in Yemen. Prime Minister Benjamin Netanyahu revealed in Nov. 2019 that Iran had begun equipping the Houthis with precision missiles. Israel has excellent intelligence information about what is happening in Yemen and the Houthi rebels’ ties to the IRGC.

Irlu has become a key figure in the operation of Houthi rebels under Iran’s directions, but Israel is currently not initiating any actions against the Houthis in Yemen. Israel does not seek to open a new front, even though all indications are that Iran plans to turn northern Yemen into a base for attacks on Israeli targets.

According to statements by U.S. President-elect Joe Biden during the election campaign, he opposes the war in Yemen and wants its immediate cessation. Israel is watching developments and judging whether Iran will act to quiet the Yemeni front or escalate its activities in order to put pressure on the new administration in Washington.