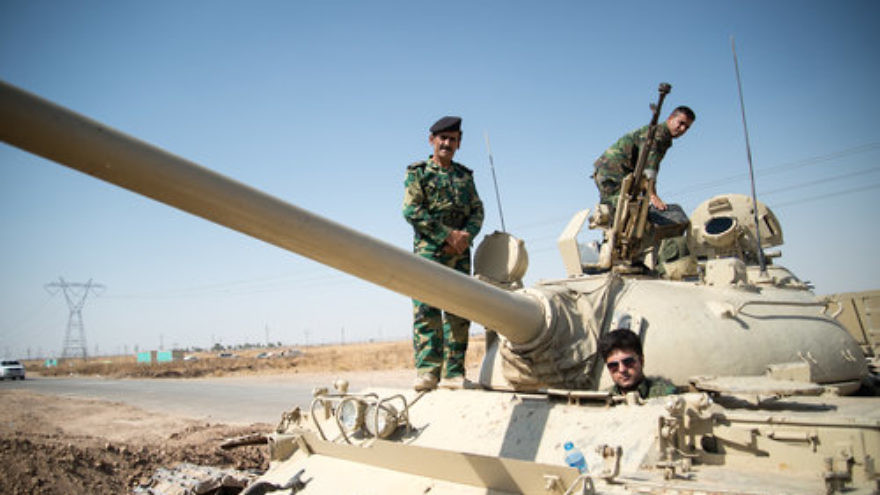 (October 24, 2017 / JNS) While Israeli Prime Minister Benjamin Netanyahu reportedly lobbies world leaders to protect the Kurds as they lose ground in Iraq, some activists and experts feel that the U.S. has sided with Iran in this regional conflict.

The Kurdistan Regional Government (KRG) in northern Iraq is in disarray after losing ground to the Iraqi Army and Iranian-backed Shi’a forces, following the Kurds’ independence referendum in late September. Without significant American backing, the Kurds could stand to lose even more territory beyond the oil hub of Kirkuk.

Dr. Kamal Sido, a Syrian Kurd who works at the Middle East desk for the Society for Threatened Peoples, a German human rights NGO, told JNS.org, “It is the biggest scandal that the Iraqi government is fighting with American weapons against Kurdish cities and villages in Iraq.”

Sido criticized the U.S. for supporting a Shi’a-ruled Iraqi government that is “controlled by the Iranian regime.”

“The Kurds in Iraq and Syria are fighting against radical Islam and are protecting Western values,” he said, adding, “After the Americans abandoned the Iraqi Kurds, Syrian Kurds fear that the U.S. will also abandon them.”

Arif Bawecani, the head of the liberal Kurdistan Independent Party, told JNS.org the effort to conquer Kurdish areas has been part of Iran’s plan since the country’s 1979 revolution—to occupy the entire Middle East and impose Shi’a Islam on the region.

“Iran is also slowly infiltrating the U.S. and Europe through establishing sleeper cells connected to the Shi’ite mosques,” asserted Bawecani, an Iranian Kurd originating from what he considers Iranian-occupied territory.

He added that Iran “has always tried to sabotage and undermine the Kurdish region in Iraq,” and has infiltrated Kurdish political parties.

Regarding Kurdish-American relations, Bawecani said, “Kurds have always been friendly and trusted the U.S., but history shows that the U.S. has sold the Kurds out to occupying powers—Turkey, Syria, Iraq and especially Iran.”

He cited a lack of U.S. assistance during various historical episodes, including former Iraqi President Saddam Hussein’s gassing of the Kurds.

“The Kurds are still friends with Americans, but the U.S. government is not to be trusted,” he said.

At the same time, some Kurds accuse their government of corruption.

Ari Aram, editor of the Kurdish news website Ekurd.net, told JNS.org he is pleased the U.S. and other Western countries understand that the current Kurdish leadership—comprised of what he called “mini-dictators”—is unfit to lead.

“The West is not blind and can see there is no democracy in Kurdistan and that the leaders are seeking money only for their private pockets,” Aram said.

If Kurdistan follows the referendum by officially declaring independence under KRG President Masoud Barzani, “it will be the most catastrophic situation for the Kurdish nation,” he said, adding Barzani would become “a dictator that nobody could stop or remove.”

Aram said that a democratic government is a necessity for Kurdistan, especially in light of the fact that Barzani, whose term ended in 2013, is still in power.

“The leadership is taking billions and billions of dollars of oil income,” Aram claimed, adding that the referendum launched by Barzani was used to “mask the bad situation in Kurdistan.”

Fellow Ekurd.net writer Rizgar Khoshnaw, who is based in Washington, D.C., blasted Barzani’s foreign advisers for the referendum.

“The U.S. is 100% with Baghdad now!” he wrote in an email to JNS.org. “The U.S. did not abandon the Kurds—the Kurds did not listen to the U.S. when they were told to postpone [the independence vote].”

Despite his criticism of the KRG, Aram is pleased that Israel was the only country to publicly endorse an independent Kurdish state in advance of the referendum.

“I personally have loved Jews and Israel since I was a teenager and always supported Israel, and respect it more when I see its democracy….If our Kurdish ‘leaders’ had just 20 percent of your (Israel’s) patriotism, we Kurds could make bigger progress,” he said.

Phillip Smyth, a researcher specializing in Shi’a Islamist groups at the University of Maryland’s Laboratory for Computational Cultural Dynamics, told JNS.org there is always the chance of Iranian-controlled Shi’a militias increasingly moving into Kurdish areas of Iraq.

“There is also the possibility that [Iraqi Prime Minister Haider al-] Abadi feels emboldened to push towards other Kurdish positions after the success in Kirkuk,” he told JNS.org.

“Regardless,” said Smith, “it’s really too soon to tell where Abadi, numerous Shi’a militia groups and Kurdish forces may take this.”