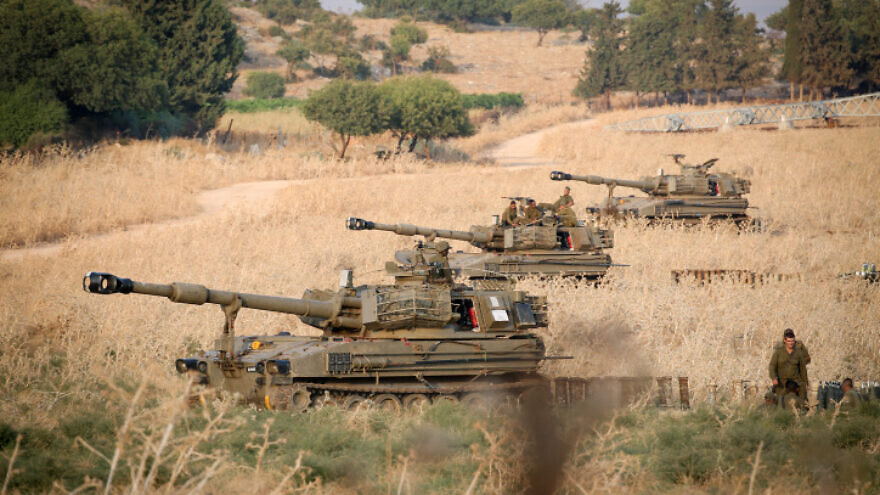 Israeli army forces stationed near the border between Israel and Lebanon in the Golan Heights on July 27, 2020. Photo by David Cohen/Flash90.
Republish this article
644 WORDS
Spread the word.
Help JNS grow!
Share now:

(May 13, 2021 / JNS) Terrorists in Lebanon fired three rockets over Israel’s northern border on Thursday night. This latest attack on Israel comes as Hamas fired massive rocket salvos at central Israel and Ben-Gurion International Airport, as Israel continues its massive bombardment of Hamas targets in Gaza and as violent Arab rioters attack Jews in a number of cities and communities across the country.

Yossi Kuperwasser, director of the Project on Regional Middle East Developments at the Jerusalem Center for Public Affairs, told JNS the attack from Lebanon is not a cause for major concern, as it likely “means very little” and that it is “probably some Palestinian terror group trying to show its solidarity with Gaza.”

He added that Hezbollah “distanced itself” from the terrorists, and there are reports that they were apprehended.

According to Lebanese news outlet The Daily Star, the rockets were fired at Israel “in apparent support of Palestinians confronting Israeli attacks on Gaza.”

Elliot Chodoff, a political and military analyst specializing in Middle East conflict and the global war on terrorists, told JNS that he would be “astounded” if it was Hezbollah who fired the rockets.

“The reports coming out seem to point in the direction that it was Palestinians, probably Hamas, who fired the rockets,” he said.

He noted that since the 2006 Lebanon War against Israel, Hezbollah’s calculations have changed, and “all the indicators are that Hezbollah has moved to an all-or-nothing position for a whole bunch of reasons.”

One of those reasons is that Israel has warned in the past that it would deal Hezbollah a “crushing military blow” if the terrorist organization made the mistake of attacking.

In February, when Israel’s military conducted drills in the north near its border with Lebanon, Hezbollah chief Hassan Nasrallah warned Israel that any attack would be reciprocated.

“We are not looking for a confrontation, but we don’t leave the blood of our martyrs. If a confrontation happens we will respond to it … if you attack our cities we will attack yours,” Nasrallah said in a televised speech.

‘Hezbollah going in now would be a waste’

In April, while touring the IDF’s Northern Command with senior military staff, Israeli Defense Minister Benny Gantz warned Hezbollah that it will suffer “heavy consequences” if it takes any action against the Jewish state.

Hezbollah has been caught in the past laying plans for an eventual attack on Israel. One such event took place beginning in 2018, when Israel’s military eventually discovered six tunnels dug under the border from Lebanon into Israel.

According to Israeli intelligence sources, Hezbollah receives funding and support directly from Iran.

Chodoff said the Iran connection with regard to Gaza and Lebanon “is critical,” adding that one should not confuse the relationships Tehran has with Palestinian organizations in Gaza and its relationship with Hezbollah in Lebanon.

According to him, the two arenas are distinct. He said he believes that the Iranians are behind the conflict in Gaza, in addition to other reasons for Hamas’s attack on Israel.

“Iran will fight to the last drop of Palestinian blood without batting an eyelash,” said Chodoff, but noted that while Iran will use Hezbollah to attack Israel at some point, “Hezbollah going in now would be a waste.”

He also said Iran knows that if Hezbollah gets involved in a conflict right now, Israel will unleash its massive military capabilities against the terrorist organization and “set them back at least 15 years.”

While Hezbollah controls everything that happens in Lebanon, Chodoff noted that “two guys in a bush” could easily attack Israel, which is apparently what occurred on Thursday night.

His assessment? “Hamas is trying to draw Hezbollah into the conflict.”

“Hamas is hoping for a repeat of 2006 when the conflict started in Gaza against Hamas and ended up in Lebanon against Hezbollah,” he said. “Hamas would like a rerun of that.”