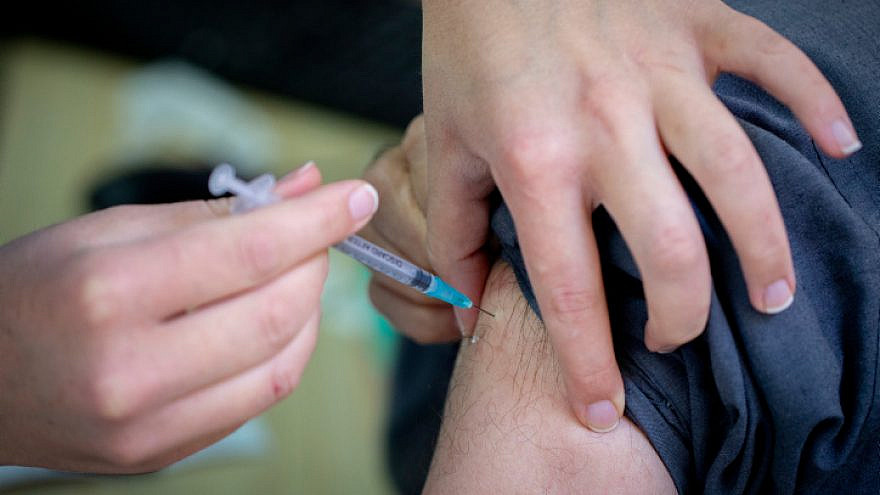 (December 24, 2020 / Israel Hayom) Israel is the world leader in the number of administered COVID-19 vaccine doses per 100 people, according to findings from the Our World in Data research institute.

As of Dec. 22, according to the study, 8.3 Israelis out of every 1,000 have received the first dose of the vaccine. As of Wednesday, 140,000 people, or 1.5 percent of Israel’s population, had been inoculated. Of those who received the vaccination, 65,000 were inoculated on Wednesday. The Pfizer vaccine requires two doses, administered 21 days apart, to be effective.

After Israel is the United Kingdom, which by Dec. 21 had administered 0.74 doses of the vaccine per 100 people. In other words, 7.4 Britons out of every 1,000 have been inoculated.

Due to its tiny population, the Jewish state is expected to continue to remain at the top of the list.

According to the Ministry of Health, 44,657 people were vaccinated against the coronavirus on Tuesday, 23,000 on Monday and 6,600 on Sunday.

According to Our World in Data, 2.4 million people have been vaccinated against the coronavirus worldwide—1 million of them in China. In the United States, 614,000 have received the vaccine; in Russia, 200,000; and in Canada, 26,000.

In an interview with Army Radio on Thursday, Health Minister Yuli Edelstein said that within a couple of weeks, Israelis under the age of 60 will be eligible to receive the vaccine. Thus far, the vaccination campaign has been directed at medical workers and those 60 and older.

Dr. Sharon Alroy-Preis, who heads the ministry’s public health department, stressed that the upcoming countrywide lockdown would not prevent Israelis from leaving home to be vaccinated, saying the lockdown “should not stop this critical process.”

Israeli Health Ministry figures indicate that 3,805 new cases of the coronavirus were confirmed by Thursday morning out of the 91,174 tests performed at an infection rate of 3.3 percent. There were 497 people in serious condition, with 117 on ventilators. Israel currently has 29,997 active cases, three times as many it did two weeks ago. So far, 3,150 people in the country have died of the disease.