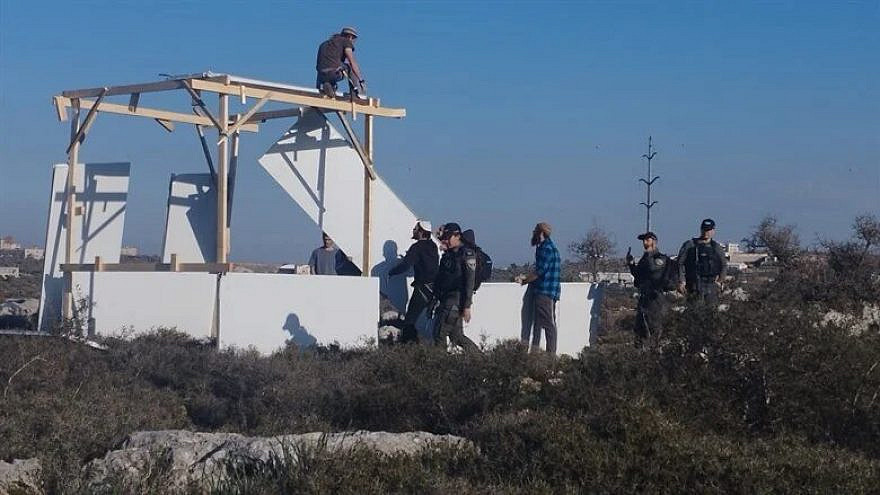 Israelis attempt to rebuild the Or Chaim outpost in Samaria after it was demolished, Jan. 22, 2023. Credit: Courtesy.
Spread the word.
Help JNS grow!
Share now:

(January 22, 2023 / JNS) Israelis attempted on Sunday to rebuild an outpost that was destroyed last week, amid tensions within Prime Minister Benjamin’s coalition over the issue.

Security forces stopped the activists from erecting structures at the site in Samaria and arrested several people.

A statement released on behalf of the families building Or Chaim said they would “continue to hold on to the hilltop even if we are evacuated 100 times.”

The Or Haim outpost, which commemorates Rabbi Haim Druckman, the spiritual leader of the religious Zionism movement who died on Dec. 25 at age 90, was demolished on Friday at the direction of Defense Minister Yoav Gallant.

The move caused friction with Finance Minister Bezalel Smotrich, who opposed the decision and instructed members of his Religious Zionism Party to boycott Sunday’s Cabinet meeting in protest.

Smotrich, who also holds the post of minister in the Defense Ministry, has been tasked by Prime Minister Benjamin Netanyahu with overseeing the Civil Administration, the ministry’s body responsible for approving construction and handling other bureaucratic matters in Area C of Judea and Samaria.

“Minister Smotrich issued an order [Friday] morning, in accordance with his authority…to stop the evacuation and to take no action until he could hold a discussion on the issue at the start of the week,” said a statement from Smotrich’s office.

“Defense Minister Gallant ordered the evacuation to go ahead despite this, without consulting Minister Smotrich and completely against the coalition agreements that form the basis for the existence of the government,” it added.

“The government supports settlement but only when it is done legally and is coordinated in advance with the prime minister and security officials, which was not done in this case. The prime minister will convene a discussion on the issue early next week,” Netanyahu said in a statement released by his office.

Israeli National Security Minister Itamar Ben-Gvir demanded on Sunday that laws be applied equally to Israelis and Palestinians in Judea and Samaria.

He circulated a document during Sunday’s Cabinet meeting outlining illegal structures built by Arabs in Judea and Samaria over the past month, and demanded that they also be destroyed.

Khan al-Ahmar is one of more than 170 illegal outposts created by the Palestinian Authority and funded by the European Union, according to the Regavim NGO.